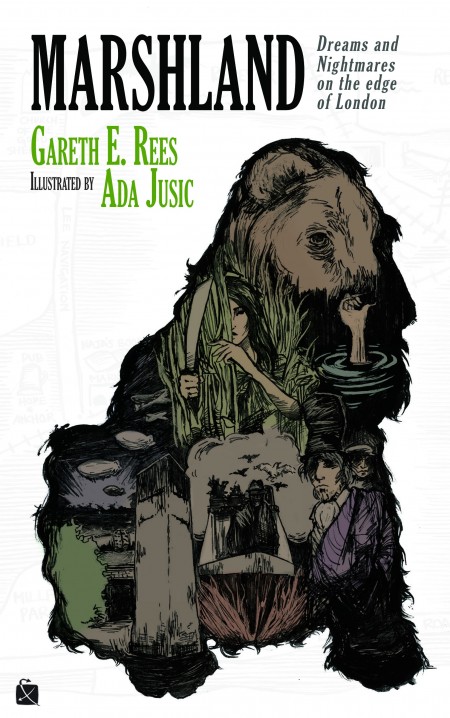 We enjoy a strange book, an imaginative, weird and uncategorisable exploration of the East London marshes…

“What is this book?” you might ask on finishing it. Entertaining, enlightening and a fluent read, certainly. But as a whole it doesn’t fit any genre: ghost stories are mingled with memoir, local history with magical realism, steampunk fantasy with feature journalism, comic strip with travel writing.

This is because it grew out of a blog by Gareth E Rees, a settled-down parent of young children, who has to find his adventure close to home (he’s also a sometime Dabbler). It’s a record of a fiercely active imagination tethered to a single place. Thankfully, this place is the scrubby, scummy but sometimes bucolic stretches of East London marshland that sit between the city and the suburbs; there’s plenty to feed off.

Despite the variety of form, it hangs together very well, leaving one with a many-layered but acute sense of place. Chapters, like a series of odd-shaped baubles, are connected by the string of Rees’s roamings with his dog, Hendrix, cocker spaniel and embodiment of the author’s snuffling curiosity.

My own favourite chapters from this literary salmagundi are the ghost stories. One particularly clever and effective one uses a haunted residential conversion of a factory building to revisit the awfully distant day before yesterday. The budget minimalism of your off-the-peg ‘luxury apartment’ slips queasily to reveal a 70s factory office of ashtrays, index files, typewriters and topless calendars.

There are so many byways in this vagarious book. But it wouldn’t be fair to tell you very much more – it would only spoil the enjoyment to be had from scrambling over Marshland’s dreamscape. Rees is an annuated, psychogeographic Tintin, complete with Snowy, but confined by grown-up responsibilities: follow him on his adventures and you won’t go far in space but, my word, you will in every other dimension.

But what to call it?

You can buy Marshland here from the rather marvellous Influx Press.

And here’s a taster:

[from Chapter IV, A Walk By the River]

On the top of the incline, a man broke cover, lurching with tilted gait, arms stiff at his side. He wore a John Lennon glasses and a raincoat, despite the sunshine. There was something unsettling about the way his haircut – the lank, angular curtains of a 1970s British Rail ticket inspector – contradicted his Peter Sutcliffe beard. It wasn’t right. He was like a composite of people I half-remember from public information films when I was a child. To compound my terror, the strains of ELO’s ‘Mr Blue Sky’ crackled through the foliage from a radio in the warehouses on the far side of the river. I followed the man for a while, keeping myself concealed, ducking behind a tree whenever he turned around. Eventually he took a sharp turn into the woodland and lumbered across the open marsh.

As I watched from behind a bush, I thought to myself: yes, for certain, that man is some kind of weirdo stalker.

Walking deeper into the woodland I came across a group standing in the trees. I couldn’t believe what I was seeing. African women in brightly kaleidoscopic head-wraps stood in a semi-circle. The men, dressed in white robes, formed an inner circle, holding wooden swords outstretched, tips meeting above the head of a girl, perhaps ten or eleven years old. They waited silently for me to pass, smiling. I smiled back but couldn’t think of anything to say. I wasn’t even sure they were there. They were figures from the dreams of another. I had become a bit part in the dengue-fevered fantasy of a sick city.

4 thoughts on “Marshland: Dreams and Nightmares of the Edge of London”