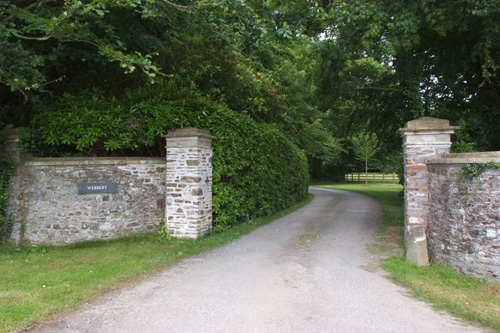 Last night I dreamt I went to Webbery again. The winding drive with massed rhododendrons on either side, the grey stone manor house shining in the moonlight…

I’ve always wanted to write that. And it’s true. I do have a Manderley in my past and, like the fictional one, it was in the west country, just outside Bideford in Devon. It wasn’t right by the sea like Manderley, but you could catch a glimpse of the sea if you climbed the barbed wire fence surrounding the cow pasture. I still have the scar on my leg to prove it. I’ve been thinking about Webbery lately because of an unfortunate incident with my six-year-old grandson. One day my daughter told me that he has developed a fear of becoming an orphan. “Goodness,” I replied, “Whatever could have brought that on?” My daughter gave me an accusing look. “Well Mom,” she said, “You’re the one who told him the story of Oliver Twist.” I had to plead guilty. Obviously my efforts to further his literary education had gone awry. My own children learned to use the word Dickensian in a sentence before they were old enough to read an actual Dickens novel. They used it to describe my stories of an English childhood. To their pampered American ears my tales of unheated bedrooms and meals of marmite on toast and suet pudding sounded, well, positively Dickensian. And then there was the fact that I did spend a brief time in an actual orphanage.

It must have been a holdover from the wartime evacuation program that sent children from the cities into the relative safety of the countryside. By the early 1950’s it had become a program to give city children suffering from pollution a holiday in fresh country air. All paid for by the National Health. The winter before I turned five I had a series of severe chest colds. I don’t remember being sick but I do remember the thick yellow fog. It was the great “Pea Souper” that suffocated London in the winter of 1952 killing 12,000 people in four days. The family doctor recommended a holiday in the country and so the following summer I was sent to a children’s home in Devon called Webbery.

I remember walking to the station between my parents with a new satchel strapped to my back. Then having a label tied to my coat button and sitting in the train with a group of other children and a kind older woman in a navy blue nurse’s uniform. I remember the winding drive bordered by shrubbery and then the largest, most imposing house I had ever seen. It must once have been a grand mansion for some wealthy family but now it was a rambling maze of shabby, utilitarian rooms smelling of disinfectant and cabbage. I entered a strange world of confusing rules, eccentric characters, dreadful food, and rough children, many of whom were actual orphans. They regarded us summer visitors as softies. There was one Cockney orphan girl of flamboyant personality who shocked us all by jumping up and down on her bed pulling down her knickers, which looked big and baggy enough for a grown woman. We all gave up the clothes we arrived in and were dressed from the shared collection of ill-fitting cotton frocks and shabby underwear. We were not allowed to keep any of the care packages we received from home. The candy was all put into a large tin and every evening we sat on the floor in the assembly room and were issued three sweets each. But there were many transgressions that could cause a child to lose sweets. Most senseless of all: if you wet the bed the night before you lost one sweet, if you went to the toilet you lost two sweets, and if you went to the toilet and flushed you lost all three sweets.

Yes, it was an Orwellian world complete with propaganda and controlled messages to the outside. Every Sunday we had to write a letter home. Suggested sentences were written on the blackboard for us to copy. One Sunday I painstakingly wrote the story of my fall into a ditch full of stinging nettles. How I developed a horrible itchy rash from head to toe and lay in bed for the rest of the day covered with calamine lotion. When my letter was checked it was taken away and I was made to sit down and write another, copying a sentence from the board, “I am very well.” Other miserable moments took place in the refectory. We had to eat everything on our plates before we were allowed to leave the table. Some children spent many hours sitting staring at congealed greyish gravy or the big foul-smelling broad beans we were frequently served. My turn came when my breakfast boiled egg was undercooked and I couldn’t bring myself to eat the slimy white part. My tears dripped into the unappetizing mess. But we also had plenty of fun and played imaginative games. I loved playing outside in the grounds, despite the nettle incident. We would creep into the rhododendron bushes away from the prying eyes of our minders. Once past the outer canopy of leaves it was like being inside a large tent with plenty of space to play, the noise from outside muffled, our secret world. We built houses for fairies and elves out of leaves and sticks and flower petals. We went for long walks in the countryside even when it rained. Inside my favorite game was Jacks, which we played for hours with intense competitiveness.

Some of the Webbery staff I remember vividly. There was Nurse Viney, a big-boned country girl with bright red cheeks and chapped hands. She presided over our baths with rough efficiency. We were each dunked into the same bath water, vigorously scrubbed with medicinal smelling soap, and lifted out into coarse towels to make room for the next child, all lined up naked waiting their turn.  It was obvious that Nurse Viney didn’t really like children; she seemed to deliberately grab us too tightly, scrub too roughly, and push us towards the towel holder with a shove, yelling instructions the whole time. I thought she would be much happier caring for animals on a farm. Another misfit was a Scottish woman of a certain age who taught us deportment. She demonstrated the correct way to walk, placing the toe down before the heel. That was supposed to be the ladylike way to walk, but it felt very awkward as we tripped and wobbled our way across the room trying to emulate her elegant steps. She also walked around with a book balanced on her head to teach posture, a trick that looked a lot easier than it was. The class was accompanied by the thud of books crashing to the floor and the sound of our barely suppressed giggles. In retrospect I think of her as a Miss Jean Brodie well past her prime, and wonder what turns of fate brought her to a children’s home in Devon. The Head Matron was Miss Gee, a woman who seemed quite elderly to me at the time but maybe wasn’t even as old as I am now. She was a sweet, kindly person who for some reason took a special liking to me. Perhaps I was more refined and malleable than the orphans. Every evening I was invited to her room in the far upper eaves of the house, probably in what were once servant quarters. She sat in a cozy armchair dressed in full nurse regalia with a starched cap, asked me about my day, and gave me a sweet, an extra on top of the rationed three and not subject to any withholding. I accepted this privilege without question. For years afterward our family received a Christmas card from Miss Gee, until some time when I was a teenager they stopped and we assumed she had died.

I’ve often wondered what became of Webbery. Surely it couldn’t have continued as a children’s home into the modern era. I thought the grand old house would be suitable for a private home, a posh school, or perhaps a country hotel. My last guess turned out to be the correct one. I found Webbery on the Internet. It is now a 5 star holiday resort, “a haven of rural peace and tranquility where the old values of warmth and hospitality are foremost.” Perhaps I will stay there one day and creep inside a rhododendron when the proprietors aren’t looking.

As for my grandson, I have hidden away the children’s version of Oliver Twist I purchased for Christmas. The first pages describe the newborn baby Oliver lying beside the body of his dead mother in the workhouse. I will try to be a more responsible grandmother in my literary selections in the future. Perhaps a book of fairy tales? Oh, but there is that one about the wolf eating the grandmother. Children’s literature can be a minefield, even for a librarian.