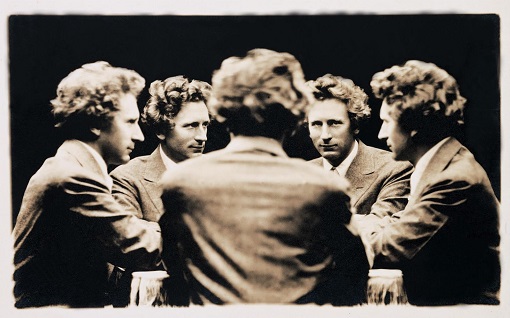 Expect the unexpected with Mahlerman’s selection of festive music…

Drifting very slightly off-message this Christmas, the ‘day of birth’ refers not just to the child, but to the fresh, seraphic world-view of all children at the moment of birth. The English composer Gerald Finzi‘s taste was always meditative rather than dramatic, and in perhaps his greatest work Dies Natalis, he turned for inspiration to the 17th Century mystic poet Thomas Traherne, a ‘shoemaker’s son of Hereford’ of whom very little is known. The four sections that follow the opening Intrada for string orchestra, are for ‘high voice’ and, these days, are usually sung by a tenor. From this touching and admirably written cantata, here is the fifth section The Salutation, set in the form of a Bach chorale prelude but very definitely out of the modal school of Ralph Vaughan Williams.

‘A day without Bach is a barren day’ (Van Dyke Parks), and Christmas without the great Lutheran master is, for me, unthinkable. Today, as an early Christmas present to myself, a piece that sounds Christmassy, but isn’t, combining as it does, high art with low vulgarity. In 1713 JS Bach produced what has become one of his best loved secular works, the Hunt Cantata BWV 208, containing one of the most beautiful of all Bach’s arias Schafe konnen sicher weiden, as we know it Sheep may safely graze. The idea that anybody would seek to ‘rearrange’ this melody of surpassing beauty is unimaginable – particularly if that body were….whisper it….Australian. But Percy Grainger was not any old Aussie, and though blessed with a humorous and eccentric nature, these traits did nothing to conceal his essential seriousness as a musician, first as a world-class concert pianist and later an original composer and musical thinker – and for evidence of this, look no further than the very first of my Lazy Sundays back in September 2010. Under the title Exquisite Miniatures you can still find Grainger’s wonderful arrangement of Birthday Boy Benjamin Britten’s ‘Shallow Brown’.  Today, his marvellous ‘ramble’ (for that is what he called his arrangements) through BWV 208 becomes Blithe Bells, with the innocence of Bach’s tune ‘augmented’ by ‘tuneful percussion’ and concert-harp effects. I find it at least as moving as the original – how say you, Dabblers?

One for the little bitty baby
Born, born, born in Bethlehem

Like ‘The Twelve Days of Christmas’ and ‘Ten Green Bottles’, Cumulative or Counting Songs are popular with children because verses build upon previous verses and are therefore easy to learn and remember. They are also a staple of the gospel tradition in the southern states of America and here is one of the best, Children, Go Where I Send Thee, discovered in a black school in Kentucky by the “Mother of Folk’ Jean Ritchie, 91 and still going strong as a singer, songwriter. It is played here by the wonderful gospel trio The Sojourners, with the no-small contribution of master-guitarist Steve Dawson.

Very few musicians emerged from the ‘flower-power’ era of the 60’s and 70’s with much credit, but in pieces like Song for Athene and The Lamb, written in the 80’s and 90’s, the late John Tavener (he died on November 12th) found his own distinctive voice and with it, a world wide audience of millions. Set to a poem by William Blake in the collection of Songs of Innocence and Experience (another, The Tyger, we looked at a couple of months ago in Mystics and Dreamers) this brief, mesmerizing work is nominally an anthem but in fact it sounds more like a carol. Scored for 4-part unaccompanied choir, the upper part can be sung by boy trebles or, as here, sopranos. It came to the composer Mozart-like and fully formed, during an afternoon car journey in 1982; he just had to write it down, or so he said. A complex character, mixing vanity (Jesus hair, hard drinking, zealous driving in fine automobiles) with humility, he believed his ‘gift’ was in fact a fully finished entity delivered from God and composed before the beginning of time. The music was already there, waiting for him to unwrap it. It certainly fits that rather florid description.

A composer of the second rank, usually damned by faint praise (‘…his music is distinguished by good workmanship’.), John Ireland produced some touching compositions, mostly in smaller forms, and influenced by the harmonic mannerisms of Debussy and Ravel. To lower the curtain on the Dabbler Musical Christmas (and the Dabbler Musical Year), a short orchestral ‘carol’ The Holy Boy, revealing a complete lack of musical ambition and, to these ears, the better for it.