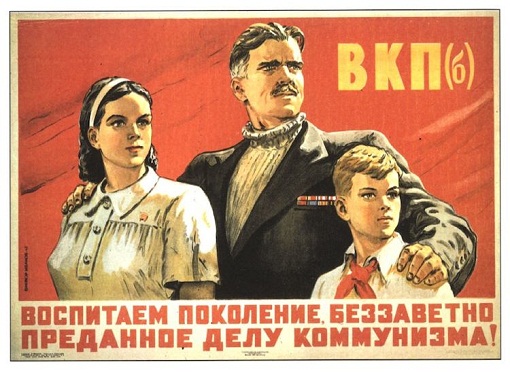 The Stalinist era’s climate of fear shaped the work of dozens of composers. This week, Mahlerman examines Soviet music…

A few months ago in Degenerate Music  we looked at Adolf Hitler’s totalitarian response to anything in ‘the arts’ that failed to meet the exacting Nationalistic standards he had set out, after the Enabling Act made him Germany’s all-powerful Fuhrer.  The single Party he conjured up, at the same time as banishing all other parties and liquidating or imprisoning their leaders, ensured that his belief in the core values of classical German art, literature and music were acceptable, and should be promoted and treasured.  Those whose art, for whatever reason, was deemed unworthy were simply removed and, along with Jews, Communists, gypsies, alcoholics, homosexuals and prostitutes, were packed-off to the camps and almost certain death.

In Russia Joseph Stalin also favoured a single Party system, surrounding himself with a small coterie of yes-men who would, unquestioningly, do his bidding – but although Communism was about improving life for everybody, the old fraud wasn’t above removing or eliminating political opponents, who were usually arrested and tortured, or sent to the gulags.

However, on a personal level, these two malevolent ghouls had little in common.  Adolf believed that women should be idolized, as they represented a vital building block in the concept of Lebensraum, the assumed notion of Aryan superiority.  For Joe, women were child bearers and cheap manual labour – in short, they could be exploited (and they were).  Hitler’s favourite composers were Beethoven, Bruckner, Lehar (he adored The Merry Widow) and, above all, Richard Wagner.  The idea that Stalin was a deeply uncultured man held sway for most of the sixty years since his death, but recent studies have revealed that although his tastes in literature and music were narrow (he liked folk music, and he appreciated a ‘good tune’), he was anything but the vulgarian of our imagination.  But the unvarnished truth of the Stalinist era is that the climate of fear he created, influenced dozens of artists, and shaped the music that they felt able to write.  Today we look at some of them.

For a man sometimes known as the Father of the Soviet Symphony it seems extraordinary that we hardly ever hear any of the symphonies of Nikolai Myaskovsky (and there are twenty-seven) in the West.  An almost exact contemporary of Rachmaninov, he lacks that master’s amazing melodic gifts, but there is not a bar of his music that is not beautifully fashioned, and at least half-a-dozen of his symphonies are masterworks.  I am not too sure what formalism means, but along with Shostakovitch, Prokofiev and others, Myaskovsky was accused of promoting it in 1948 by the Central Committee of the Communist Party.  I can only guess that because a number of his works are rather sombre and pessimistic, this characteristic did not sit well with ‘the Party’;  how does anybody explain the madness that went on at that time?  Here is a wonderful passage from the concluding pages of the slow movement of his Symphony No 25, dating from 1946.

In 1930’s Russia anything that had been uttered by Vladimir Lenin was sanctified, and the bourgeois character of Stalin ensured that the flame continued to burn.  Lenin’s badly thought-out statement that ‘Art belongs to the people’  was writ large, and the net result was that composers of the twelve-tone school, plus the likes of Bartok, Stravinsky, Hindemith and others were effectively banned, as representing a decadent, imperialistic, capitalistic formalism; in simple language they were ‘modern’, and could be ‘dissonant’;  such music did not meet the brief.  Back into this atmosphere (from America and Paris) stepped the enfant terrible  Serge Prokofiev – and he stayed until his death on the same day as Stalin in 1953.  As a super-confident teenage virtuoso, Prokofiev had burst into prominence with his First Piano Concerto in D flat, while still a student.  A couple of months later, while still studying at the St Petersburg Conservatory, he began work on the even more extraordinary Second in G minor, a concerto that is considered perhaps the most challenging in the whole canon.  By turns lyrical, and daemonic, it turns the traditional idea of a concerto inside-out.  The comfortable fast/slow/fast three-movement structure is dumped, in favour of two massive outer movements framing two quicksilver inner intermezzi, the first lasting about 150 seconds.  This music, like most of Prokofiev, will not reach your heart, but it may make your jaw drop, and most of the light and shade is on display in the staggering solo cadenza in the first movement (the climax is marked colossale) played here with seemingly utter contempt for the difficulties, by the Chinese virtuoso Yuja Wang.

‘I set down a beautiful chord on paper – and suddenly it rusts’.  This remark by the late Alfred Schnittke, a Russian composer of German/Jewish extraction, goes some way to explaining the unique sound-world created by this marvellous talent.  The musical ‘language’ he used was so compound and multi-faceted, that the word he used to describe it was ‘polystylistic’.  Working, as he did, in the post-Shostakovich era, he took the obvious irony of much of Shostakovich’s work, and scrambled it up with many of the influences that the giant of Soviet music had employed until his death in 1975.  There was Mahler of course, but also spare Baroque and Renaissance borrowings, rubbing shoulders with electric guitars and waltzes from old Vienna.  In the hands of a lesser talent it could have been a train-wreck.  In Schnittke’s hands from chaos, emerges a terrible beauty.  Here, the last few pages of the Concerto Grosso No 5 for Violin, Piano(Hidden behind the stage and amplified), and a huge orchestra containing harp, harpsichord and celesta.  Tell me this sound is not magical?

If you seek order and balance in music, you are advised to give Schnittke a wide berth, and move back in time to his musical father Dimitri Shostakovich who, along with Prokofiev perhaps, was the only Soviet composer with an indisputable claim to genius.

Physically a scrawny, pale, nervous, chain-smoking waif, his appearance concealed an iron will that served him well through multiple illnesses, and battles with Stalin’s bully-boys.  The two contrasting moods of most of his enormous output are, on the one hand an impish, satirical humour and, in stark contrast a bleak, inward-looking intensity.  The deep affection I have for this man and his music amounted to near-obsession when I was younger, and I can still remember vividly the excitement of getting my hands on the first recording of the A minor Violin Concerto by David Oistrakh and being completely mesmerized by it, a grip it still holds over me.  I was still in short-trousers when the almost neo-classical F major Piano Concerto appeared in 1957/8.  Here it was not the hustle and bustle of the obviously attractive outer movements that stabbed my vitals, but the quietude of the Mozartian andante that completely undid me, and still does.  The scoring for the opening strings is feather-light in the minor, and when the piano enters in the major, the effect is like throwing open curtains on a sunny morning – a wonderful movement, played here by the son (conducting) and grandson (playing) of this great master.

When Stalin removed himself from a performance at the Bolshoi of Shostakovich’s second opera Lady Macbeth of the Mtsensk District (later re-named Katerina Ismailova), the writing on the wall became very clear, and few hours later when Pravda published their now famous diatribe ‘Muddle Instead of Music’, the composer came as close as he ever did to a journey into the frozen wastes.  He was already working on his vast Mahlerian Symphony No 4 in C minor, and it must have been clear to him that the wild nature of the symphony would be an inadequate response to the attack in Pravda.  It was quickly withdrawn, and didn’t see the light of day for another 25 years.  And reading the Memoirs of Shostakovich in Testimony  related to Solomon Volkov (published in 1979 and since, rather discredited), it is clear that the young composer feared for his life at this time.  For what it is worth I believe this symphony to be his finest, and it was with great good fortune that I stumbled upon this short video of the spooky conclusion to the work, played in what looks (from the hair-cuts) like the era of ‘flower-power’, at a Promenade concert, and conducted by the composer’s close friend Gennady Rozhdestvensky, who gave the first performance in the West at the Edinburgh Festival in 1962.  Like most of the very greatest communicators, this conductor does very little and, before the end, seems to be almost at prayer – as well he might be after the hour of anguish he has just re-created.

2 thoughts on “Under the Soviet Yoke”