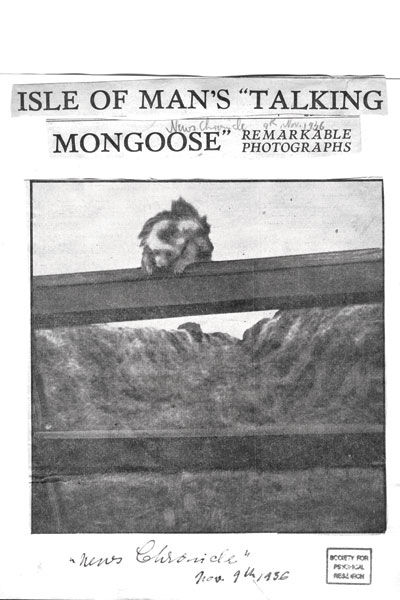 Nige discovers something rather strange of the Isle of Man…

So there I was, reading – for reasons that now escape me – the Wikipedia entry on the defunct BBC magazine The Listener, when I stumbled on something that made me rub my eyes in disbelief. I quote:

The first editor, Richard S. Lambert, left in 1939 after successfully suing Sir Cecil Levita for slander over allegations that he was unfit for his job because of his credulity in believing in Gef, the talking mongoose.

Gef, the taking mongoose? Some kind of Wiki joke surely… But no. Gef was, in his day, something of a celebrity, a very well known talking mongoose indeed (though there was some debate over whether or not he was technically a mongoose – he didn’t seem too sure himself). Gef – about whom Lambert had indeed co-authored a book with his ghost hunter pal Harry Price – lived with a family called the Irvings in a farmhouse known as Cashen’s Gap near the hamlet of Dalby on the Isle of Man.

The Irvings first became aware of his presence when they started hearing mysterious sounds as of a rat scratching, or a ferret spitting, or a dog growling, or a baby gurgling. Gef (pronounced Jeff) soon resolved the mystery by announcing himself as a mongoose, born in New Delhi in 1852 – in his own words, ‘an extra extra clever mongoose’. He was, according to the only member of the family to get a proper look at him, about the size of a small rat, with yellowish fur and a large bushy tail. But Gef himself declared ‘I am a freak. I have hands and I have feet, and if you saw me you’d faint, you’d be petrified, mummified, turned into stone or a pillar of salt!’

Gef liked to joke around with the Irvings – once taking it too far by pretending to be poisoned. He obligingly spied on the neighbours and reported back, and made himself useful about the house. The Irvings rewarded him with biscuits, chocolates and bananas, served up on a saucer suspended from the ceiling. The friendly mongoose even joined the family on their trips to market, chattering away merrily from the far side of the hedgerows.

Unsurprisingly, the story of Gef attracted the attention of the press and of psychic investigators, who flocked to the island. No very firm conclusions were reached as to what exactly Gef was, and his fame faded with the coming of the war. When the Irvings had to sell the farm in 1945, they found that Gef had somewhat depressed its market value. The farmer to whom they eventually sold was an unsentimental soul who claimed to have shot Gef, but the body he displayed was black and white and nothing like a mongoose.

I should add that I had a distant female relative living on the Isle of Man around this time who used to have all her housework done, when she was out, by the helpful ‘little people’ in return for milk and the odd titbit. I rather fancy the Isle of Man is that kind of place. Or was.

5 thoughts on “Gef the Talking Mongoose”