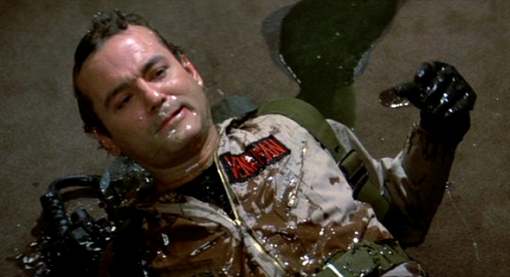 Frank reveals the history of the mysterious ghostly goo…

During the heyday of spiritualism in the late nineteenth and early twentieth centuries, the dead chose somewhat curious ways of communicating with the living. Through their mediums, they rapped on tables, shifted or levitated furniture, caused sudden drops in room temperature, played unearthly music, produced bunches of flowers from nowhere, and manifested themselves in various other ways, almost exclusively in very dimly-lit rooms.

That the spirits of the departed seemed unwilling or unable to reveal their presence more directly led many to dismiss the whole business as a charade, the mediums as tricksters and charlatans. The dead therefore devised a way of making their presence physically apparent. The psychic energy by which they communicated with mediums took on definite physical form, as ectoplasm.

Ectoplasm was described as “sometimes vaporous, sometimes a plastic paste, sometimes a bundle of fine threads, or a membrane with swellings or fringes, or a fine fabric-like tissue”. Generally, it was white, faintly luminous, and gooey. Sir Arthur Conan Doyle noted that it “appeared to differ from every known form of matter in that it could solidify and be used for material purposes”. Clearly, it was not of this earth, and must originate from the realms beyond.

The increasing production of ectoplasm at séances ought to have shut up the doubters and the skeptics. Unfortunately, however, certain scalliwags learned how to make their own ectoplasm. The American medium Mina Crandon (1888 – 1941), known as “Margery”, used the lung tissue of various unidentified animals. The shameless Hungarian rogue Laszlo Laszlo (1898 – 1936), whose career as a medium was bookended by periods as a bank robber, gave an account of his own methods:

At first I used gauze which I soaked in water and then immersed in oil for several days. Later I ran out of oil and started to use goose-fat instead . . . I used to take the piece of gauze or cotton-wool from my accustomed hiding-place and put it in my mouth. Then the curtain was drawn apart and they could all see the ‘mysterious ectoplasm’ hanging from my lips. No one ever dared touch it because Schrenck-Notzing had warned about this in his book, saying that it might cause the death of the medium. In any case, I accompanied it with such horrible noises that the sitters all shook in terror. . . After each séance I hid the greasy cotton-wool in my pocket and then threw it into the river on my way home.

It might be thought, then, that all ectoplasm was produced by similar subterfuge. Luckily, we have the incontrovertible photographic evidence of the British medium Minnie Harrison. Minnie, from Middlesbrough, had this snap taken in 1948 [below]. It shows

ectoplasm emanating from the Medium’s mouth. Taken in complete darkness using Kodak infra-red plate. Exposure by means of powerful ‘Sashalight’ bulb through ‘Wratten’ glass filter – extremely deep ruby-red colour. The Ectoplasm is emanating from her mouth and in this form it is quite transparent, very similar in appearance and texture to chiffon.

Those of you who think Minnie is sitting there with a net curtain stuffed in her mouth are sadly deluded. What you can actually see is a spirit from the Other Side making its eldritch presence manifest in a Middlesbrough sitting room. 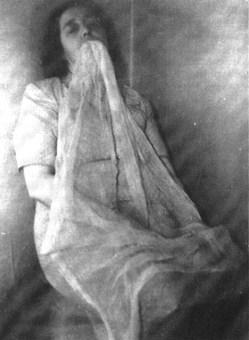