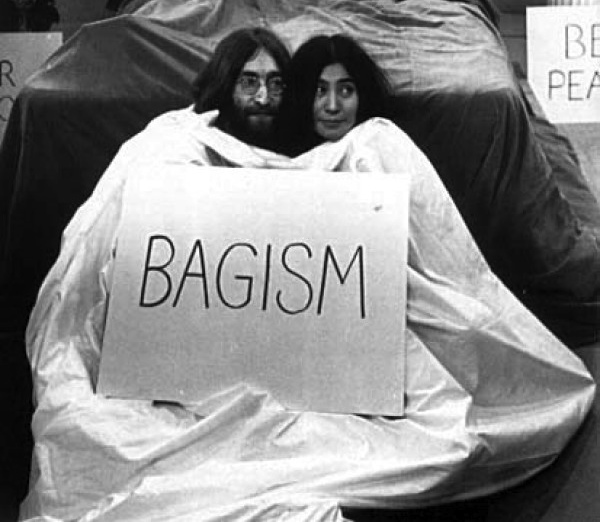 This was one of John Lennon’s pranks that had passed me by; sounds like the sort of thing that Russell Brand would like. Today’s Wikiworm uncovers an early example of studenty idealism…

Bagism is a term which was created by John Lennon and Yoko Ono as part of their peace campaign of the late 1960s. The intent of bagism was to satirize prejudice and stereotyping. John and Yoko introduced the idea during a well-received press conference in Vienna on March 31, 1969, and explained it more thoroughly in a June 14, 1969 interview with David Frost. Bagism involved literally wearing a bag over one’s entire body. According to John and Yoko, by living in a bag, a person could not be judged by others on the basis of skin color, gender, hair length, attire, age, or any other such attributes. It was presented as a form of total communication. Instead of focusing on outward appearance, the listener would hear only the bagist’s message.

By catching the attention of the masses with its outlandish premise, bagism presented a powerful social and political message to the world. As Lennon stated, “Yoko and I are quite willing to be the world’s clowns; if by doing it we do some good.”

The couple had earlier appeared in a bag, at The Alchemical Wedding, an underground artists’ gathering, at London’s Royal Albert Hall in late 1968, which sought to challenge audiences to be participants rather than passive consumers. John and Yoko climbed into a large, black velvet bag on stage, sat cross-legged, knee-to-knee, hunkered down and closed the bag. They moved only twice in 45 minutes, hunkering further down. 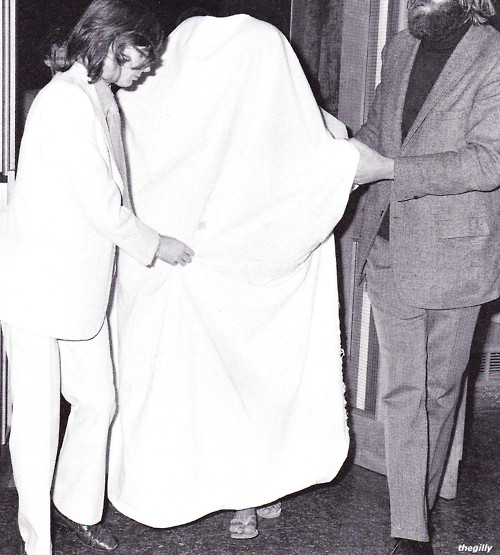 Lennon and Oko attending a screening of their films at the ICA, whilst both inside a bag

Yoko said that bagism was inspired by the theme of Antoine de Saint-Exupéry’s The Little Prince, which was “One sees rightly only with the heart, the essential is invisible to the eyes.” She hoped that the bag, by hiding her and John’s physical appearance, would make their essence or the essence of their message visible.

Bagism is mentioned three times in the songs of John Lennon. The first time is in “The Ballad of John and Yoko” where John refers to “eating chocolate cake in a bag”, (which occurred at the Vienna press conference), and the second is in the song “Come Together” where he sings “He bag production”. This is referring to Bag Productions Ltd, Lennon’s public relations company, which derived its name from Bagism. The third reference is in “Give Peace a Chance”, with the line, “Everybody’s talkin’ about Bagism, Shagism, dragism, Madism, Ragism, Tagism, This-ism, That-ism, ism, ism, ism.”

In 1996, a john Lennon fansite called Bagism.com was sent a cease and desist request from the representatives of John Lennon’s estate over the use of copyrighted John Lennon content. After an unsuccessful appeal to Ono and the John Lennon Estate and the Dear Yoko petition campaign, the web site owner capitulated and instead focused his efforts on less legally-volatile content.