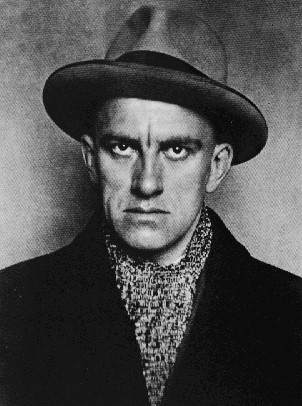 We mark the anniversary of the birth of Russian poet, Vladimir Mayakovsky, a great and, even now, much-loved writer in his homeland – even if he penned a fair bit of turgid, politicised rubbish.

This year, the poet Vladimir Mayakovsky would have turned 120 years old. Given that he was born in the Caucasus where longevity is not unusual, it’s almost feasible he could still have been among us, ancient, wizened, extolling the virtues of Borjomi mineral water and regular exercise.

But it was not to be. Mayakovsky shot himself in 1930 aged 36, and was immediately co-opted by the Stalinist regime. A big bronze monument was erected on Triumfalnaya Ploshchad in Moscow, a central metro station was named in honor of him and his desecrated mummy became one of the central pillars of official Soviet culture. Already dead, the poet was subjected to a second death, his verses conscripted to serve “the most gigantic lying mouth of all time.”

And yet, Mayakovsky is still held in high esteem. A recent poll revealed that he is Russia’s second favorite 20th-century poet, after Sergei Yesenin, who also killed himself. Polls usually reflect only what people were forced to study at school, but in the case of Mayakovsky, there is genuine passion among his followers: The Moscow News reports that a bitter conflict has erupted over plans to renovate his extraordinary museum in Moscow.

I understand that passion. I would place Mayakovsky far above Yesenin, whose sentimental verse never did much for me. In fact, it was the museum that turned me on to Mayakovsky, before I had even read his work. It is a radical place, with sloping floors, wild colors, poetry trapped in cages, a giant bed sinking into the ground like a ship struck by an iceberg and little old ladies with pink and purple hair who want nothing more than to share their love for this avant-garde poet with strangers. Indeed, it’s the best writer’s museum I’ve ever been to, a creative interpretation of the rhythms, the concepts and the incredible dynamism of his life and poetry.

Since that first visit, I have spent years grappling with his poetry in Russian while also searching for a tolerable English translation to make life easier. For a while I made do with a British collection from the 1960s, but Mayakovsky is a poet who works better in the American idiom: bolder, more direct, more colloquial – more modern. He once started a poem with the line: “I love to watch children dying.” Any truly effective approach must therefore incorporate vulgarity, and an impulse to shock and startle that comes more easily to Americans than to British literary translators who grew up steeped in Shakespeare and Dryden.

Last year I picked up an acceptable American collection titled “Night Wraps the Sky.” If you’re reading this in an English-speaking country, then you can probably get it for a couple of bucks online as I don’t think it sold very well. I like it for the crackling energy of the translations, the sharpness of the imagery – even though I suspect the translations err on the loose side. But I had a problem with that book too. You see, it concentrated almost entirely on Mayakovsky’s good stuff. And this is to falsify his record, for Mayakovsky also composed a lot of turgid rubbish. He churned out commercial jingles and crude propaganda slogans, and composed an ode to Lenin, and another to his Soviet passport, as he struggled to refashion himself from a wild bohemian into a dutiful Marxist drudge. His politics were disastrous.

This rotten material is important. Viewed in context, it exposes the unbearable struggle taking place inside Mayakovsky as he fought to adapt to a time that had no place for him. The straining for effect, the leaden weight of political correctness – all of that is tangible in his later poetry. It cheapened his work and ate at his soul, and he was acutely aware of what was happening to him. Mayakovsky’s slow creative death is a more extreme version of a struggle we see in the arts every day, of the hit Hollywood director or the popular musician sucked into the machine. In Mayakovsky, though, the fight took on a Jacob-and-the-Angel-like quality, and his failures are also revealing.

My fascination with Mayakovsky even led me to put his poster on my wall, a reproduction of the famous Rodchenko portrait of him: sedentary yet somehow poised for action, an incredible energy burning in his eyes. As I wrote my first book, I’d regularly look up and think: “Yeah, man, you showed them – you were totally uncompromising.”

Except that he did compromise. And then he shot himself. So I took the poster down. But I still think he was a great poet: impertinent, rash, bold, wild and capable of combining words and images in a way unlike anybody before or since. As Stalin put it: “Mayakovsky was and remains the best and most talented poet of our Soviet era.”

He was being completely insincere, of course, but I’m not: Viva Mayakovsky!