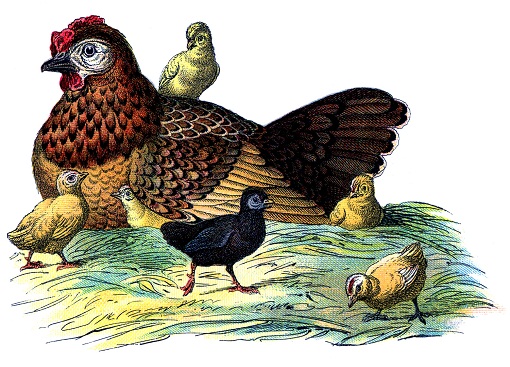 Hen: descendant of that which laid golden eggs?

With the free press currently under threat from Leveson and Hacked Off, it’s worth reminding ourselves of the proud history of British newspapers in fearlessly bringing us the important stories of the day…

My friend Peter was browsing through the papers the other day and felt compelled to bring some of the headlines to my attention. It so happened that the papers he was poring over were copies of The Times from 1789 and 1790. (Incidentally, Peter is the author of The Curious Cookbook, which every single one of you ought to buy, immediately – it’s a hoot!) Here, then, are the top stories from this side of the Channel at a time when the French were engaged in that kerfuffle of theirs:

Irish people not yet refined enough for opera – 19th June 1789

Death and Burial : Peruke maker shouts for another drink just before coffin is nailed up – 27th June 1789

Poultry : Hen supposed to be descendant of that which laid golden eggs – 1st December 1789

Norfolk Island Settlement : Lack of candles forces islanders to go to bed as soon as it is dark – 16th January 1790

Over-hurried blind bullock enters artists’ colour shop on Holborn Bridge after missing way; does considerable damage before returning to the street through the window; then goads windows at watchmaker’s shop, catches string of watches on its horns and disperses them among mob in street. – 13th October 1790

Poor man kills himself with drinking in a northern borough; vestry clerk suggests that master of the workhouse should let rest of poor out to kill themselves and ease parish of them. – 6th July 1790

Gentleman who offered twopence as reward for saving lady from drowning defends seeming want of generosity by declaring lady is wife. – 23rd August 1790

3 thoughts on “Times Past”