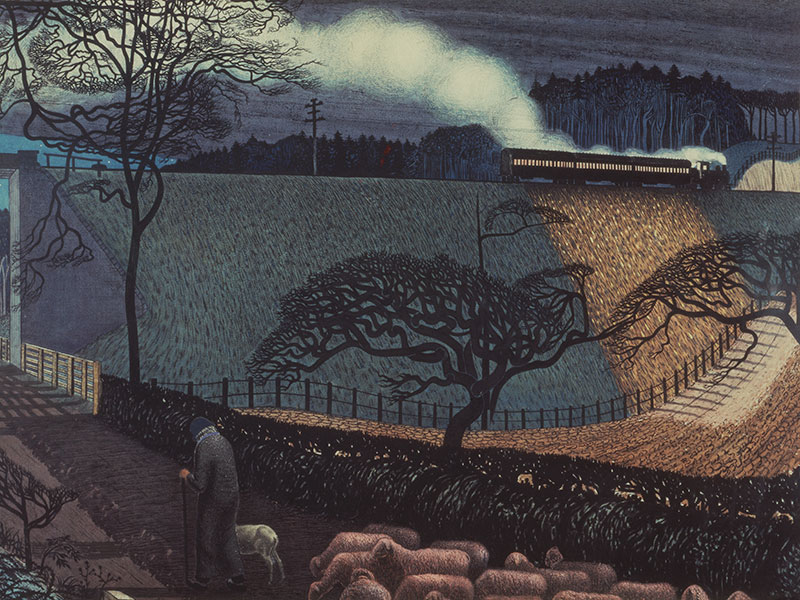 It is a commonplace that travelling by train is more conducive to observation and to contemplation than travelling by, say, car or airplane. Not surprisingly, therefore, a great store of poetry exists that has its origins in someone gazing out of the window of a train at the passing world, or in someone sizing up his or her fellow passengers (which may, in the end, lead to a sizing up of himself or herself).

She is the passenger with restless eyes
Who twists the ticket in her black-gloved fingers.
None knows what calculation, what surmise
Disturb her as the train jerks on or lingers.
Above the eyes her brow is smooth and yellow.
‘I grant,’ her silence says, ‘that all I planned
Has been like something graven in the sand,
But tell me how your schemes work out, my fellow.’

I can easily picture Louis MacNeice — that urbane and questioning figure — deep in thought in a smoke-filled train.  Perhaps he is on his way to Holyhead to catch a boat to Ireland.  (In fact, R. S. Thomas has written about encountering W. B. Yeats on that route:  “Memories of Yeats Whilst Travelling to Holyhead.”)  Or perhaps he is headed to western Scotland and the Hebrides.  And, sure enough, MacNeice did write his share of train poems, among them “Corner Seat,” “Train to Dublin,” and “Trains in the Distance.”  I think that this is my favorite.

Forty-two years ago (to me if to no one else
The number is of some interest) it was a brilliant starry night
And the westward train was empty and had no corridors
So darting from side to side I could catch the unwonted sight
Of those almost intolerably bright
Holes, punched in the sky, which excited me partly because
Of their Latin names and partly because I had read in the textbooks
How very far off they were, it seemed their light
Had left them (some at least) long years before I was.

And this remembering now I mark that what
Light was leaving some of them at least then,
Forty-two years ago, will never arrive
In time for me to catch it, which light when
It does get here may find that there is not
Anyone left alive
To run from side to side in a late night train
Admiring it and adding noughts in vain.

Given the circumstances of its composition, “Star-gazer” inevitably has a bitter-sweet air about it.  MacNeice wrote it in January of 1963.  He died unexpectedly of pneumonia in September of that year, just short of his 56th birthday.

I hold romantic notions about the sound of distant trains in the countryside at night.  Perhaps this is due to the fact that I am a city dweller.  Or perhaps it has something to do with country music — Emmylou Harris singing “Tulsa Queen,” for instance.

Siegfried Sassoon wrote the following poem near the beginning of the Second World War:

A Local Train of Thought

Alone, in silence, at a certain time of night,
Listening, and looking up from what I’m trying to write,
I hear a local train along the Valley.  And “There
Goes the one-fifty,” think I to myself; aware
That somehow its habitual travelling comforts me,
Making my world seem safer, homelier, sure to be
The same to-morrow; and the same, one hopes, next year.
“There’s peacetime in that train.”  One hears it disappear
With needless warning whistle and rail-resounding wheels.
“That train’s quite like an old familiar friend,” one feels.

8 thoughts on “Trains in the Night”