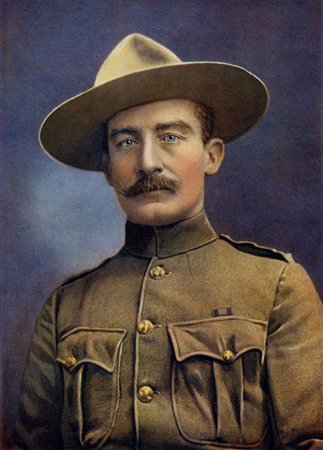 Atholl Oakley, Sir Edward (British wrestler, writer, and organiser of “rugged holiday cruises”, 1900 – 1987). To build up his physique, Atholl Oakley followed a regimen devised by the giant wrestler Hackenschmitt, which involved drinking eleven pints of milk every day. Many years later, Hackenschmitt told him that the quantity of milk prescribed was “a misprint”.

Baden-Powell, Robert (British scoutmaster, 1857 – 1941). Baden-Powell’s favoured method of crossing the road was to stride forth, looking to neither left nor right, sure in the conviction that the “foot slogger” had as much right to the king’s highway as any motorist. If, as a result, he “gets it in the back”, he dies asserting his right. That is not “blank foolishness”. “That’s British.”

Borges, Jorge Luis (Argentinian writer, 1899 – 1986). In 1946, Borges was appointed to the post of Chief Poultry Inspector for the Buenos Aires municipal market. He resigned immediately.

Chamberlain, Neville (British politician and Prime Minister, 1869 – 1940). In 1916, Lloyd George appointed Chamberlain as the Minister for National Service. He sacked him a few months later, having taken a dislike to Chamberlain because “he had the wrong-shaped head”.

Maxwell-Lefroy, Harold (British entomologist and founder of Rentokil, 1877 – 1925). Maxwell-Lefroy choked to death on a gas insecticide of his own invention. His last words were “the little beggars got the best of me this time!”

Newton, Sir Isaac (British physicist and mathematician, 1642 – 1727). In 1689, Newton was elected Member of Parliament for Cambridge University. He held the post for one year, during which time he spoke only once – asking someone to close the windows, as he could feel a cold draught.

Taylor, Joseph (British writer, 1761 or 1762 – 1844). Taylor was the author of Apparitions or, The Mystery of Ghosts, Hobgoblins, and Haunted Houses Developed. Being A Collection Of Entertaining Stories, Founded On Fact, And Selected For The Purpose Of Eradicating Those Fears, Which The Ignorant, The Weak, And The Superstitious, Are But Too Apt To Encourage, For Want Of Properly Examining Into The Causes Of Such Absurd Impositions (1815), wherein he observed, inter alia, that “idiots in general are remarkably fond of any thing relative to a funeral procession”.

Wilson, Harold (British politician and Prime Minister, 1916 – 1995). In his own words: “I see myself as a big fat spider in the corner of the room. Sometimes I speak when I’m asleep. I might tell you to go to the Charing Cross Road and kick a blind man standing on the corner. That blind man may tell you something, lead you somewhere.”

4 thoughts on “Some More Brief Lives”