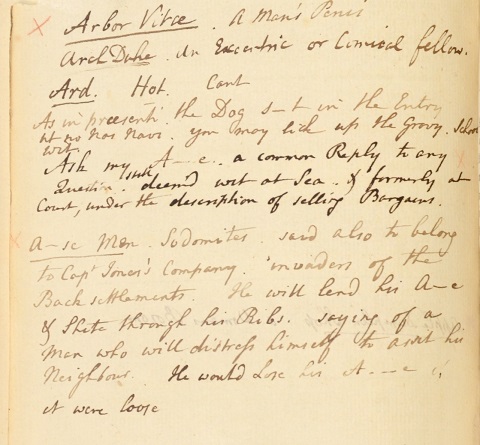 It’s holiday time, and Mr Slang is spending his summer constructing interactive timelines of popular terms for the penis. You ain’t seen nothing like this before…

It’s August. Holiday time, I gather. I had mine in June but no matter. My short-lived tan has faded and my mind is blank. Slang languishes and words fall silent. Nothing to review. (Well, there’s Patrick Hanks’ Lexical Analysis: Norms and Exploitations which is fascinating and ought to revolutionize all sorts of things linguistic, but if you think I could actually review it…just reading it was seriously demanding. I shall not even consider claiming the word ‘understanding’.)  I have also purchased Captain Francis Grose’s own edition of his 1785 Classical Dictionary of the Vulgar Tongue. (As for the price I can only say that my wife told me that it had, as it were, my name on it, and we talk of it as ‘an investment’). This glorious artifact – a tangible link between myself and one of my most illustrious predecessors – is not merely the dictionary itself, which he amended in manuscript, but includes many extra pages which have been interleaved and on which are found Grose’s own notes and amendments, all of which would go towards the text of the second edition that would appear in 1788. Or not quite all: there is, for instance, a manuscript entry ‘a-se-man: sodomites […] invaders of the back settlements’ which Grose, uncharacteristically prudish, seems to have decided to exclude from future print. There are more of the kind but I have yet to note them down: I am still circling the book, extracting it cautiously from its box, patting it occasionally, opening this page or that, glorying in the one thing I possess that is truly, unarguably, unique.

In addition I have been loaned a pile of books featuring a variety of once potent cops and criminals (whether ghosted or via the memoir of some trench-coated ‘Man Who Knows’ from Fleet Street), all long gone, all of which I must gut in the hope of finding as yet uncharted slang. Among them, the prize volume being ‘On the Beat with P.C. 49, a figure – admittedly fictional – whose command of what he terms ‘the Lawless Language’ never came across in his Eagle days. I am impressed. His colleague Dixon of Dock Green, as I recall, was far less well versed; the phrase ‘bad apple’ being about as metaphorical as he could manage. On the other hand, as a pre-requisite of the role he was to play on TV, Dixon had risen from the dead (a resurrection that took place not three days but five years later), having been shot down by Dirk Bogarde at the end of The Blue Lamp. P.C. 49 showed no such signs of messiah-dom, even surrogate.

But that, literally, is for tomorrow. What I have also been doing, which doing seems imperceptibly but quite unassailably to have taken over the last few days and is due to dominate many more, is the assemblage of timelines. Slang timelines. In other words the listing, via visual presentation, of the entire vocabularies of various popular slang themes. As thing stand these include drinks, drinking, pubs, the penis and, an on-going construction, the vagina. There will be many more to come, and you can work them out: I have, I am sure, already listed slang’s thematic taxonomy too often.

The OED has of course been offering timelines for a while, but they are nugatory things, focusing only on the chronology of a single word. I am looking for something wider-ranging and thus more substantial.

Here is an example: 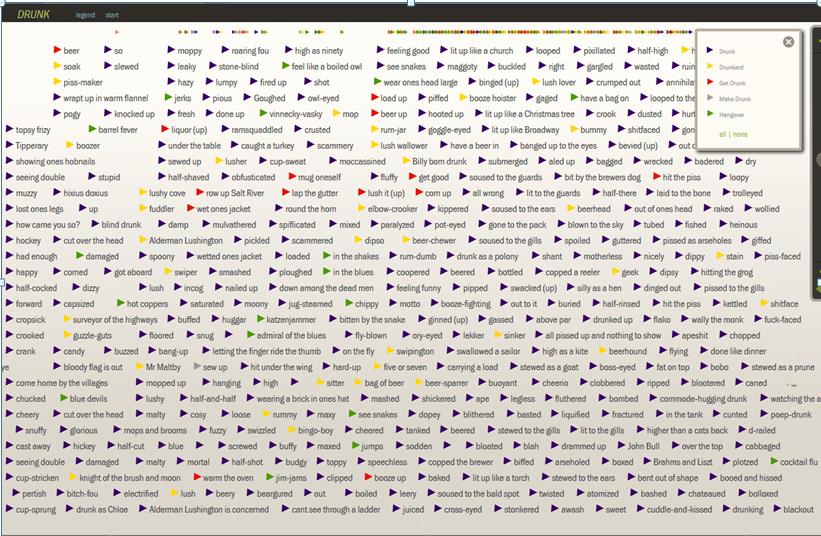 It is a very squashed example of a subset of terms listed under the general rubric of ‘drunk’ and attenuated because I used it as a slide in a recent lecture. The different colours denote ‘drunk’, ‘drunkard’, ‘get drunk’, ‘make drunk’ and ‘hangover’ (there is a legend at top right). The real thing (the real timeline that is) can be displayed with far greater clarity and has the year included at the bottom, thus identifying just what turned up when. It is not foolproof – there are artificial clusters that occur because certain dictionaries have appeared and, despite my best efforts, have listed terms that have hitherto not been noted in print – but it gives a good flavour.

When each one loads, you need to zoom out (using the slider on the right) to get a focus on the mass of words, then start playing around from there.

5 thoughts on “Time for a Line”