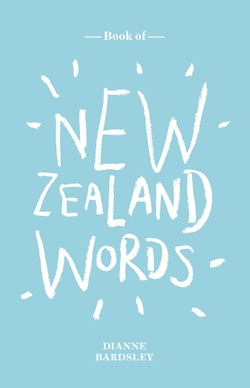 Anyone fancy a ‘curry te Kanawa’? Mr Slang enjoys a new lexicography of New Zealand words, even though it is a little clean for his tastes…

Once upon a time there was the dictionary. It survives, of course, but not as we knew it, and those thick and squarish books are henceforth damned: print being in fast decline, and especially so in the world of reference. No matter, they serve well for holding mis-aligned tables; the OED, properly arranged, can even provide a table of itself. Fortunately, for those who find the primary constituent of the cloud being its insubstantial vapouring, there remain more expertly conceived products. They are smaller, and must sacrifice some of lexicography’s givens (your publicity dept. will term this ‘accessibility’), and they are harder to come by, but when they do, we should be grateful. Such a book is Dr Diane Bardsley’s Book of New Zealand Words (Te Papa Press).

Dr Bardsley was former head of the New Zealand Dictionary Centre and as such inheritor of Harry Orsman’s Oxford-backed New Zealand Dictionary (1997) before in 2012 it was adjudged one of those beans that having been counted back at Great Clarendon Street, was deemed fit only for the bin. It is a relief to see that she remains undaunted and that her work continues.

New Zealand English, being one of those created by white colonial settlers, ranks among what lexicographers term ‘inner circle’ Englishes (outer circle varieties include that of India or Singapore; beyond that lie those countries such as China where English, while not a first language, is increasingly important as a convenient lingua franca). Formerly lumped with that of Australia and thus billed as ‘Australasian’ it is now, as epitomized in the DNZE, acknowledged as something discrete. And like all such Englishes offers localisms, words emerging from the national topography, flora (ponga, a tree fern, the poor man’s orange, a grapefruit) and fauna (Captain Cooker, a wild pig and katipo, a venomous spider) and occupations (notably sheep-farming: which offers 150-plus names for sheep or dogs, among them the less than sympathetic crawler, an old sheep with footrot; the small farmer Australia’s cockatoo, is a ground parrot; the fart tax, a proposal to capitalize upon if not limit animal flatulence, seems to have been rejected), as well as indigenous slang (though it here that there is the greatest overlap with that other country known as Down Under). Local dishes are featured (the station brownie, a form of cake embellished with chocolate and the station stew, a synonym for the olla podrida elsewhere known as hashmagandy; unless I’ve missed it, however, there  is no entry for station tout court, defined as a ‘large grazing property’ in DNZE and good for five columns of compounds), and rugby, the national game, is prolific (e.g. the Ponsonby handshake or Canterbury coathanger, both a punch in the face or throat). It also, and of course uniquely, has absorbed many words and phrases adopted from te reo Maori: the Maori language. It is these last above all, as the author notes, that make New Zealand variety of what originated back in the Old Dart so unique.

This is not, exactly, a conventional dictionary. It lacks – Dr Bardsley explains that the constraints of space and the necessary expenditure of research time has made it impossible – any detailed etymologies. It contains a good leavening of encyclopedic entries. One would not normally encounter a phrase such as baubles of office, which refers specifically to an event during the 2005 election, GRI (guaranteed retirement income) which sounds like tax office jargon, or railway workshops which means, in Enzed as elsewhere, just what it says. Still there is, in the cases of certain nicknames (typically of politicians or sports people) and of terms sparked by historical events, plenty of background information, albeit not linguistic. It is – or is it simply that I am so innately sullied – a very ‘clean’ book. This may have been inspired by a degree of national pride: the publisher is an arm of the Museum of New Zealand –  but then again it is in no way a slang dictionary, even if it contains a variety of examples. Thus Dr Bardsley has chosen to overlook slang’s take on Maori, a selection of predictably negative compounds implying stupidity or laziness and which include Maori P.T., loafing, a Maori roast, fast food or Maori foreplay, the absence thereof. However there is still fun to be had and my personal favourite (setting aside the punning delicacy curry te Kanawa – challenging, albeit belatedly, Australia’s peach Melba), and reflective no doubt of the mindset of the Kiwi bloke (‘regarded,’ as Dr Bardsley puts it in one of her consistently astute and witty definitions, ‘as a retrosexual rather than a metrosexual’) being career girl: a ewe who refuses to mother her lamb.

My own database offers around 1600 words identified as ‘N.Z.’, although some 1000 of these seem to have crossed the Tasman Sea (known like other large expanses of water as the Ditch) and are equally available in Australia. This is not only true of slang, nor is the direction of travel easy to prove: as Dr Bardsley points out, the lexicographers of each country continue to tussle over which population can claim first use for a given term. For instance New Zealand currently edges the (glorying? ironic?) self-attribution of God’s Own Country, first recorded in 1906, whereas Australia holds off until 1908. But research remains fluid and for this and many others the laurels remain contested: the searchable newspaper databases – Papers Past for New Zealand, Trove for Australia – both admirably provided via governmental funding,  will doubtless continue to yield answers.

The conventional dictionary does not require an index – it is arranged, after all, in alphabetical order – but a dictionary based as is this on the tropes of a specific nation, does. I would like, and surely so would other users, the opportunity to have lists, to take a few examples, of terms for farmers, birds and animals, political and other institutions, food and drink, trees, fruit and veg, sports, sheep and their shearers and quite simply slang. The absence is perhaps deliberate? Certainly New Zealand Words thus gives endless opportunities for one of any good dictionary’s often overlooked functions: serendipitous wandering among the pages. It also tells a story: that of the country whose words it hymns.  That the story is inevitably a paraphrase does not matter: the interested reader is constantly drawn to hunting down background information and today such hunts are almost invariably successful.