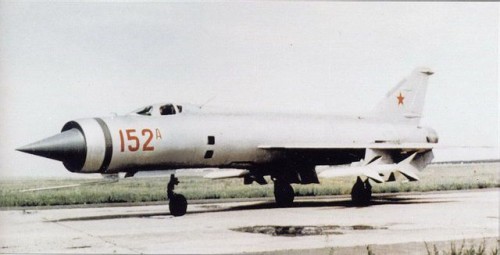 More compelling machines (previous ones in the series are here). Today Scott Locklin digs up some Cold War flying dinosaurs. Are they the most fascinating mechanical objects ever built?

The Soviets solved problems differently from the West. This wasn’t just because they had different problems to solve, though there is that. Part of the reason their artifacts are so weird to Western eyes is their engineering and scientific disciplines evolved under different pressures.

Consider the Soviet long range interceptors. Westerners mostly didn’t consider the interceptor to be an important combat role. The Soviet Union had vast territory, widely distributed population, and was surrounded by hostile neighbors with advanced long range bomber technology. Western nations were much smaller, with population centers less widely distributed. Western nations also only had to worry about attacks from one or two hostile nations, mostly far away. Soviets had to worry about attacks from Turkey, Japan, West Germany, France, China, Canada and Britain; they were surrounded. Soviet long range bombers were also not very effective compared to the Western ones. Soviet reconnaissance aircraft were also nowhere near as good as Western ones, and almost never left Soviet borders, where Western reconnaissance aircraft routinely penetrated Soviet borders. As such, point interceptors, such as the superb English Electric Lightning sufficed for defense against bombers for the West. There were a few aborted attempts at long range, high speed interceptors in the West; the Avro Arrow, the XF-108 Rapier, and proposed SR.187. Since no credible long-range, high speed Soviet bomber threat emerged, and missiles made this kind of attack of secondary concern, they didn’t bother going to production with these.

The Soviets, though, they had serious problems requiring effective interceptors. They also had credible future threats, like the TSR-2 and the XB-70 Valkyrie. As such, they needed fast, long range interceptors. Interception was so important, the Soviets had a whole, independent air force, the PVO-Strany, whose job it was to do nothing other than defend the airspace of Mother Russia. This wasn’t a mere bureaucratic distinction like SAC or NORAD: the PVO-Strany had their own radar installations, their own schools, and their own chain of command. They even have their own holiday; April 11 if you care to toast their brave pilots with some wodka on that day. Because the bureaucracy which developed the interceptor forces was separate from other air forces commands, and was considered of the highest importance (the memories of Stalingrad were not very old), they had very specific priorities which needed to be met by aircraft design bureaus. In Western nations, it was generally accepted that aircraft designs should fulfill more general roles.

The early generations of these Soviet interceptors which had to fulfill these design goals are some of the most fascinating mechanical objects ever built. Their secrets were jealously guarded: they were never offered for export, and as a result, we still know little about them today. They were designed to intercept fast moving, high flying planes. They were not designed as dogfighters, unlike the Soviet general purpose fighters: they were meant to be controlled from a central command, move quickly, shoot their missiles, and return to base. Speed, climb rate, endurance and the ability to carry heavy, bomber destroying missiles were what was necessary. It was the supersonic aircraft equivalent of a top fuel dragster. 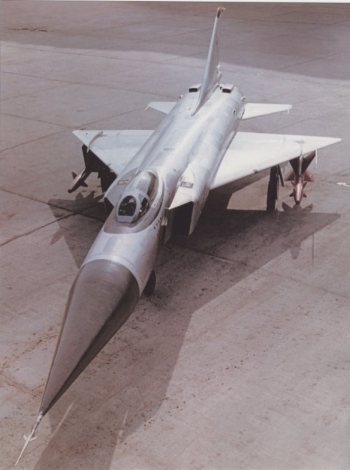 The Su-15 Flagon was one of the most successful Soviet heavy interceptors, and exemplifies the idea the PVO-Strany was trying to bring to fruition. It was big: 64 feet long, and 38,000lbs; about the same size as the F-105 Thunderchief fighter-bomber. It was fast: Mach 2.5. It had long legs, with a 900 mile combat radius at 60,000 feet. It used two Mig-21 motors, and, due to its little delta wing had a preposterously hot take off and landing speed: as high as 280mph in the early pure delta model shown above. It had a simple, but powerful radar system, designed to overwhelm ECM defenses by burning through them. Its arms were giant R-8 missiles, designed to take out large bombers. They also worked well on 747s. The Su-15 was effective against high flying targets, and almost 1300 of them patrolled the skies from its 1967 deployment until the 90s. The Russians allegedly still keep some of these mothballed in case they are needed in a time of crisis.

The Tu-128 was the heaviest fighter ever built, tipping the scales at a preposterous 88,000 pounds. By contrast, the B-58 Hustler only weighed 68,000 pounds, fully loaded with nukes. The size of the Tu-128 was no accident: it evolved from a failed supersonic bomber design. It used even more preposterously large missiles as its armament; the R-4. It wasn’t as common or successful as the Su-15, and it was slower and had a lower climb rate and ceiling, but it had its niche in Soviet air defense. Because of its enormous size it had a longer range; 1600 miles. This made it particularly well suited to long patrol missions in the unpopulated North and East; it was able to loiter for hours at potential target areas. It wasn’t as dependent on ground control as the Su-15 was, as it had powerful radar of its own (legend has it, it would kill rabbits by the runway), and it was often used in concert with Soviet AWACS aircraft. 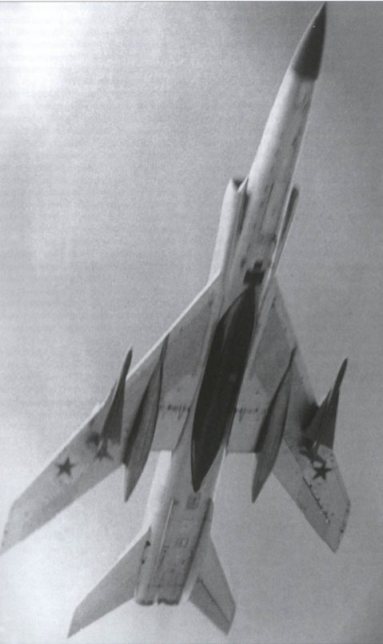 Prototype Tu-128 fiddler: the bomb-looking fairing is for test equipment

The Ye-150/2 series was never actually deployed, but it is my favorite of the Soviet heavy interceptors. The Mig-25 Foxbat was its eventual, much different looking offspring, also developed by the Mikoyan design bureau (they used “Ye” designation for prototypes, meaning yedinitsa or “single unit”). It was a sort of fat stainless steel version of a Mig-21; a metal cylinder with delta wings. Early versions made it to Mach 2.9, and climbed to an absurd service ceiling of 76,000 feet. This was higher than the service ceiling of the U-2, and it was in testing before the Gary Powers incident. The service ceiling for the F-15 is only 60,000 feet. The Ye-150 could allegedly hit 50,000 feet in two and a half minutes. The English Electric lightning was considered one of the fastest climbers around, and it could only hit 40,000 feet in three minutes. Due to its stout tubular construction, there was also room for up to 15,000 pounds of fuel; the range was an impressive 1000 miles. The performance of this aircraft was off the hook; the fastest manned single engine jet which ever flew. And it flew in 1959. The A-12/SR-71 didn’t fly at all until 1962, and it took until 1963 to beat the performance of the Ye-152.

It’s worth explaining why the Ye-152 wasn’t developed into production. It was an amazing aircraft with a lot of potential, and the long careers of the Su-15 and Tu-128 indicated there was a need for such a beast. The problems were two fold. The early Tumansky R-15 engines it was designed around were flakey. While they eventually worked the bugs out and built the Mig-25 around two of these, they were not yet reliable in 1959. These engines were originally disposable cruise missile engines (later deployed as a very cool supersonic drone). Their early lifespan reflected this. While they eventually worked the bugs out of the engine, the early prototypes delivered to the Ye-152 project were pretty bad. So bad, some early versions were, like the Su-15, powered with two Mig-21 Tumansky R-11′s. 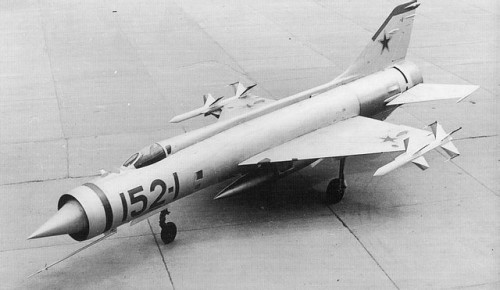 Ye-152-1: the wingtip mounted missiles were a failure, but this craft set speed and altitude records

The other reason for the project failure was more pedestrian. It was designed around the Urugan-5 weapons system. This was a Soviet system meant to do something like what the SAGE/F-106 system did. The giant pointy shock cone on the Ye-152 was a radome for the Urugan-5B or Almaz fire control radars. The system had an integrated data link from the aircraft to ground control. It is hard to say if Urugan-5 would have ended up as complex as the SAGE system, because the project was canceled, and the resources reallocated to missiles. They did develop the Vozdoohk-1 system a few years later, which accomplished similar things using the Su-15, Mig-25 and Tu-128. 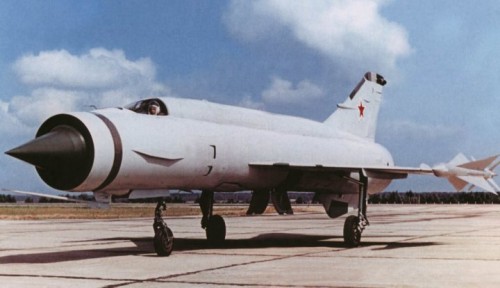 The thing looked fierce: the pointy ram intake/radome evokes images of the spiked helmet of a Prussian solder. The tiny, recessed cockpit of some versions makes it appear like some sinister subterranean carnivore from the front view. Over all the thing looks like a supersonic medieval mace; all straight lines and brutally sharp angles. The designers didn’t even bother with the “area rule” -they didn’t need to; it’s powerful engine punched through supersonic drag issues like a hatchet through dog shit. Unlike the swoopy-doopy SR-71 or Bristol 188 or Tsybin RSR, it is an undiluted incarnation of terrifying speed and electric death.

The PVO-Strany was probably ultimately focusing on the wrong problem. When the US moved away from high speed, high altitude bombers, and towards cruise missiles and insane rednecks flying bombing runs at tree-trimming altitudes, PVO-Strany did adapt, coming up with interceptors with “look down, shoot down” radar, and different mixtures of low altitude SAMs. The problem is, there is really not much wide-area defense one can do against low altitude attacks. This was proved dramatically when a wacky 18 year old Austrian with 50 hours of flying experience landed his Cessna in Red Square in 1987.

For all its failings, high altitude air defense was a noble idea, borne of the historical suffering of the Soviet Union. The devices they invented to defend Rodina Mat are some of the most astonishing objects ever built by the hands of men. They are the crystalization of the Promethean human spirit of the era; a vision of a glorious future of superhuman speed and the exploration of space. “Alas, burnished fighter … How that time has passed, Dark under night’s helm, as though it never had been!”