The terrifying and bewildering Noseybonk Saga originally ran on The Dabbler in 2010 and 2011, and followed a cast of characters including poet Grayson Ellis, revolting hack Rod Lidl, Ed Balls and Julian ‘mirror-licker’ Assange.

In this extract, Anglo-Swiss philosophe Alain de Botton attempts to blackmail Elton John, Art Garfunkel and other singer-songwriters, who have been plagiarising his tweets in order to create lyrics for Adult Contemporary songs…

Carrying the weight of his cranium, Anglo-Swiss philosophe Alain de Botton proceeds down Ladbroke Grove, glancing perceptively left and right and noting, in the composition of his interminable interior monologue, the pleasures and sadnesses in the souls of those humans such as them ones he sees going about the daily things what they do and all that.

Outside the Tudor Trust some lovers were parting, he muses in sagacious and beautifully-constructed prose. She must have been twenty-three, he a few years older, handsome, though perhaps over-showily hirsute and with an undersized cranium. Haruki Murakami’s Norwegian Wood was in her bag, I noticed importantly. They were dressed casually in combat trousers and T-shirts and had come of age in the period between the Iraq invasion and the publication of my bestselling book The Philosophy of Travel: The Consolations of Going on Holiday with Alain de Botton.

It was the intensity of their kiss that first attracted my perceptive attentions, but what had seemed like passion from afar was revealed at closer range to be unusual devastation. She was shaking with sorrowful disbelief; he was cradling her in his arms, stroking her short blonde hair, in which a hairclip in the shape of a tulip had been fastened. That’s the sort of revealing detail I’m good at observing. I might Tweet that one later if I can tart it up a bit. I evinced sympathy. It helped that she was extraordinarily beautiful. She could not have been unaware of her appearance. It would have been a significant part of her identity from the age of twelve, the minx.

Yes, I evinced sympathy, right at her, but in actuality there were stronger reasons to want to congratulate her for having such a powerful cause to feel sad. We should have envied her for having located someone without whom she so firmly felt she could not survive. If she been as sagacious as me and able to view her situation from a sufficient distance, she might have been able to consider it as the high point of her life: the moment when her pleasures and sorrows fell under the perceptive scrutiny of Anglo-Swiss philosopher Alain de Botton who, with the self-control of Odysseus negotiating the Sirens, continued along the Holland Park streets in which the ululating pigeons appeared to be rebuking this domestic English morning for its somnolence. Oh I say, that’s good. 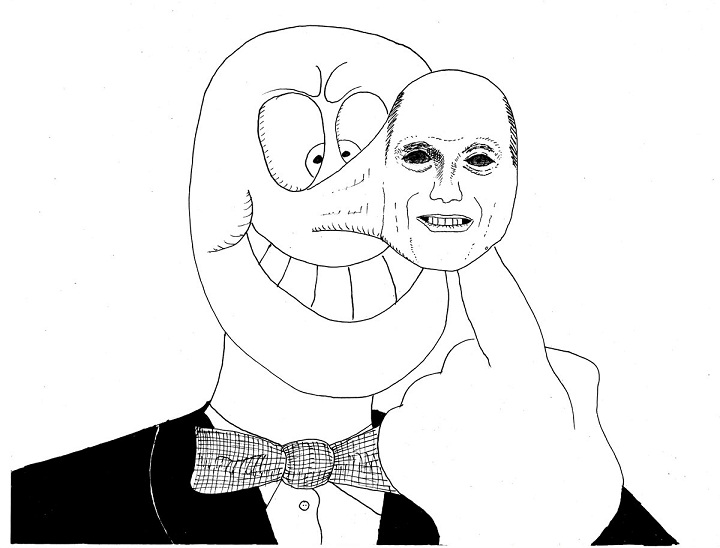 At the house of Elton John, he is shown up a marble staircase and into the dining room by a ludicrously-dressed footman who, de Botton perceives with the perceptive bits what he has in his brain, has balanced the profound sadness in his soul with the consolation of serving one who is, by curious definition, less free than his own servant. Ooh that’s a Tweeter. All twaddle, mind, since the footman is really Noseybonk in disguise, who sees all and laughs at it like a drainful of gits.

On entering the room de Botton starts and emits a gasp, being immediately confronted by what seems to be his lanky domehead mirror-image or doppelganger only more clown-haired and wrecked. But in fact it is just Art ‘The G’ Garfunkel, politely standing to greet him. Around the commodiously behemothic, which is by way of saying in a pointless way, big, dining table sit a shedload of Adult Contemporary singer-songwriters. Billy Joel is there, fat and tired. Jack Johnson is humming a dooby-dee-dah-de-dum-de-dum with intense hatred. Al ‘The Year of the Cat’ Stewart is there, being not dead yet. Gary Barlow is there too, being worried about what happens when Robbie Williams screws it up for everyone again. They simper obsequiously, sucking up and that, at the Anglo-Swiss philosophe who as he is well aware holds all the trump cards.

Double doors swing and in comes Elton, pushed in his exquisite, cherub-decorated, porcelain bathchair by poor morose old Bernie Taupin, whose back is giving him some right rotten gyp. “Wheel me to Alain, darling!” croaks Elton. “I’m going to kiss his hand!”

Unrepeatably chundermaking creepings ensue as each of the singer-songwriters tries to ingratiate himself with the author of How Reading Me Talking About Myself Can Improve Your Life, ie. Make it More Like Mine, a thing they’re all bleeding useless at having little experience at being nice to other people and nothing to go on except to mimic weakly the toadying behaviour of their own innumerable lickspittles and hangers-on. Only Jack Johnson refuses to bend the knee, interrupting the farce by bellowing: “Enough already! Let’s get down to brass tacks, dudes.”

Alain de Botton nods perceptively, leaving a hint of ambiguity to show he sees a bit deeper than that, but do go on.

“Look it’s quite simple, darling,” continues Elton. “We want to use your Tweets in our songs. We’ve all got the most hideous writers’ block… Haven’t we Bernie? [he asides viciously at the morose lyricist]…. And your Tweets are just the most perfect Adult Contemporary words ever. Now, what do you want in return? Name your price, darling.”

“Anything at all dear, just say it.”

“Anything, my good man,” inserts The G.

“Well there is one thing I’ve always dreamed of…But…”

“Go on,” says Elton encouragingly. “Spit it out, Limey!” snarls Jack Johnson, before Billy Joel can shush him.

“Is…an international airport named after myself.”

There is a non-plussed silence.

“Oh there wouldn’t have to be any actual planes coming or going,” explains de Botton dreamily. “Or real passengers. It would just be a wonderful, quiet space. A between place, a not-quite-place. Where people could come to feel the consolations, pleasures and sadnesses of travel, only, without the travel. Alain de Botton International. Where people could come to gain the wisdom and insights of my works…”

And, almost unbidden, quietly at first but growing louder and bolder a song that has long been lurking in de Botton’s heart comes sweetly pouring out into the air of Elton’s dining room, and he sings…

I’d build an international airport with runways by the dozen,
Right in the middle of the town.
A fine glass roof with blue carpet floors below.
There would be one long travelator just going up,
And one even longer coming down,
And one more leading nowhere, just for show.

There’d be a hundred-foot billboard of my remarkable cranium
For the town to see high above.
The Waterstones would stock only my philosophical books
And my debut novel Essays in Love

The most important men in town would come to fawn on me!
They would ask me to advise them,
Like a Solomon the Wise.
“If you please, Alain de B…”
“Pardon me, Alain de B…”
Posing problems that would cross a rabbi’s eyes!
And it won’t make one bit of difference if i answer right or wrong.
When you’re Swiss, they think you really know!

If I were rich, I’d have the time that I lack
To sit in Costa Coffee and muse.
And maybe have a seat by the eastern wall.
And I’d discuss my life and books with the learned men, several hours every day.
That would be the sweeeeeetest thing of aaaaall.

Spent, Alain climbs carefully down from the table, across which he has been a-stompin’ and a-shakin’ towards his atonal crescendo, which, Alas!, has fallen stillborn into grim hush.

Al Stewart pretends to see something out of the window. Gary Barlow, blushing empathetically, is examining his fingernails. Billy Joel moans into his fists. Jack Johnson grins hate. The G gapes. Taupin is morose. Elton, frowning, tinkles a porcelain bell.

Noseybonk in ludicrous footman disguise bumrushes the empty-handed thinker down the staircase and into the indifferent Holland Park streets, and one more incident is added to the many hundred, thousand, countless deeds and sayings at which in decades to come Anglo-Swiss philosophe Alain de Botton will look back through black chaffinch-bellied eyes under a hairless cranium-dome, and cringe to the roots of his very soul.

Buy Noseybonk’s e-book Blogmanship: How to Win Arguments on the Internet Without Really Knowing What you Are Talking About. Apologies to Topol. Noseybonk can see you. Illustration by Stan Madeley.