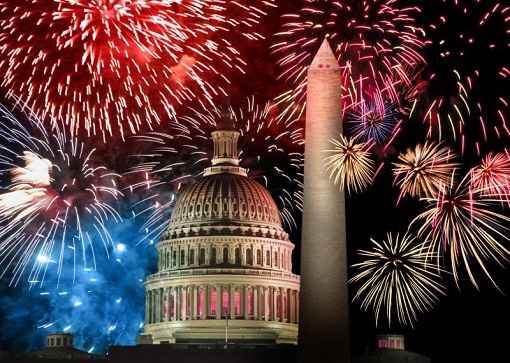 Parades, picnics, fireworks, and flags. Tomorrow is the great American national holiday celebrating a bunch of traitors to the Crown. Or as they are known over here, Patriots.  During my early years in America I maintained a studied indifference to July 4th and enjoyed teasing my American friends with threats to hang out a Union Jack to compete with the Stars and Stripes. The excessive patriotism on display made me uncomfortable, especially as in those years flag-waving was indelibly associated with pro-Vietnam war sentiments.  You might have expected this attitude of mine to continue into the even more jingoistic Reagan years, but in the 1980’s something changed. By now the parent of two young children, I was drawn into the family rituals associated with the holiday. Who can resist a neighborhood parade of little kids riding tricycles bedecked with red, white, and blue streamers and little flags? Or the homely comforts of a back yard barbecue with the traditional menu of hot dogs, hamburgers, watermelon, and a frosted birthday cake for the nation?

But the real clincher was the fireworks. Until my first July 4th fireworks display my only pyrotechnic experience was Guy Fawkes night, my father setting off a few rockets and Catherine wheels in the back garden while we waved sparklers around. It was all rather tame, especially with my Irish grandmother tut-tutting in the background because as good Catholics we really shouldn’t be celebrating the execution of a martyr for the faith. The July 4th extravaganza, fireworks filling the sky with explosive wonder, was thrilling on another level entirely. It became a family ritual. Loading up with flashlights and blankets and bottled water to beat the heat. Setting out to the local fairgrounds early enough to grab a good spot, spreading the blankets and settling down for the long wait for sunset so the show could begin. I will never forget the first time my son saw the fireworks. He must have been only two or three and had no idea what we were talking about when we said “fireworks.” He was restless and boisterous as we waited and then a little scared as darkness fell. But when the first firework burst overhead he fell back on the blanket, mouth agape in awe, and never moved until the dramatic final crescendo.

For years we attended local fireworks, but as the children grew up we sometimes braved the crowds downtown to join the official celebration in the nation’s capital. Nothing can compare to the view from the Mall, seeing the fireworks explode over the Washington Monument. Though afterwards you can’t help but wonder if it was worth it as you struggle to get home on the troubled Metro system, notoriously inadequate for holiday crowds.

There have been some especially memorable pilgrimages downtown over the years. Like the time we were accompanied to the fireworks on the Mall by a Royal Marine. My nephew’s ship docked at Norfolk, Virginia and he made a surprise visit over the July 4th holiday. I am happy to report that he did not wear his uniform to the event.  Perhaps the patriotic assembly would have regarded the presence of a Royal Marine as a provocation.

In another memorable year we visited the Folklife Festival on the Mall, an annual event sponsored by the Smithsonian, which spans the weeks surrounding July 4th. The Festival celebrates cultural traditions, both American and international, with music, art, crafts, cooking, storytelling, and children’s events. In this particular year the theme of the festival was The Silk Road. As you walked the Mall you passed through all the cultures on the ancient Silk Road from Venice to Istanbul, from Samarkand across the Central Asian steppes to Xi’An in China. The Silk Road Ensemble, a group founded by Yo-Yo Ma to explore eastern musical traditions, was scheduled to perform. It was rumored that Yo-Yo Ma himself might put in a surprise appearance on the 4th. So we made our way to the small tent in plenty of time to be assured a good seat on the bleachers. It was unbearably hot inside but everyone waited patiently, a hushed sense of expectation palpable in the sticky air.

At last the musicians assembled, and then a flurry of activity at the back of the stage and Yo-Yo Ma appeared. He was casual and charming, explaining the different instruments and the cultural background of each piece. He was also humble, not acting the big star, but deferring to other musicians to take the spotlight as called for by the music. Indeed it was the opening performance by another musician that was, for me, the highlight of the concert. A young Asian woman stepped forward and played the National Anthem on the erhu, a two-stringed Chinese violin. To hear the familiar tune, so often tortured by horrid renditions, played so simply and so hauntingly on this beautiful, unfamiliar instrument was an unforgettable musical experience.  It is certainly the most beautiful version I have ever heard. As the last note resonated there was a deep hush in the audience. Then we all rose to our feet and gave a long, heartfelt ovation. There were tears in many eyes, my own included.

Something about this performance evoked the best thing about America. Here we all were from different countries and cultures, free to celebrate our own traditions, free even to celebrate foreign cultures in the very heart of the nation, on this, the nation’s birthday. No one could have been more surprised than I when I felt a surge of, yes, genuine patriotism.

11 thoughts on “Surprised by Patriotism”