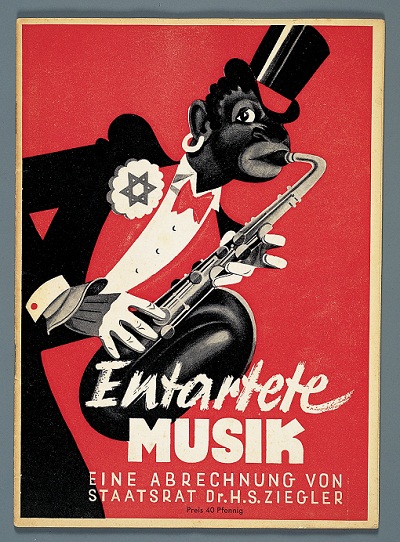 Hitler’s assault on ‘degenerate art’ – that deemed to be decadent or harmful to the Nazi project – affected not only visual artists but also some very talented musicians. Mahlerman picks out some of the best examples of the Entartete Musik…

Almost exactly eighty years ago Adolf Hitler, exercising his recently acquired powers as Chancellor, declared his National Socialists to be the only political party in Germany and himself leader or ‘Fuhrer’; in six short months he had wiped German democracy from the map, and set in train his plans for the ‘purification’ of the Fatherland, at the expense not just of Jews and Gypsies, but of the infirm (I would have lasted about a week) and feeble-minded.  There was also a ‘marginalisation’ of Slavs, Bolsheviks and homosexuals. As we now know, the madness lasted for twelve years and left much of Europe in ruins.  So-called ‘Entartete Kunst’ –  Degenerate Art  – embraced virtually any ‘modern art’ and, as its classification depended upon the particular view of the adjudicator, very little ‘visual art’ survived scrutiny, and the practitioners usually either went into hiding or fled, often to America.  This totalitarianism eventually corralled musical composition – music deemed to be harmful or decadent, or that might suggest criticism of the Nazi regime, and would henceforth carry the moniker ‘Entartete Musik’ Degenerate Music.  Unfortunately for musicians and the progress of musical composition, the Third Reich did not view music as just another art form.  Their fevered imagination freighted music with a unique significance as ‘the most German of all the arts’, and with a recent history starting with JS Bach, and continuing through Mozart, Haydn, Beethoven, Schubert and Wagner, they were standing on pretty secure ground.  The limping dwarf Joseph Goebbels put it quite simply: ‘Music affects the heart and emotions more than the intellect’.  This was the legacy of the true German Nationalist;  this, and only this, could be accepted by the Party.

Regular Dabblers may recall that last June in Les Bohemiens we looked at the Silesian Viktor Ullmann’s marvellous chamber-opera Der Kaiser von Atlantis, composed in Auschwitz-Birkenau just before he was gassed.  Today I have tried to seek-out some more beauty in this barren landscape.

The German composer Walter Braunfels was one of the few musicians branded ‘degenerate’ who lived to a decent age (72) and died in his own bed.  A promising career as a pianist and composer developed in the 1920’s until, in 1933, he was dismissed from his post at the Hochschule in Cologne for being ‘half-Jewish’ and publishing music that the Reich considered ‘degenerate’. I can’t imagine that the ‘adjudicator’ could possibly have considered the present work, Die Vogel as anything other than life-affirming. The influence of Richard Strauss is uppermost in this aria, where the great German coloratura soprano Ingeborg Hallstein impersonates a nightingale.  Here is a composer that should have been better known then, as he should be today.

If the Russian Jew David Nowakowsky was indeed a Master, as this touching, wordless film suggests, it was in a very narrow field – the marriage of ‘synagogue music’ with the 19th Century tradition of European art music.  Nowakowsky lived a long and artistically rewarding life in Odessa, but none of his major compositions were published in his lifetime – and while musicians generally resided at the bottom of the social order, the cream of synagogue singers, the chazzanim, dined at top-table.  He spent the remaining 50 years of his life as a cantor and teacher at the Brody Synagogue, his talent recognized by many, including Tchaikovsky.  He had the good fortune to die twelve years before the rise of Nazism, but he merits a place in this survey due to the extraordinary story of how his manuscripts were saved from Nazi liquidation.  One of his five children Rosa, amongst the chaos that followed the Bolshevik revolution, managed to smuggle his scores out of Russia to Berlin after her father’s death in 1921.  Rosa’s daughter Sophia was living in Berlin with her husband Boris, and had become a well known concert pianist.  The hope was that they could find a publisher, but as the Nazis rose to power it became obvious that publication would be impossible and, following the government declaration that her grandfather was a ‘proscribed composer of degenerate music’, possession of the manuscripts became a mortal danger.  Boris managed to smuggle a collection of manuscripts in two German ammunition boxes, to Archamps in Vichy France, and the film below begins with the French Farmer he entrusted with the treasure, burying them on a farm in 1943.  At the end of the war Boris returned and, with help, found the boxes and the scores they contained, and they eventually arrived at the Hebrew Union College School of Sacred Music in New York. A minor figure then, but no less interesting for that fact.

There seems little doubt, to me anyway, that even on the slight evidence of the Passacaglia & Fuga for Violin, Viola and ‘Cello, the Bohemian Jew Hans Krasa was a major talent.  The satirical side of his work, what has been called the ‘unclassifiable wit’, which is usually intermingled (as here) with a quiet poignancy, or something of the grotesque, recalls Shostakovitch at his most ironic.  And it all unfolds quite naturally; nothing seems to be forced – always a good sign.  In 1921, the year that David Nowakowsky died in Odessa, Krasa was studying with Alexander Zemlinsky (a pupil of Mahler) in Prague, and it is perhaps from this lyrical master that he inherited the beautiful sound-world that is evident in almost everything he wrote.  The Nazis sought to destroy that beauty and Krasa, after spending some years in Theresienstadt, was sent to Auschwitz where, along with Viktor Ullmann, Gideon Klein(below) and others, he perished.

The String Trio was completed in Theresienstadt about a week before Gideon Klein was transported from that horror to the even greater one at Auschwitz and, shortly after, Furstengrube.  We learn that upon his arrival there he was stripped naked along with other internees, to await a medical examination.  The room contained a piano, and the SS officer guarding the prisoners asked whether any of them could play.  The one-time virtuoso played a piece that a neighbour Hans Schimmeling, (who survived) did not recognize, nor, we can assume, the SS guard.  Schimmeling was convinced that, had Klein ‘played up’ to his tormentor by providing perhaps a popular tune, it might have saved his life.  It was the last known sighting of this amazingly talented Moravian Jew who, during his years at Therezin had been a teacher, performer and composer, as well as an opera producer and piano restorer.  As the Red Army closed in, he probably died on one of the many forced marches away from the front line.  He was not quite 26 years old.

One thought on “Degenerate Music”