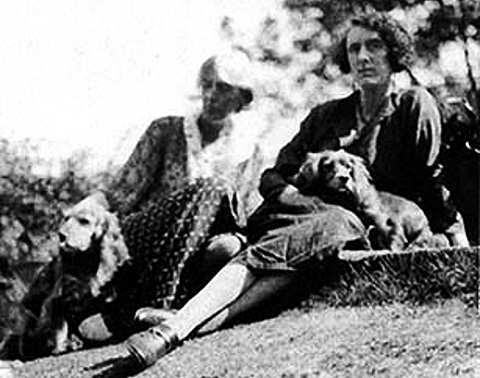 The more Nige reads of Violet Trefusis, Vita Sackville West and Virginia Woolf in this excellent group biography, the more appalling they seem…

The biography business – driven by modern research and documentation methods, publishers’ demand for fat volumes, and the ever-grinding mills of Academe – does have a tendency to gigantism, to burying quite minor figures under great tombstone slabs of biography. Happily, some of our best biographers have a more supple, graceful – and mercifully more concise – approach. Both Richard Holmes and Michael Holroyd – with their monumental single-subject biographies behind them – are gravitating toward short lives and group biographies. At the same time, both are increasingly blurring the boundaries by introducing themselves into the biographical narrative – a development that, I gather from a recent conversation, is causing much excitement in the field of Biography Studies (although it goes back to, at least, A.J.A. Symons’ Quest for Corvo).

Michael Holroyd’s A Book of Secrets (available for a penny from Amazon) is a fascinating and immensely readable group biography of a set of people all linked to the Villa Cimbrone, the glorious gardens of which rise over the town of Ravello on the Amalfi coast. The villa and its gardens as they are now are largely the creation of Ernest Beckett, Lord Grimthorpe, an English politician of whom, I must admit, I had not heard before. He seems to have been quite a lad, with an eye for art and, especially, the ladies. The first part of the book follows the intertwined lives of Beckett and one of the loves of his life, Eve Fairfax, who became a favourite model of Rodin’s. Much of the rest of the book is dominated by the relationships between three women, all of whose names begin with V, and all of whom are pretty ghastly: Violet Trefusis, daughter of Beckett by the famous Mrs Keppel (the Prince of Wales’s mistress), Vita Sackville West and Virginia Woolf.

The more you read on, the more appalling these women seem in their dealings with each other and with the others in their lives – self-indulgent women with too much leisure and money and an inflated idea of their own importance and abilities (okay, that’s a harsh judgment on Woolf, maybe). However, Holroyd handles them with a light touch, letting in plenty of air and light, commonsense and humour, and interweaving their stories not only with each other, but with his own, as he pursues his researches, visits the Villa Cimbrone and meets an Italian academic who seems to be posthumously in love with Violet. As a result of this approach, the three Vs are not the intolerably oppressive company they might have been. And it makes for quite a story, especially when Violet and Vita get going. Vita’s treatment of her husband, Harold Nicolson, is bad enough (though at least the gay Harold was free to make his own amusements) – but it pales into insignificance against Violet’s treatment of the man she eventually deigned to marry. Poor Denys Trefusis was a war hero, magnetically attractive to women – and Violet treated him like dirt. Part of the reason is suggested in this startling account of a conversation with Lady Sackville, Vita’s redoubtable mother:

On the point of separating from her unfaithful husband, Lady Sackville had grown fond of scatological stories and coarse sexual anecdotes of horrifying male lust. What she said opened Violet’s eyes to what married life with Denys might entail. For though emotionally so alert, Violet seems to have been ignorant of the facts of heterosexual intercourse – until Vita’s mother made the details of men’s sexual habits ‘dirty and hideous’ to her. ‘Thank goodness I have been spared this horrible knowledge for much longer than most people,’ Violet wrote. ‘… No wonder I have always preferred fairy-tales to facts.

I must say I rather warmed to Lady Sackville. She also described one of Vita’s early novels as ‘brilliantly dull’ – a superb two-word description of a certain kind of writing. But most definitely not of this thoroughly enjoyable experiment in biography.