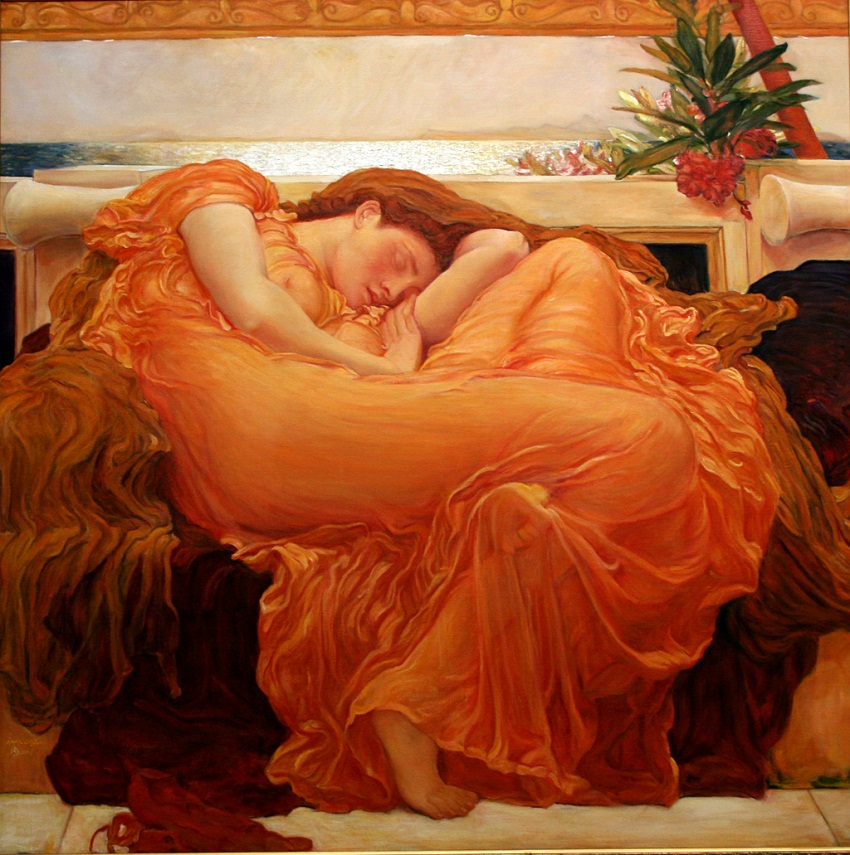 Nige reflects on the enduring appeal of a high Victorian painting…

‘Flaming June eh?’ we sigh, and roll our eyes, as the rain siles down relentlessly, the cold wind blows, and temperatures struggle to stay in double figures (in the new money).

And so, unwittingly, we keep alive the name of the one painting by Frederic, Lord Leighton (about whom I have written elsewhere) that has remained popular – hugely popular – long after his death, appearing in countless reproductions and on countless greeting cards.

It wasn’t always so. When Flaming June was put up for auction in the early 1960s, it failed to reach its more than modest reserve ($140), like many a high Victorian magnum opus at that time – such is fashion. However, in 1963, a Puerto Rican industrialist, on the look-out for artworks for a new museum, spotted Flaming June propped up in a neglected corner of an Amsterdam gallery, liked it, and bought it for $10,000. And that is why, to this day, one of Britain’s best known and best loved Victorian paintings resides not in Tate Britain or one of our great provincial galleries but in the Ponce Museum of Art in Puerto Rico.

As a painting, Flaming June is one of those that makes a big impact but is best not examined too closely. The close-cropped composition and all-suffusing golden-orange-saffron light are instantly arresting, and the picture delivers a good strong hit of heat, sensuous languor and Mediterranean sunshine – what’s not to like? Well, since you ask, the awkward, if not anatomically impossible pose (which gave Leighton a lot of trouble) and some rather feeble draughtsmanship; that apparently exquisite rendering of the diaphanous drapery (note nipple) turns out to be surprisingly approximate, giving no clear idea of what kind of material it is, or quite how it lies on that unnaturally posed body.

But never mind: Flaming June is a brilliantly effective and attractive picture – and looking at it certainly beats staring out of the window at the English rain.

One thought on “Flaming June”