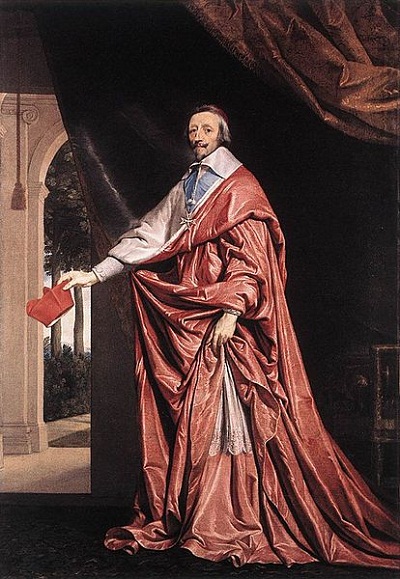 Cardinal Richelieu, about to jump

Frank reveals the exciting pastimes of the good and the great…

We know that, as a child, John Ruskin took great pleasure in digging holes and – a special treat! – jumping off his favourite box to land on the floor.

And we know that James Boswell, immediately on waking, liked to leap out of bed and “cut two or three brisk capers around the room, which he found attended with most agreeable effects. It expelled the phlegm from his heart, gave his blood a free circulation and his spirits a brisk flow, so that he was all at once made happy”.

But what sorts of pastimes and exercises have diverted other literary or historical figures? Isaac Disraeli, in his matchless Curiosities Of Literature, gives an account of some of the Amusements of the Learned.

When Petavius was employed in his Dogma Thealogiea, a work of the most profound and extensive erudition, the great recreation of the learned father was at the end of every second hour, to twirl his chair for five minutes.

Twirling in a seated position wasn’t good enough for Cardinal Richelieu. He preferred “violent exercises; and he was once discovered jumping with his servant, to try who could reach the highest side of a wall.”

Most amusing, perhaps, is the manner in which Baruch Spinoza liked to unwind from his philosophical labours:

After protracted studies Spinoza, would… unbend his mind by setting spiders to fight each other; he observed their combats with so much interest, that he was often seized with immoderate fits of laughter.

4 thoughts on “Amusements Of The Learned”