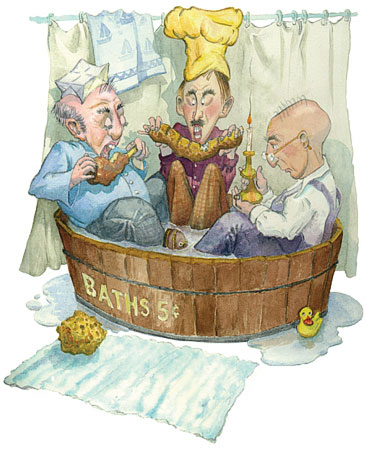 Rub-a-dub-dub means a pub in rhyming slang, or certainly so in Australia, where it can be abbreviated as rubby or phoneticized as rubbidy. Like a percentage of the type it stems from ascertainable origins, in this case the nursery rhyme ‘Rub-a-Dub-Dub’ which, if the original version of 1798 is correct, describes the voyeuristic indulgence of three small tradesmen: the butcher, the baker and the candlestick maker, in their espial of ‘three maids in a tub’. How this came about is unproven, but prevailing wisdom suggests some squalid sideshow at a small-town fair. By 1830 it was the poujadist threesome who had entered the tub, the maids have fallen prey to Puritanism or perhaps some better better employment, possibly that slang staple, the pliant, multitasking maidservant, e.g. the Scotch warming pan. The tradesmen remained however ‘knaves all three’ though no professional defalcation is specified.

The candlestick maker, like the loin inspector (meat-packing), the take-off girl (confectionary)  and the bottom waxer (shoemaking), not to mention a whole dictionary of terms dependant on the employment of the horse, has pretty much vanished, victim, like so many job titles, of onrushing technology. (Candlesticks are presumably still created, but the quotidian centrality of the task that brought their artisan to the rhyme has surely disappeared).

The candlestick itself gets a look-in: as the vagina it embraces the phallic candle, and since we know that ‘all the nice girls love a candle’ this takes us to candle-basher, a spinster though candle-eater is apparently a Russian and candle-shop a Catholic church (the parishioners are of course Roman Candles, which as a rhyme gives us sandals, though the unrhymed phrase is another take on the penis and, assuming religious conformity, an Italian).  The definition of candlesticks as small, bad or untenable bells defeats me; all campanological advice gratefully received – my only thought is that perhaps one cannot get a good note by striking a candlestick? The Trafalgar Square fountains were also known as the candlesticks , while so too is the mucus from a running nose: in both cases we are seeing the drip of running wax. Finally candle and sconce, another rhyme, means ponce, and to candle, punning on burn up, is to annoy. But no makers.

The butcher and baker fare better. Even setting aside the former’s preoccupation with and slang’s enthusiastic pursuit of every aspect of meat (and indeed poultry) which among so much else pairs the two in the crafty butcher, that gay catcher, who ‘likes his  meat round the back’, there are plenty of uses. Butcher itself is the penis (likewise butcher knife and yes, ‘if they’re old enough to bleed they’re old enough to butcher’), a second-rate barber and by extension any form of bungler. The king, in cards, is included. He is also a surgeon, whose operating theatre is a butcher shop, which also stands for a prison’s execution shed and for both a wedding ceremony (presumably herself goes under the knife or chopper though she may, since slang cannot resist a pun, be dripping for it like a butcher’s daughter) and, back to ‘raw meat’, the vagina.

Butcherly compounds give us the butcher’s canary, a blowfly (Linnealy linked, surely, to the dunny budgie), the butcher’s cart or wagon, an ambulance, the butcher’s dog, a married man who like the canine can ‘lie by the beef without touching it’ (there may be parallels with the swaggie’s dog, though he, whose scraps are violent rather than meaty, is ‘all prick and ribs’), a butcher’s horse, which refers to the rider, who is no good, and a butcher’s picnic, any rumbustious occasion. Butcher’s meat is bought on credit, since it remains, at least legally, the butcher’s property unil paid for, while butcher’s mourning, worn at the races rather than the graveside, was a curly-brimmed white beaver hat with a black band.

Space is ebbing but I cannot omit some phrases: to go in like a butcher’s cat: to attack hard; to talk to the butcher not the block, which emulates such preferences as that for the engineer over the oil rag. We should also note Australia’s butcher, a glass of beer (various sizes have been specified) which sems to be a version of German becher, a beaker or form of lidded drinking vessel and America’s butcher, who sold sweets, fruit, soft drinks and the like, typically in a cinema or a railway train. The butcher’s hook, of course, rhymes: on look.

Thence to the baker. He is an idler (he loafs), an electric chair (you bake) and the grade of B. To be knock-kneed is a classic occupational affliction: thus baker-kneed or –legged means knock-kneed and since knock-knees signify, say some, a lack of masculinity, effeminate. The baker’s dozen rhymes to make cousin (baker’s yeast means priest) and, allegedly dating from the laws of Edward I, the number 13, supposedly the response of bakers fearful of being accused of short measure. To give a baker’s dozen, however, one of slang 373 synonyms for administering a thrashing. To be christened by a baker is to have a freckled face (the spots of suggest those of brown flour). Finally, and those of gentle mien should back off now, bakery goods, equating the flesh with an oven, are the buttocks or anus (thus to bake it being to hold off defecation); flying baker is menstruation (the flag signifying B is ‘red’) and a muffin baker is the source of constipation: hardened, intractable excrement. This too rhymes, on quaker, which, from the image of browness, draws together the sect and the stools.

2 thoughts on “Three men in a tub”