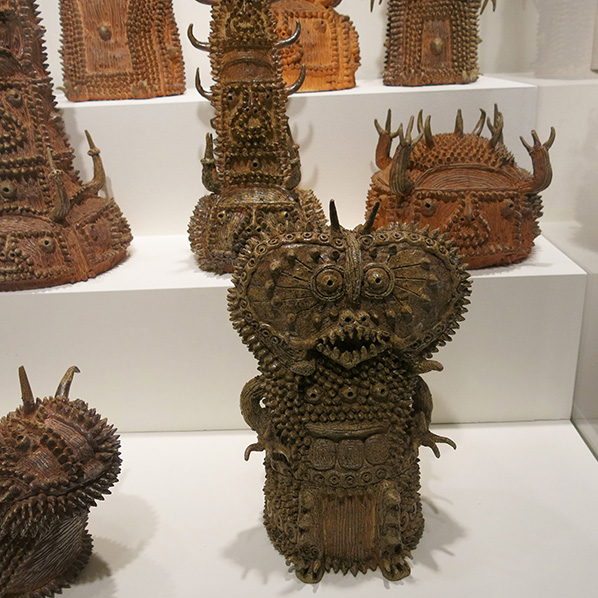 Belated Happy Easter! Television highlights of my Easter weekend included Easter at King’s and Barabbas, starring Anthony Quinn (holder of a 100% rating on Rotten Tomatoes). By far the best entertainment was provided by a friend’s 86 year old mother, who played the piano and sang like an angel after lunch on Easter Day. Over the weekend I also discovered that I could wedge a book against my iMac using the keyboard. This makes quite the perfect bookstand.

My (Oxford educated) husband enjoyed the Boat Race, which he deemed to be more like a procession than a race. I wonder if the requirement for ‘all roundedness’ in the race could be relaxed in favour of stricter rules relating to the age, weight and origin of the participants.  How about more British undergraduate rowers for starters?

One of the television commentators described the boats as looking like “giant eight-legged creatures.”  This reminded me that the Wellcome Collection currently has a collaboration with Pestival – “a cultural organization exploring our relationship with insects and the natural world.” A gastronomic insect feast and Insects Au Gratin workshops are on offer, alongside other entomological events.

My own encounters with insects have, thankfully, been rare. As a child, I recall being stung on the head by a bee whilst sitting on a bus – and finding an unusual bee fly, which I kept in a box (it was dead).

Later in life, on Peter Island in the British Virgin Islands, my bathroom was invaded by giant flying cockroaches every night for two weeks. At a St Lucian hotel, between the Pitons, a scorpion lay in wait under my wash bag. And I once saw some pretty nasty creatures emerging from a drain outside the Mandarin Oriental in Hong Kong.

But these were nothing compared to the insect I happened upon in the business class lounge at Lusaka airport. I picked up my hand luggage and underneath was something large, black and nightmarish. It looked like a cross between a praying mantis beetle and a prehistoric monster. I’ve no idea what it was, but I hope I never see anything similar again.

If insects aren’t your thing, I can highly recommend the Wellcome Collection’s Souzu: Outsider Art from Japan (see photo above) – one of the most surprising and heart-warming exhibitions I have seen in a long while.