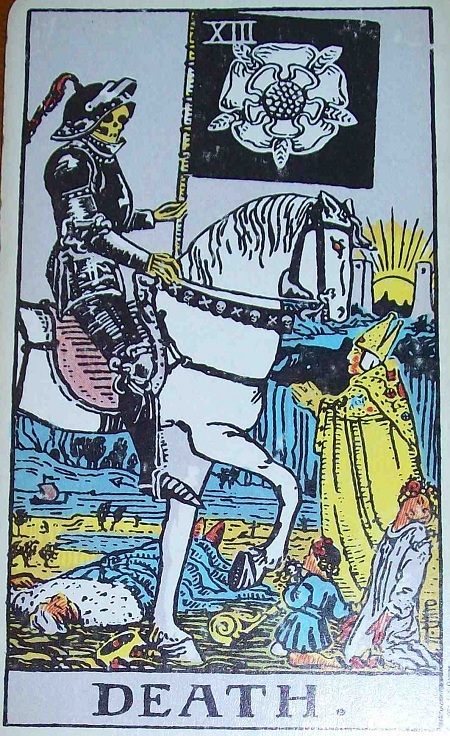 Slang provides 135 synonyms for death, and 235 apiece for ‘die’ and ‘dead’. Jonathon Green goes in search of the Grim Reaper…

Ding-dong, the wicked witch is dead. So have the celebrants pronounced, but doesn’t singing that render one a Munchkin and surely the only useful time for a dictator to die is immediately prior to the assumption of power. Why celebrate when the damage has long since been done. In any case, the over-riding tone of the media of whatever political hue reminds me of Harold Laski’s comment ‘De mortuis nil nisi bunkum’. Judith Flanders (once of this parish) sent me another play on the Latin tag: ‘I doubt, said the Bishop of Balham / That Tennyson ever had Hallam. / Let’s hope that he did / Tho such things are best hid / De mortuis nil nisi malum’ which does the usual thing with the decent obscurity of a dead language. Malum let it be.

Slang, unabashed, does not do decency, though one cannot deny its occasional disappearance behind the obscure. This is especially true of its take on death, for which it provides 135 synonyms, and 235 apiece for the verb die and the adjective dead. Synonym, I stress, a term that is not to be confused with euphemism (no passed on here) but in this context runs alongside dysphemism. Dysphemism or perhaps a cut to the chase.

Termination is the name of the game: the last farewell, goodbye, muster and roundup all suggest the solemnities of a final departure, as does Raymond Chandler’s long goodbye (the title of his 1953 novel). Chandler also offers the big sleep  (this eponymous novel appeared in 1939), a term that seems to reek of gangland authenticity , but which the oil executive-turned-novelist created in his own study. Elsewhere, death-related material grabs the imagery of livelier activities. Thus curtains and the final curtain evoke the stage, fadeout comes from the movies while lights out evokes a dormitory or perhaps a barracks, and the end of the ball game the culmination of a baseball encounter. Kiss off, push off and send off are logical enough — each implies departure — but kickoff is slightly paradoxical: as much as finality it implies a beginning, it is, as it were, the start, not the end of the ball game. Only the big chill and cold storage present a genuine whiff of the morgue.

Although the 19th century offered go aloft, go up, join the great majority and join the angels and spiritualist euphemism has cross over, up references to heaven are relatively rare. Gambling, sport and the sea have a far more substantial representation. The former, for instance, has to be thrown for a loss, cash in one’s chips, crap out, throw a seven, have one’s chips, have one’s number come up, pass in one’s checks or chips, put one’s checks in the rack, throw in one’s cards or hand. Strike out, drop the cue, peg out, hang up one’s harness, jump the last hurdle, go to the races, throw in the sponge and take the long count, draw variously on baseball, snooker, cribbage, horse-racing and boxing.

The sea is especially fertile in images of demise. Aside from the sailors’ own go to Davy Jones’ locker, landlubbers have taken over cut or slip one’s cable, keel over, lose the number of one’s mess, give up the ship, drop off  or sling one’s hook; drowning engenders go feed the fishes and turn into fish food (and let us never forget the late and somnolent Luca Brasi). Answer the last roll-call and answer the last muster may have nautical origins too, although answer the last round-up is definitely a product of dry land — notably the American West, which is also the source of bite or kiss the dust. America too furnishes buy the farm, a Word War II coinage which refers to the wish of US aviators to retire from combat missions, buy a farm and settle down. The term referred ironically to those whose ‘retirement’ came somewhat sooner than they might have desired. To go West, however, has nothing to do with land of cowboys and Indians; rather it refers to the last trip an 18th century villain would make, moving from Newgate westward towards the gallows at Tyburn (now Marble Arch). The term also has some flavour of the metaphorically ‘setting sun’ — which descends in the West. Judicial departure is world of its own, but a couple of general phrases also reflect the moment of execution: get it in the neck (from an executioner’s blade) and kick the wind (as one hangs).

The act of dying draws on a wide variety of sources for its imagery. The animal kingdom offers hop the twig and go belly up (like a dead fish), while nature has drop off the twig (like a leaf); domesticity, especially in the context of eating, gives lay down one’s knife and fork, go for one’s tea, hand in one’s dinner pail and hang up one’s hat; stick one’s spoon in the wall has the requisite finality, but its etymology remains mysterious. What may be the ultimate in food-related images is kick the bucket, which dates back to 1570 and has been accorded two, not wholly dissimilar origins. The first refers to a method of slaughtering a pig: the animal is suspended from a beam by the insertion of a piece of bent wood behind the tendons of its hind legs; this piece of wood is known as a ‘bucket’; the dying animal naturally kicks out at the bucket. The second is more marginal, and refers to an ostler working at an inn on the Great North Road who killed himself by hanging; to gain the necessary drop he stood on a bucket, kicking it away as required. Other metaphors are conk out (like an engine), snuff it (thus the ‘snuff movie’), take an earth bath, take the big jump and come to a sticky end.

The physical act of dying is reflected in croak (the death rattle), turn up up one’s toes, curl or cock up one’s toes (19C); resignation underlines call it a day, call it quits, turn one’s face to the wall and give up the ghost, while decay is echoed in feed the worms, push or kick up daisies and kick up dust. Departure is seen in kick off, check out, bow out (more theatrical imagery), take a powder, pop off (18C) and slam off. There are few verbs for leaving that cannot (and have not) been recruited to serve as softeners for death.

Finally come pop one’s clogs (pop meaning pawn; the inference is that only in extremis would one ‘pop’ one’s clogs, given the role they play as indispensable footwear), and go to Peg Trantum’s (who knows; only that  Peg Trantum is East Anglian dialect for tomboy).

‘Dead’ naturally modifies some of the verbs listed earlier, but takes the opportunity to expand the grim lexicon. Those for whom all bets are off, who have been put to bed with a shovel, whose hash is settled, whose number is up and whose race is run, who are out of their misery, down for the last count and moved out of the picture have gone belly up and across the river. Let us, hypocritically, give the last word to religion: they have gone trumpet-cleaning — the trumpeter in question being the angel Gabriel. Space is my enemy: this is but a selection, the potential vocabulary is open to synonymists everywhere.