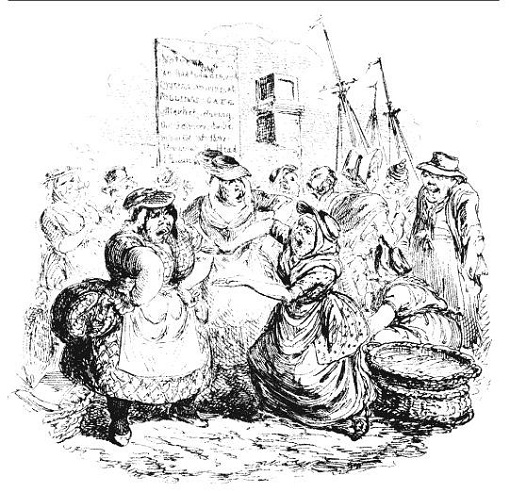 Billingsgate. As in fish. As in Belin’s Gate which may memorialize one Belin, who, according to Charles Dickens Jr’s Dictionary of the Thames (1881) and quoting Geoffrey of Monmouth, was a king and built the first water gate on the site around 400 CE. The gate, giving onto the Thames, was indeed a water one, and an original quay once existed, as perhaps did a southern section of the city wall erected to hold back the river; both have long vanished in the unequal battle of stolid land and energetic water. Belin, however, may have been less grand, and merely the owner of the riverine acreage. It is all a long time ago and who’s to know.

Fish were one of the cargos landed there from the 13th century and earlier (it is mentioned in the laws of Ethelred), but the piscine link only became formal in 1699 when a statute declared the site as the city’s single fish market; after that it’s all open sheds and bummarees (etymology sadly unknown) bargaining over freshly unloaded catch until the Victorians as was their way required something more splendid. That appeared mid-19th century – the building is still there: a mix of offices and party space – and lasted till 1982 when the market packed up and relocated at Poplar. Only Smithfield remains of central London’s great wholesale produce markets and its days are numbered.

Fish meant sailors but also fish wives, sometimes known as fish fags (defined by Hotten in 1873 to a generic for ‘any scolding, vixenish foul-mouthed woman’; the fag perhaps an abbreviation of faggot, an unflattering synonym for ‘woman’), and generally identified with language as foul as the guts or puddings they ripped from their ichythoid stock in trade. The eponomy of the place name and the alleged foulness of the language used by those who worked there is first recorded in 1676 and flourished as a stereotype for three centuries.

Yet try to trace some authentic Billingsgate and where is it? There are illustrations by such as Rowlandson and Cruikshank: Fishwife A, large of breast, solid of buttock, arms akimbo, mouth agape, assails Fishwife B, similarly accoutred, though perhaps in contrasting colours. The caption may offer suggestions but they are en-blanked and on occasion the fishwives are neither female nor engaged with fish but such as Pitt or Fox en travesti and the connoisseur of eponymy has nothing to latch onto.

Ned Ward and Tom Brown visited, noted the abuse, tease us with references to ‘stupendious obscenity and tonitrous verbosity’ but not its details. Both also offer  what they termed river wit, which came from the transfluvial  successors of the waterman and poet John Taylor, who was a genuine wit, albeit coarse at times. It was safe abuse: neither party came within anything but hailing distance of the other. Brown’s example, bending to the scatological and delivered between passing boats, runs thus:

How-now, Old Dad, whither are you carrying that King of the Gypsies you have picked up for a Fare ? Why he looks as if he had painted his Face with a Child’s Surreverence, to make his Countenance shine like a Turmerick Pudding. Out, you nasty T—d-coloured Dog, born upon Dunghill without a Head, that your Mother was forc’d to supply the Defect with a yellow Pumpkin.’ Which unsavoury Compliment was thus retorted by our foul-mouthed Prolocutor, ‘Stop your Smoak-hole, nincompoop; what laden for Puddle-dock with Taylors, Bailiffs, fat Bawds, and Chamber Maids? Shoot your Rubbbish, you rogue, at the next Lay stall, and carry back Dung to the next Gardeners House that you may beg a Bunch of Carrots for the Sow your Bed-fellow, to stop her Mouth from Scolding. […] O rare Tom Sanders you lye like a cuckold: Get you gone, you old Fumbler to my Dame of Tofield’s Daughter and make a Fool of the poor Wench in the House of Ease and afterwards kiss the Mother upon Horn-Fair-Day for Nuts, and Ginger-bread.’

Surreverence is excrement, Grose would define nincompoop as ‘a foolish fellow; also one who never saw his wife’s ****’, a laystall is a urinal, a fumbler an impotent, and Horn Fair a ‘celebration’ of cuckoldry. Smokehole may mean mouth, but also anus (as in ‘talking through…’), and my money’s on carrots (and possibly nuts and gingerbread) as a double-entendre. 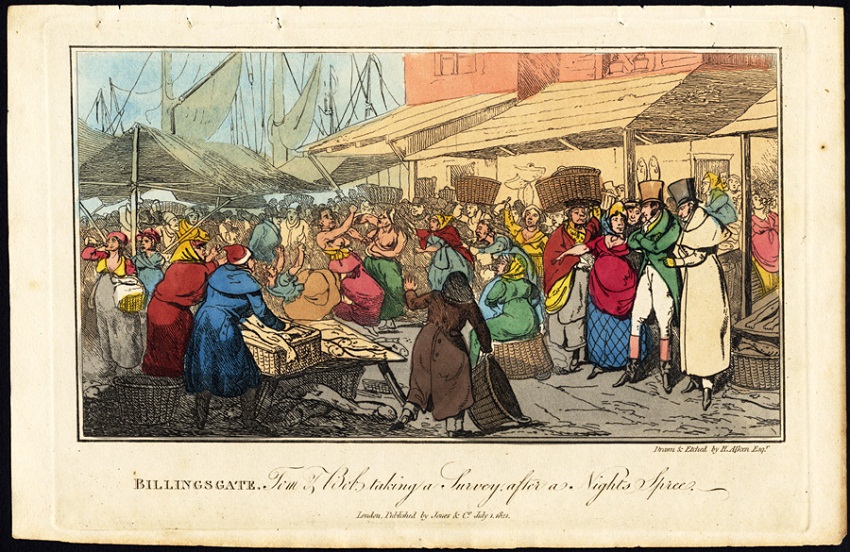 Jon Bee, in his 1821 rip-off of Egan’s Life in London, took his Corinthians Bob Tally-ho and Tom Dashall there. An earlier ballad, ‘The Bloody Battle at Billingsgate, Beginning with a Scolding bout between two young Fish-women, Doll and Kate’, promises much but is conducted in standard English, with a few trulls and punks thrown in for good measure. There is some tearing of both gowns and hair but in the end all is love and peace, washed down with two quarts of hot ale and brandy.

According to Boswell, Johnson, on a bet, volunteered to reduce a fishwife to fury simply by using terms of which she was ignorant. He called her a succession of parts of speech – an ‘article,’ a ‘noun,’ a ‘pronoun’ and so on. The bet was duly won and the unfortunate woman threw herself into the market mud, unable to respond to terms she failed to understand, railing dejectedly against this unfair ‘blackguarding.’

‘Old’ Billingsgate has departed although modern reports still testify to a certain linguistic vigour. We must hope. Already, in 1914, a smug report could claim that OLD BILLINGSGATE VERNACULAR LOST.  LONDON’S FISH MARKET HAS MENDED ITS MANNERS and stated that ‘”Aw, git orf, carn’t yer,” [is] the most outrageous extent to which one “lady” will venture with another.’ Cocks on this particular dunghill, the evangelicals: ‘Our Sunday schools, Bands of Hope, temperance meetings, and home visits have done an everlasting amount of good among the people here. It is only the loafers who are responsible for keeping up the bad name of the neighbourhood.’

The original building, gussied up and presumably fish-free, is currently touted as a venue wherein City boys and girls may gather to squander bonuses. Plus ça change, as I have had occasion to note before.

7 thoughts on “The Slang Guide to London: Billingsgate”