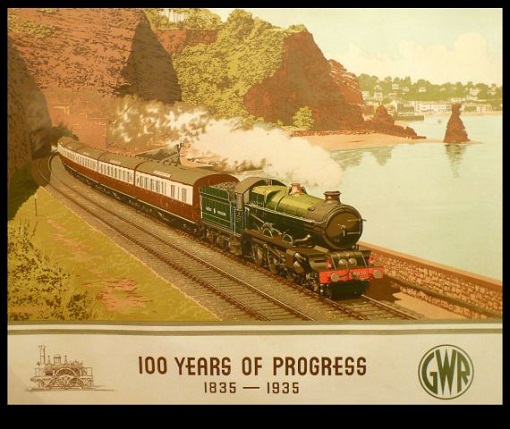 As a child I developed an almost fanatical love of the steam engine; I doubt Betjeman felt that love any more intensely. Winter was a favourite time: sat shivering on an oak fence, a fence, I was told, as old as the railway itself, at the top of an embankment; bright sun, everything glistening white, so cold, half-expecting to be found later in the day as a frozen corpse; watching the platelayers checking and adjusting the gaps between the contracting rails, and when they’d gone waiting for the first signs of a train approaching, peering, almost transfixed, at a spot two miles distant on the edge of a wood; desperate for the giveaway sign of smoke. And then, if alone, the unspoken: There it is! It was best when the train approached at high speed, the engine rocking like a clockwork drunk, the exhaust at full blast with a perfect pulse, the piston and connecting rods a blur, about to disengage, fly off, and kill me, and the rapid clickety-clacking of wheels running over those rail joints. All of this motion and sound in glorious unison; perfect rhythm; the rhythm of a train, an inspiration for so many musicians and filmmakers.

Geoffrey Jones, the brilliant documentary film director and editor, produced what is, for me, one of the finest combinations of film and music. His Snow (1963) brought together film shot over nine days in locations across the country, and combined it with Teen Beat written by the jazz/rock drummer Sandy Nelson. Jones was unable to obtain clearance to use Nelson’s original recording so used an arrangement by British musicians. The new recording was edited then mixed to twice its original length, then reduced to half its original speed; it was then accelerated over a period of eight minutes to a speed twice that of the original. It was then re-recorded using various filters to give the dimensional quality required to match the picture. The result is astonishing:

I love the purity of Judy Collins’ voice, and it was through her album Judith (1977) that I discovered a song written by Steve Goodman describing a train journey from Chicago to New Orleans on the Illinois Central Railroad called The City of New Orleans. I thought it was good, but missing something, but what? Was it too pure? I went several years without discovering what it was, but then found Willie Nelson, and everything fell into place:

Sam Phillips, record producer and founder of the Memphis Recording Service and Sun Records, used to boast to his competitors that if he could find a young white singer who could sound and feel like a negro he would make a billion dollars. In 1954 Phillips discovered such a singer, but the most he made was $35,000 when he sold Elvis Presley’s recording contract and the Sun tapes to RCA Victor.  Those tapes revolutionised pop/rock music and showed a 19 year old Presley, supported by a superb guitarist, Scotty Moore, and a top bass player, Bill Black, as wonderfully intuitive and uninhibited.  The rhythm of the railroad cried out for an interpreter with these qualities. Here is Presley with Mystery Train:

Vivian Ellis, the English composer of light music, wrote a theme for the radio series Paul Temple, the tales of a fictional detective. It ran from the 1930s to the 1960s. The highlight of the programme, for me, was that theme music: The Coronation Scot. But, as Ellis states in the Intro, it wasn’t inspired by the Coronation Scot at all, but by a journey far less glamorous:

I’ve used the final piece once before on The Dabbler; it’s so good I include it here, without apology. The marriage of film, poetry and music, when featuring great artists, is so rare that when it occurs it has to be treasured, and the GPO film unit, working with Britten and Auden gave us in Night Mail one of the truly great short films. Everything seems to fit together perfectly:

13 thoughts on “Music to watch trains by”