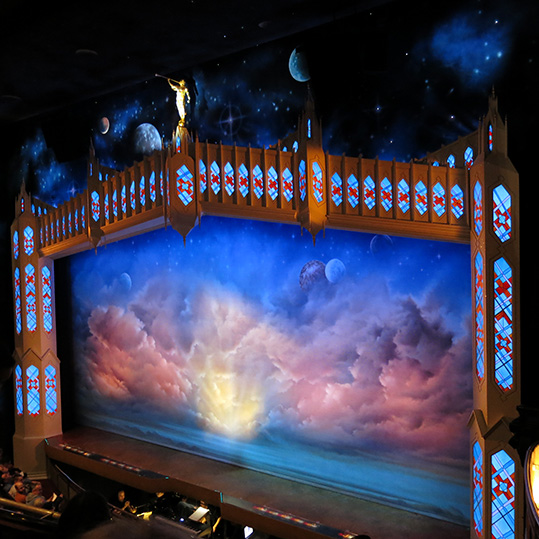 If my father were still alive, he would certainly have walked out after only a few minutes. After all, he banned me from watching Till Death Us Do Part and Steptoe and Son because of the swearing. Despite every other word being four lettered, The Book of Mormon has to be the most hilarious musical I’ve seen in years – at least since Jerry Springer: The Opera.

The stage backdrop (behind the dramatic curtain, above), pleasingly painted to form the torn pages of an antique book, is a work of art in itself. The cast perform dexterously choreographed dance routines and enunciate clearly enough for every profanity to be perfectly comprehensible.

And what comes across is not so much a satirical attack on Mormonism, as a questioning of all our belief systems/religions – chief among them the American  Dream. Generosity of human spirit and the value of friendship triumph over ideology in this production. It’s a showcase of the power of creativity too – the imagination of the individual, versus the stultifying effect of an authoritarian regime. If you haven’t already booked to see it, you should.

Are lots of babies born at this time of the year? For some reason I seem to have a surfeit of Piscean friends. One of them even holds an annual dinner that she calls the “birthday boys’ bash,” which has grown to a considerable size, and now includes several women as well as men with birthdays in early March. This means I have to rustle up gazillions of birthday presents. Some of them will invariably come from my stock of vintage accessories, but the other day whilst I was in Selfridges looking for a new suitcase, I thought I’d see what they had on offer, apart from socks. The prices were extraordinary: with the exception of ties at around £85 upwards, there didn’t seem to be many men’s gifts costing less than £150.  Even a silk pocket-handkerchief came in at around that mark. Meanwhile, Tom Ford’s £275 silk evening scarf was positively cheap compared to Burberry’s £1000 barely there creased-up looking cashmere number. I’m still in shock…

Having dug myself into a very deep hole, with last week’s post incurring the wrath of my mother, I was forced to make amends by way of a slap-up Mother’s Day lunch at a restaurant on her freezing cold side of the M25.  Going to Brocket Hall reminds me of my errant youth. After visiting the local pub on a Friday night, a group of us (in our late teens at the time) would play a variety of silly games. In the summer months, on moonlit nights, we’d visit a wheat field on the edge of the Brocket estate – long before any Ferraris were buried under Capability Brown’s gently undulating landscape. We would proceed to roll around on the ground, creating what some might call crop circles… though ours were more contemporary art. On other occasions, we played sardines in a local churchyard, hiding amongst eerie tombs and behind ancient gravestones. I doubt we would have chosen these pastimes had we been stone cold sober.

I’m currently working on a new blog with more of a magazine style format, and recently purchased webhosting from an outfit called Laughing Squid. Companies used to have self-explanatory names like Smith’s Engineering, British Rail and Amstrad Computers. These days corporations opt for irrelevant names like Yahoo! Blackberry, Apple – or choose meaningless words like Skype to describe their business. There’s even a creative naming service called Wordoid to help conjure up words that are purposely devoid of any meaning.

Perhaps Dabblers have some suggestions for the corporate names of the future?

And, in case you are feeling the urge to do something crazy, last week a friend sent me details of The Insanity Workout – a 60-day total body conditioning programme to provide the ultimate ripped body by ‘exercising in your own sweat.’ Think I’ll give this one a miss.

20 thoughts on “Birthdays, Blasphemy and Blogging”