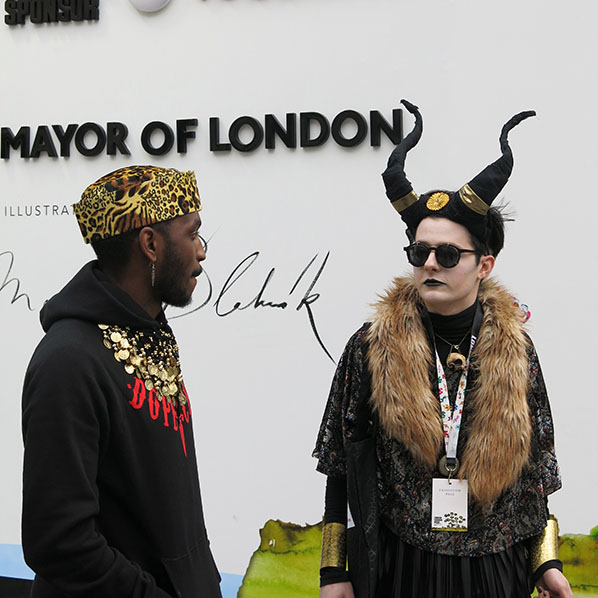 Perhaps you can help me? I am trying to think of a suitable caption for this photograph. Incidentally, the logo on the front of the man’s sweatshirt says ‘Dope Chef’. I love living in the swirling soup of global diversity that is cosmopolitan London. You really notice this at London Fashion Week, with its eclectic and intoxicating mix of designers and visitors.

I’ve also spotted that a lot more men seem to be attending London Fashion Week these days. Many of them look to be in their teens, and quite a few seem unsure of their gender. However, Dabblers may be interested to visit Grey Fox, the website of a chap I met who specializes in fashion and style for the older man.

I love London even more when the sun shines, but earlier in the week was a different story. Another snowy day, another trip to Paris. This time for the faceless side of fashion. A warehouse wilderness of several thousand screened-off stands masquerading as an international fabric fair.

This is where many fashion houses and designers choose their textiles for collections to come. Whilst we at Fashion Week in London, are buying made-up garments for a season hence – ie Autumn/Winter 2013, visitors to Premiere Vision order fabric a year in advance, for Spring/Summer 2014 – and trend forecasters offer suggestions for a season beyond that.

Meantime, security guards closely protect the fabric samples, lest anyone should dare to photograph, or throw food at them. Though everyone is allowed to touch. Ah, yes… the textiles community is very touchy-feely. NLP practitioners would place this group in the box of kinesthetic people. How are you feeling? Are you getting to grips with this concept now? Never mind, if you’re not, just hang in there and you’ll get a handle on it eventually.

By the way, trends are usually given names. ‘Voluptuous mutations’ was one of the more original. As I sat eating lunch opposite a morbidly obese man, whose face grew larger and redder as he drank his way through a bottle of red wine, I began to get a handle on where the organisers’ inspiration was coming from.

There was another encounter with BA too. Despite my appreciation of global diversity, here’s an admission: The reason I mainly fly British Airways is that I am reassured by the pilots’ voices. Nine times out of ten I feel at ease because the pilot sounds like Roger Moore. Only once have I been on a plane with a female pilot, which threw me a bit. And it’s okay if the pilot has a Scottish accent (so long as I can understand him) or – heaven forbid – is Welsh. But if the accent is Geordie, or too strong, or anything other than vaguely British sounding, then I begin to fear for my life. Why is that?

The provincial outpost that is Charles de Gaulle continues to dumbfound me. Lost in a maze of renovations, whilst the airport is converted into a (deserted) luxury shopping mall, I finally found the BA check-in desk. I’m not sure why I bothered, as I’d already checked in online. But when they scanned my boarding pass, it was deemed necessary to swipe my credit card.  Not just the one I paid with, but two others as well. There seemed to be something wrong with their system because none of them worked, so it was “okay anyway.” How did I feel about that? Not entirely okay.

11 thoughts on “Feeling, flying and fashion”