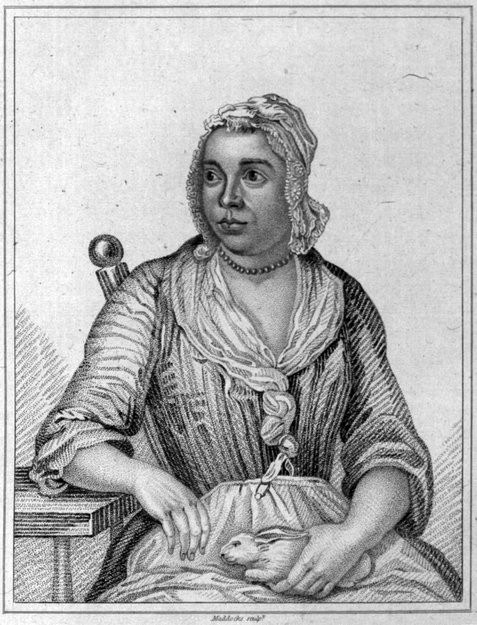 In the summer of 1726 a Surrey surgeon named John Howard was summoned to the bedside of Mary Toft, who had apparently suffered a miscarriage as she worked out in the fields. A contemporary account relates that on arrival the doctor delivered

Three legs of a Cat of a Tabby Colour, and one leg of a Rabbet: the guts were as a Cat’s and in them were three pieces of the Back-Bone of an Eel … The cat’s feet supposed were formed in her imagination from a cat she was fond of that slept on the bed at night.

Toft also feverishly told the doctor that she had seen a rabbit in a field immediately prior to the miscarriage. She remained ill and produced a few more grisly objects over the next few days.

Howard had Toft moved to a hospital at Guildford, where he regaled all and sundry with the amazing event, along with the offer to show his patient delivering more pieces of rabbit, should anyone doubt the story. One of the many letters he sent out that week came to the attention of Nathaniel St André, a surgeon to the incumbent King George I, who passed on the bizarre news to the King.

Fascinated by these reports, the King then sent another of his trusted surgeons to Guildford. When he arrived he found Toft exhibiting no signs of pregnancy. Convinced the affair was a hoax, the surgeon made his excuses and returned to London, taking specimens of the rabbits with him.

This story came to being just as newspapers were first beginning to gain in popularity in Britain, and was one of the firest genuine media scandals. Although some newspapers remained sceptical from the outset, there were nevertheless plenty of publications and pamphlets around the country that enthusiastically trumpeted the unusual story of the woman who had given birth to rabbits, and as a result rabbit stew and jugged hare disappeared overnight from dinner tables the length and breadth of Britain.

Under St. André’s strict control Toft was studied by a number of eminent physicians and surgeons, including John Maubray. (In his treaties The Female Physician Maubray had proposed women could give birth to a creature he named a Sooterkin.)

A sooterkin is a fabled small creature about the size of a mouse that certain women were believed to have been capable of giving birth to. The origin of this initially jocular fantasy lies in the 18th century, and came to be considered factual by some eminent physicians of the day. It is attributedto a tendency of Dutch women to frequently sit on stoves or use them under their petticoats to keep warm, hence causing the breeding of a small kind of animal, which when mature would be born.

Maubray was an advocate for maternal impression, a widely held belief that conception and pregnancy could be influenced by what the pregnant mother dreamt of, or saw. Maubray warned pregnant women that over-familiarity with household pets could cause their children to resemble those animals.

The hoax was uncovered on 4 December, when it was discovered that for the past month Toft’s husband, Joshua, had been buying a large amount of young rabbits. The same day a porter at the hospital confessed to sneaking a rabbit into Toft’s chamber.

After several days of examinations and questioning, Toft was threatened with having a painful operation performed on her, and finally confessed. It transpired that following her (genuine) miscarriage and while her cervix permitted access, an accomplice had inserted into her womb the claws and body of a cat, and the head of a rabbit. They had also invented a story in which Toft claimed that during her pregnancy and while working in a field, she had been startled by a rabbit, and had since become obsessed with rabbits.

Imprisoned, she blamed the entire affair on a range of other participants, from her mother-in-law to the surgeon John Howard. She also claimed that a gypsy had told her how to insert the rabbits into her body, and how such a scheme would ensure that she would “never want as long as I liv’d”.

Crowds reportedly mobbed her jail for months, hoping to catch a glimpse of the now infamous Toft. She was ultimately discharged as it was unclear as to what charge should have been made against her. The Toft family made no profit from the affair, and Mary returned to obscurity in Surrey. Following the hoax the medical profession’s gullibility became the target of a great deal of public mockery and took many years to recover its reputation. 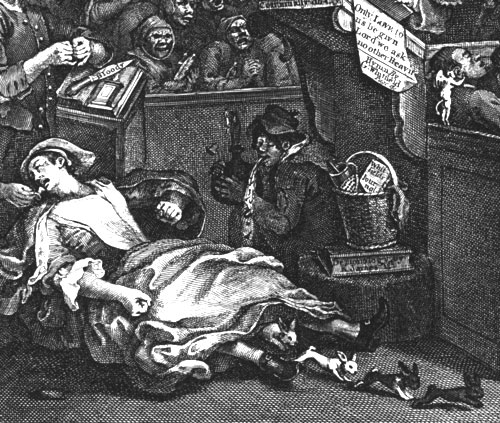 7 thoughts on “Mary Toft: The Woman Who Gave Birth to Rabbits”