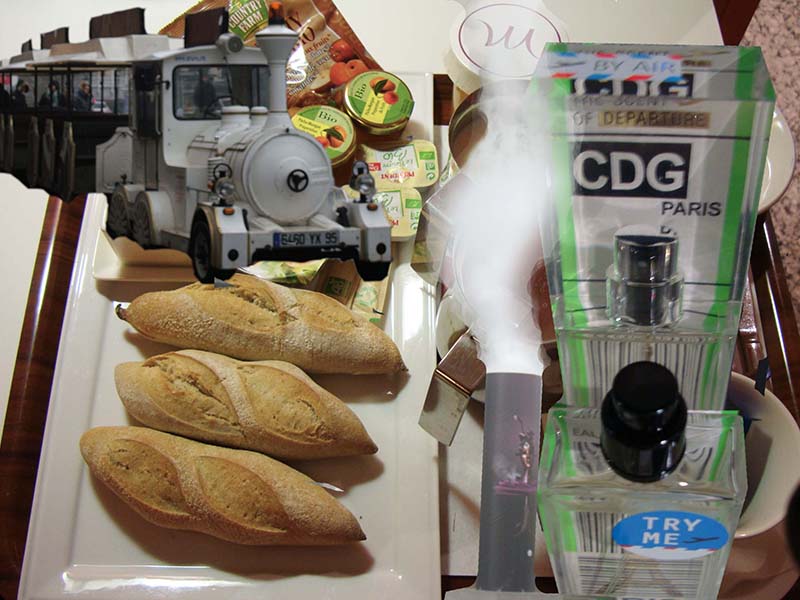 This week Susan has been battling the snow, a cold, and the French – but all in her usual stylish way…

“If Britain leaves the European Union, the other members will be cheering,” whispered Lolo in her throaty southern French tones.  We were at the launch party for a new Zumba academy. I’d trudged through the snow wearing an iridescent ‘70s style catsuit under my winter coat to join the celebrations. The hard work and genuine charm of an enterprising Colombian couple have really paid off – they’ve effectively created a local community centre, the model for which could be rolled out the world over.  Its name, Maloca, is that of an ancestral long house used by the Amazonians of Colombia and Brazil, where several families gather to celebrate life.

By this time my cold was already a stinker. It didn’t help that, having eventually got to bed at two in the morning, I had to get up at four thirty to catch a plane to Paris. At the airport I met a French orthopedic surgeon on his way back from New York. He’d been waiting for two days for a flight. “I love your British Airways,” he enthused, “they have an excellent business model.” He seemed happy enough to have been put up in a decent hotel for two nights, with three meals a day paid for by BA, whilst his patients waited… However, having finally got a place on a flight, this also was delayed.  I told him of my concerns about traversing Paris by rail later in the day. He warned me to steer clear of commuter trains to the south of the city after 8 pm. Meantime, my deodorant and body lotion were confiscated at customs and thrown away. What a waste.

Arriving at a deserted Charles de Gaulle airport, surrounded by piles of snow and two and a half hours later than expected, I began to wonder if my decision to travel might have been flawed.  The Maison et Objet trade show was the quietest I have ever experienced – and not just because my flying-with-cold formula had left me completely deaf in one ear. Afterwards, the RER regional trains were also affected by the weather – but having finally found a seat, I relaxed back to marvel at the sea of white outside. At the first stop three swarthy, hooded youths boarded the train and pushed briskly past standing passengers. They wrenched open the door to the next carriage and piled through. A shady figure (also hooded) shuffled behind them, and took a perch on the corner of a seat diagonally facing mine.

The young man, his face lined with dirt and the worn out look of a fairground worker, sat astride a ‘bag for life’ that I presumed to contain his worldly possessions. The African girl sitting next to him froze as he fidgeted agitatedly and clicked what sounded like the blade of a knife. I looked at her as she rolled her eyes, and took out a book, immersing her face between its covers.  I was curious about the clicking sound, so cast a glance in the direction of the ragged youth. He smiled at me. I smiled back. Oh God, what had I done? I turned away and felt his menacing stare boring into my being. My body temperature rose to near boiling point, as stop after stop the train emptied, but the bag boy remained in situ. He was surely going to follow me off the train and slit my throat with his knife.  A gypsy woman, with child in tow, begged for money as she disembarked. Bag boy was the only one to offer up coins from a noticeably shaking hand. Then, at the stop before mine he suddenly jumped from his seat and fled through the open door, leaving a cloud of smoke behind him. It was then I realized that the clicking sound had been his repeated pressing on a lighter.

The remainder of my journey – a half hour tram ride, followed by a twenty minute walk, dragging a suitcase through a snowstorm with raging ‘flu, seemed uneventful by comparison.  I was even amused rather than irritated by the ridiculous electronic jingles that have been individually composed by Rodolphe Burger to announce each tram stop.

My hotel room at a newish Mercure, with signature orange and mauve patterned carpets, wasn’t so bad. The ingeniously designed space lacked nothing except a bath and, on this occasion, a choice of more than one wine. But my half bottle of 2009 Crozes-Hermitage (just 10 Euros) was almost certainly more effective than Sudafed at securing a good night’s sleep.

Despite the appearance of being stage-managed by Danny Boyle, the second trade fair on my list was quieter than usual too. And bag boy was instantly turned into an unlikely fashion icon by a Dickensian style ‘steampunk’ fashion show.

When I received an email informing of Eurostar cancellations (I don’t suppose steam trains were ever affected by snow?), I thought I’d better make my way home as soon as possible.  If looks of consternation are anything to go by, rail passengers aren’t nearly so accommodating to people with fits of sneezing and chesty coughs as those travelling by air.

A couple of days later, I braved the weather again, driving out to the Buckinghamshire village of Latimer to attend a funeral. The scene was a veritable winter wonderland. My friend Max’s father had been a real character – a true English eccentric and the product of a bygone era. It wasn’t important that he couldn’t master a remote control, or that he didn’t have the latest mobile phone… he was the sort of chap for whom what mattered most was simply being a ‘good egg.’

And my dabblings with the French weren’t over. A dinner at La Petite Maison followed.  At least we know how to do Mediterranean cuisine properly, even it does come in tapas sized portions, priced for Russian oligarchs. Go here for a taste of internationally-inflated (i.e. super-skinny) London – and delicious espresso martinis.

Coincidentally, the following night, we took some French and Luxembourgish friends to a Brazilian-Japanese fusion restaurant called Sushinho, which I can thoroughly recommend.  “Wouldn’t it be so great if Britain left the European Union?” said Claude. It seems this move would be universally admired – especially by the French. Oh, and a cabbie from Calabria who bemoaned the coming of hordes of Bulgarian and Romanian immigrants in 2014. But he’d soon be going back to Calabria to spend the rest of his days fishing.

8 thoughts on “Hard Times in France”