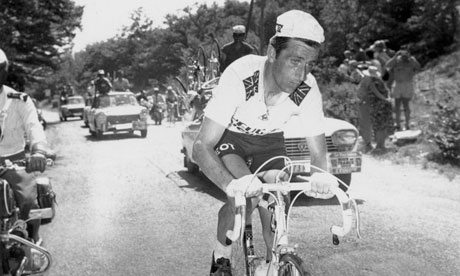 Lance Armstrong’s Oprah confessional has put cycling on  the front pages again for all the wrong reasons. But he’s hardly the first rider to come to a bad end. Death, drugs, sex and madness –  here are three cautionary tales from cycling’s rogues gallery…

Dubbed ‘Major Tom’ by the French press, Simpson (above) was the first British rider to wear the yellow jersey, and won the world championship in 1965. The son of a Durham miner, he played the part of the English gent with relish when on the other side of the Channel, dressing up in a bowler hat and suit, complete with rolled umbrella, for the benefit of French reporters. One of the era’s most respected riders, he finished sixth in the 1962 Tour and also won the Milan-San Remo, Paris-Nice, and Bordeaux-Paris races – the latter a hellish 350-mile non-stop slog which began at 2:00am, lasted about 15 hours before reaching the capital, and included long stretches of motor-pacing behind miniature motorbikes known as “dernies”.

But how did Simpson maintain the pace in an era when doping was rife in the peloton? That became hideously apparent during the 1967 Tour when he keeled over and died on his bike in furnace-like heat near the top of Mont Ventoux. Doctors found amphetamines in his system and team-mates recalled how he had been drinking brandy – snatched during one of the ‘cafe raids’ which riders depended on for sustenance – before the climb. Such was the diet of champions in an era now fondly remembered as a cycling golden age. The spot where Simpson died is now the site of a granite memorial, piled high with water bottles, tyres, and cotton cycling caps left in tribute by passing riders. 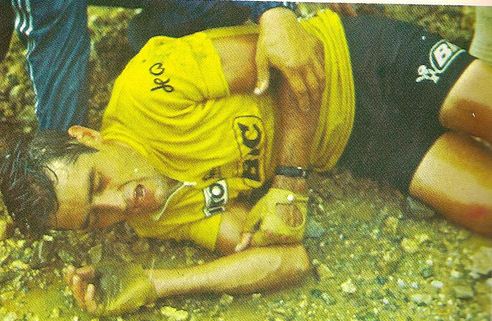 Fated to belong to the same generation as Eddy ‘The Cannibal’ Merckx, Ocana’s life story perfectly epitomises the old blues line – if it wasn’t for bad luck, he wouldn’t have no luck at all. Born dirt-poor in central Spain, Ocana’s family moved to France when he was just six – and he later raced over the same Pyrenean passes his father had trudged over in search of work. Ocana’s rivalry, perhaps obsession, with Merckx was so all-consuming that he named his dog after the taciturn Belgian. “Obey, Merckx, I’m your master, your boss,” he would tell the hound. But when Ocana had his best chance to beat Merckx, in the 1971 Tour, disaster struck. With Ocana in yellow, seven minutes ahead, Merckx attacked on a treacherous Pyrenean descent and crashed into a wall. Ocana tried to avoid the Belgian but crashed himself.

But while Merckx recovered and rode off, Ocana was hit broadside by another skidding rider and left screaming in agony by the side of the rain-drenched road (see picture above). Ocana ended up in hospital, Eddy in yellow – again. Ocana won the Tour for himself, in 1973, but Merkcx wasn’t riding that year. On retirement, Ocana struggled to start his own vineyard business, was diagnosed with Hepatitis C, and took his own life by shooting himself in May 1994. Some of his ashes were supposedly dissolved in whisky and drunk by a prostitute in a Madrid bordello. “One thing that he did beat Merckx on, well, two in fact, were whores and drinking,” his friend Juan Hortelano recently told Rouleur magazine.  Unfortunately they don’t give out yellow jerseys for that. 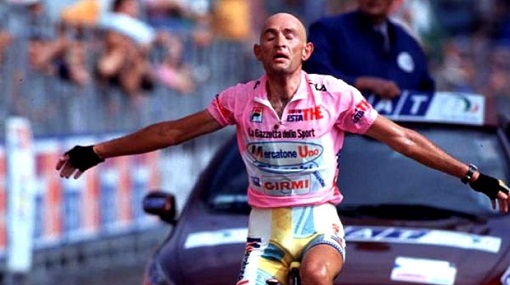 Sporting a shaved head, bandanna and ear-ring and going by the nom de guerre of ‘The Pirate’ – or alternatively ‘Elefantino’, for his outsized ears – Marco Pantani cut a suitably garish figure in the day-glo world of 90s cycling. The last rider to win the Tour and the Giro d’Italia in the same year, the Italian’s style was based on sudden, dramatic accelerations in the mountains, throwing races into chaos with attacks which were sometimes signaled by his flinging his bandanna to the ground in a gesture of simultaneous contempt and disgust. With the other riders, or with himself? Pantani’s Tour win, in 1998, came against the background of the ‘Festina affair’, when the race descended into farce following the expulsion of the eponymous team, whose soigneur had been arrested with a car full of steroids and EPO.

Pantani claimed the Tour may have been the cleanest ever, because of the fear of the police after the Festina raids. But the truth seems to have been revealed the following year, when Pantani was expelled from the Giro while in the leader’s pink jersey for an excessive hematocrit reading – taken to be an indicator of EPO use.

A comeback in 2000 saw him dueling Lance Armstrong on Mont Ventoux, before pulling out with stomach problems. That was his last Tour appearance. The final years were marked by a ‘my cocaine and hookers hell’-style descent into madness. Pantani had plastic surgery to pin back his ears, and was found dead in a cocaine-strewn Rimini hotel room in 2004. So ended the long, lonely road of a man Armstrong once said was more like Salvador Dali than a conventional bike rider. He still holds the record for the fastest ascent of the Tour’s iconic Alpe D’Huez climb.