Continuing our serialisation of the new handbook – The Theory and Practice of  Blogmanship – or How To Win Arguments On The Internet Without Really Knowing What You Are Talking About (available as an eBook from Amazon or as a PDF here.)

In this second extract, Noseybonk moves on to the practical tricks of the Blogman’s trade…

Book recommendmanship
The successful blogman need not have read any important books pertinent to the topic at hand. Indeed, he need not have ever opened a tome more advanced than Asterix and the Big Fight since school. Nonetheless, with a firm grasp of the fundamentals of bookrecommendplay he will be able to intimidate and befuddle any internet opponent into submission and despair.

In essence, the three golden rules of recommendmanship are:

Had he actually read these books? It scarcely matters, for who could help but applaud a gambit such as this classic from 2005:

LAYMAN: Of course the vast majority of Muslims dislike extremism as much as we do.

KNOTT-EAGAR: Try taking a look at Hashem Ahmadzadeh’s second book on Kurdistan before re-reading the Koran next time, and say that again with a straight face.

Note the expert employment of the golden rules. The mentioned book is obscure (an academic work that may not, in fact even exist at all); it is vague – there is no clear sense of what, if anything, the book says or why it might be relevant to the argument; and the manner of ‘recommending’ is aggressive: suggesting that unless one is familiar with the work, and probably those surrounding it, one is no more qualified to speak on the subject than is the most ignorant child.

THE BLOGMAN NEVER READS A BOOK BUT THAT HE REREADS IT.

This especially applies to books that one’s opponent might have actually heard of, such as important philosophical works. “Yes, I used to think that too, until the second time I reread Spinoza’s Tractatus. Took me until then to realise that the orthodoxy had it all the wrong way about, so you’re not alone” is solid condescension-play incorporating recommendmanship. 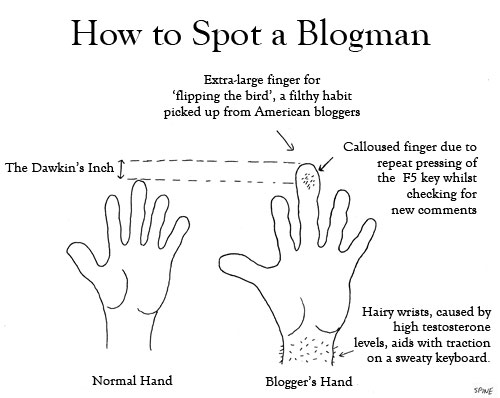 Linkmanship
Most blogmen have traditionally seen linkmanship as a sub-category of book recommendmanship, but there is a growing school of thought that holds that linkplay is a serious branch of blogmanship and worthy of a complete literature in and of itself.

I confess I fall between these two stools. For further reading I always refer students to Dr D B C Cohen’s groundbreaking work in the field I Suggest You Take a Look at This: Linkcraft and its uses in the Furtherment of Blogmanship (2008, UMASS Press) – especially pp788-945 inclusive, and all of Appendix Six*. But for now it is probably sufficient for the novice blogman to consider the following guidelines:

a)    Link big, link broad. It rarely pays to link to a specific quote, study or fact. This opens up the possibility of actually being refuted. Much better to link to something which the layman cannot possibly read in one sitting, such as a dense, 300-page PDF from an obscure Institute. Unexplained graphs are also good.

b)    Link smart. Do not merely display your link in the form of a lengthy web address. Instead, embed it in suitably witty hypertext. This will bring Condescension into play and, with a fair wind, can even act as a Stopper.

Dr Cohen became one of the first blogmen to win international recognition for linkmanship when he posted a comment about the relative importance of carbon emissions on fluctuations in Arctic temperatures which simply said:

“I refute it thus”

in which each of the words “I”, “refute” “it” and “thus” were links to different, impossibly arcane research papers.

Logicship
There are those blogmen who put the use of logicship right at the top of the tree, and doubtless I’ll be receiving some pretty stiff correspondence for failing to even mention it until the end of Chapter III of this guide.

Be that as it may, my firm opinion is that the novice blogman should approach logicship with caution. Done well, it is the peak of the blogman’s craft, and connoisseurs will discuss little else at Blogmanship gatherings. Done badly, and it can land you in hot water.

The general idea of logicship is that you should incubate in your opponent the uneasy sense that he has committed a gross logical blunder.

JJ Burnet-Guinn, for many the ‘Godfather’ of Logicship, has written exhaustively on the subject and concludes that there are only three main logicship ploys, of which all other ploys are really subploys. They are:

Needless to say, the blogman never makes it too precisely clear exactly why any of these accusations applies.

Beware the standard counter, however:

BLOGMAN: Uh oh. Passionately argued, old boy, but you can’t have your cake and eat it, you know. Bit of a logical slip-up there.
COUNTER-BLOGMAN: Ooh bad luck, my friend.** Looks like another of your category errors.

Category-errorcraft is of course a whole volume unto itself.

Aeschlup’s Fallacy
Elite blogmen have been known to simply invent a logical fallacy, give it a classical-sounding name and then accuse their opponent of making it. The textbook example is this from RBD Duquette (Duquette versus Meislin, on the subject ‘Can Ethics Exist in a Godless Universe?’, 2004)

MEISLIN: Unless we posit a God to determine good and evil then the concept of sin is empty, and there is no objective standard for determining why, for example, murder is wrong.
DUQUETTE: Ah, our old friend Aeschlup’s Fallacy, I wondered when you’d raise your unsightly head. Look it up sometime.

With its easy condescensionship, the made-up logical fallacy, the variation on Montgomerie’s Meta-Stopper (“I wondered when someone was going to say that” becomes, brilliantly, “I wondered when you’d raise your unsightly head”) and the expert use of linkmanship (the word ‘sometime’ was simply a link to an Amazon page for The Collected Dialogues of Plato), it is no wonder that Duquette’s Gambit has been described by more than one distinguished judge as:

*Dr Cohen has also contributed to a more accessible introduction to the field of linkmanship, entitled: The Thin Blue Underline – How HyperLinks can Annihilate Your Opponents To Death (Pan McMillian 2010), though for myself the self-consciously informal style and frequent Americanisms are a little grating.

COMING UP TOMORROW: in part 3 of our exclusive serialisation, Noseybonk looks at Specialrelationshipmanship – or, how Americans and Britons can annoy each other…