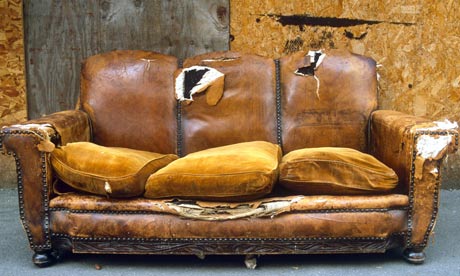 How far can you travel on a sofa?

I’ve been working on and off for a number of years in the world of sofas, God forgive me. So I was surprised I hadn’t heard of the “sofa poem by Seamus Heaney” that a colleague referred to the other day. She was making a point about a good sofa being almost one of the family, the poem illustrating this.

I suspect the sofa has become more central now we’re all spending so much time looking at screens of one sort or another – why not do so when sitting in comfort? Conversely, the kitchen table isn’t what it was, or so the stats on dining habits tell us. It’s no longer the place where the family is most likely to gather regularly.

Nostalgia for the days when life revolved around the meal table is easy to come across. Not so long ago I was reading how Tony Judt recalled his formative family encounters:

I was raised on words. They tumbled off the kitchen table onto the floor where I sat: grandfather, uncles, and refugees flung Russian, Polish, Yiddish, French, and what passed for English at one another in a competitive cascade of assertion and interrogation.

Heaney grew up on a farm, a place where the kitchen table is often not just the place you eat but also the office and board room. A lively place of business where farm workers as well as tradesmen and neighbours might settle down for cups of endless tea, or even a fried breakfast after a couple of hours of early morning work.

Can a sofa provide these levels of sociability? Surely, only in virtual form – you should know it’s where I’m writing this. But add a child’s hungry imagination and some input from the outside world – the radio in the ’40s of the poem, perhaps an iPad now – and a sofa, just like Judt’s kitchen table, is capable of transporting you to distant places. For Heaney, it offers up a first dramatic encounter with ‘history and ignorance’, a dialectic that seems to have driven a life of discovery.

A SOFA IN THE FORTIES

All of us on the sofa in a line, kneeling
Behind each other, eldest down to youngest.
Elbows going like pistons, for this was a train

And between the jamb-wall and the bedroom door
Our speed and distance were inestimable.
First we shunted, then we whistled, then

Moved faster, chooka-chook, the sofa legs
Went giddy and the unreachable ones
Far out on the kitchen floor began to wave.

Ghost-train? Death-gondola? The carved, curved ends,
Black leatherette and ornate gauntness of it
Made it seem the sofa had achieved

Flotation. Its castors on tiptoe,
Its braid and fluent backboard gave it airs
Of superannuated pageantry:

When visitors endured it, straight-backed,
When it stood off in its own remoteness,
When the insufficient toys appeared on it

On Christmas mornings, it held out as itself,
Potentially heavenbound, earthbound for sure,
Among things that might add up or let you down.

We entered history and ignorance
Under the wireless shelf. Yippee-i-ay,
Sang “The Riders of the Range.” HERE IS THE NEWS,

Said the absolute speaker. Between him and us
A great gulf was fixed where pronunciation
Reigned tyrannically. The aerial wire

Swept from a treetop down in through a hole
Bored in the window frame. When it moved in wind,
The sway of language and its furtherings

Swept and swayed in us like nets in water
Or the abstract, lonely curve of distant trains
As we entered history and ignorance.

We occupied our seats with all our might,
Fit for the uncomfortableness.
Constancy was its own reward already.

Out in front, on the big upholstered arm,
Somebody craned to the side, driver or
Fireman, wiping his dry brow with the air

Of one who had run the gauntlet. We were
The last thing on his mind, it seemed; we sensed
A tunnel coming up where we’d pour through

Like unlit carriages through fields at night,
Our only job to sit, eyes straight ahead,
And be transported and make engine noise.

9 thoughts on “Sofas vs Tables”