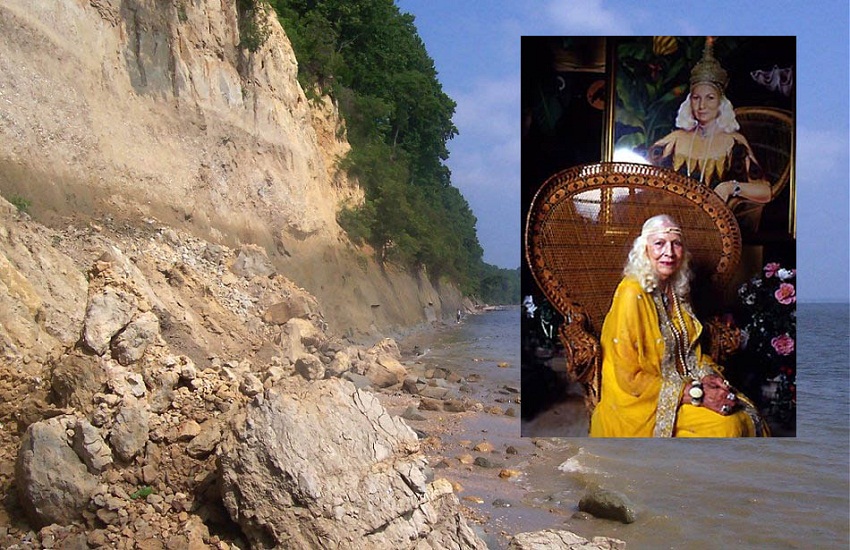 Thanksgiving was a busy time chez Tull as members of the far-flung Byrne clan flew in from London and San Francisco.  We gave thanks for the end of the political season (our side won) but kept our glee in check in case any members of the opposition had infiltrated the assembly.  We continue our Flemish great-grandmother’s tradition of banning talk of politics and religion at the dinner table – the Flemish being a people highly disposed to passionate dispute (they even have trouble forming a government). With the election over, the disputatious talk of Washington is all about the so-called “fiscal cliff,” an entirely artificial construct of the Congress, created especially to give themselves something to posture and fight over.  But we decided to flee the concerns of Washington and the mad Christmas shopping stampede known as Black Friday to visit an actual cliff: Calvert Cliffs in Southern Maryland on the western shore of the Chesapeake Bay. Less than two hours drive from Washington you enter an ancient world of dead sea creatures presided over by the modern behemoth of the Calvert Cliffs Nuclear Power Plant.

Ten to twenty million years ago during the Miocene era (warning: Science! stop reading now if you are a creationist) a warm sea covered the whole of Southern Maryland.  As the sea receded it left behind thick layers of sediment, which gradually eroded into the massive cliffs we see today.  The cliffs and the beach below are loaded with fossils, so many that any casual visitor scooping up a handful of sand can expect to find a shark’s tooth or the remains of over 600 species of ancient creatures.  We hiked to the cliffs by a two mile trail through woods and marshland, my two little grandsons hitching rides on their big cousins’ shoulders, their baby brother asleep in a kangaroo pouch.  It was near high tide when we reached the beach, just a narrow strip of sand, rocks, and tidal pools but a vast world of adventure for little boys.  Squatting on fallen tree trunks we enjoyed a picnic of Thanksgiving leftovers before beginning our fossil hunt.  All around us danger signs warned of landslides and prohibited visitors from climbing or digging for fossils immediately below the cliffs.  I recalled that on my last visit during the 1990’s we were free to climb the cliffs and even dig fossils right out of the cliff face.

The thought revived another memory of a different kind of Chesapeake fossil we encountered on that former trip.  My husband and I were hungry after a day of hiking so we took a chance on a garish neon sign by the highway advertising Vera’s White Sands Beach Club and Marina.  Flashing palm trees and pink flamingos were an unlikely sight in Southern Maryland but curiosity drove us down the winding road through a nondescript residential neighborhood.  We turned the last bend and there was Vera’s in all its tacky, faded glory.  A would-be tropical paradise on the Chesapeake.  The cinder-block building was painted bright pink, the color still intense though the paint was peeling.  The outdoor décor, you could hardly call it gardens, was a forest of fake palm trees, pink flamingos, statues of Neptune and other vaguely classical figures, all lit up with strings of multi-colored flashing lights.  The display sloped down to the water where the marina had an abandoned air.  No boats were tied to the rotting moorings, the half-sunken jetties.  Fairy lights twinkling over the water gave a romantic aura of lost grandeur to the scene.

The effect continued inside the building where we sat at the Tiki Bar.  The whole place was done up in what must have been cutting edge style back in 1960 when Vera’s opened, but had obviously never been updated since.  The bar stools were covered with fake leopard skin, threadbare and torn in places.  The bar itself was crammed to the ceiling with mementos of Vera’s world travels, from exotic carvings to cheap souvenirs to dubious specimens of taxidermy.  Around the dining room more “classical” statues were scattered as well as an Easter Island head and a gushing fountain, all lit up with more of those flashing lights.  There was nowhere for the eye to rest, except perhaps on the coiled snake at the end of the bar – could I be sure it was fake?  The bartender announced that Vera would soon make her nightly appearance to greet the guests…

To say that she made a grand entrance would be to seriously understate the electrifying effect of seeing Vera in the flesh.  An aged old crone caked in heavy make-up of the kind one associates with Queen Elizabeth I’s later years, her peroxide blonde hair curled in elaborate tresses, she wore long, flowing robes of a vaguely mystical kind and opened her arms in benediction to her awestruck public.  Suddenly the whole strange ambiance of Vera’s made perfect sense.  Vera was a living fossil of 1950’s glamor, a little bit of old Hollywood right here in Maryland.  After all, she started out as a Hollywood starlet before being enticed away from tinsel town by an optometrist.  Settling into a throne-like chair at the end of the bar she brandished a long, elegant cigarette holder towards the bartender.  He jumped to attention and struck a match with the air of an acolyte tending to a votive candle.  Vera seemed to issue orders with the smallest gestures.  Soon the bartender was passing round a tray of Ritz crackers topped with thin smears of caviar, complimentary from our hostess.  She eschewed food, sipping from a constantly replenished martini glass with a practiced hand.  For Vera this was just one more glamorous evening at White Sands; for us it was a once-in-a-lifetime surrealistic interlude.

Now, after the long trek back from Calvert Cliffs to the parking lot, my visiting family was eager to experience an authentic Maryland crab feast.  Did Vera’s still exist, I wondered?  Surely by now the old lady was dead, but perhaps her dream lived on.  Sure enough, quick searches on our dueling electronic devices revealed that Vera’s was open under new ownership and could serve up steamed crabs.  Soon the flashing lights at the end of the winding road signaled that we were at Vera’s once more.  But it was not quite the same.  The lighted palm trees and statuary were still there, but for some reason the new owners had banished the flamingos.  The building was no longer pink, but looked even more garish with a tropical mural and billboards advertising the menu painted all over it.  On the plus side, boats were moored in the restored marina.  Posters in the lobby advertised special events including a Winter Bikini Contest and bands with names like Hot Tub Limo.  Not exactly the Hollywood glamor of Vera’s day.  Inside, the Tiki Bar still featured leopard skin stools but they were obviously new.  The dead snake was gone.  An effort had been made to update the dining room but there were still a lot of flashing lights – this time on a virtual forest of Christmas trees.

Our London visitors were a bit nonplussed by the rituals of a Maryland crab feast.  First the waitress (I doubt Vera would have approved of her ripped off-the-shoulder T-shirt) unrolled a sheet of brown paper over the table and placed several large buckets at strategic intervals.  When the trays of crabs arrived one Londoner asked plaintively “Oh, we don’t get plates?”  The reason was clear once the method of getting any food out of a crab was explained and demonstrated.  No dinnerware could survive the battering.  And why do we call it a feast when the amount of actual food is so out of proportion to the effort expended to get at it, and so much less than the bucketsful of debris that must be hauled away from the table?

In his latest Dabbler post Frank Key, who is a member of the Byrne clan in his spare time, recounts the whole ghastly business from a Hooting Yard perspective.  Inexplicably, once he had tired of crab bashing, Mr. Key rose to give a demonstration of Morris dancing.  No one in the dining room batted an eye.  After all, Vera’s has been witness to much stranger sights over the years, beginning with the inimitable Vera herself.  May she rest in peace, along with the other fossils of Calvert Cliffs.

3 thoughts on “Fossils of the Chesapeake”