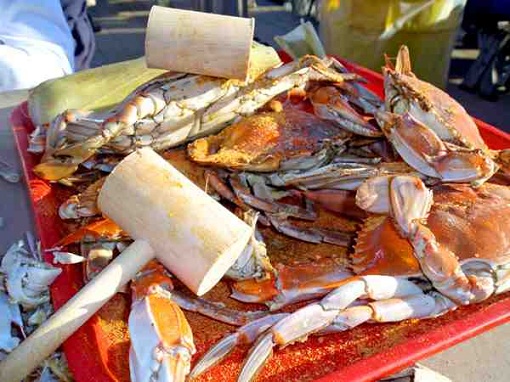 I am not an unadventurous diner, and have tucked in to many exotic dishes over the years. This was the first time, however, that I found myself having to use a wooden hammer to smash my way to my food. It did make me wonder in what a piteous starveling state the first person who ever ate a crab must have been. Weren’t there any fish in the bay that might have made for an easier dinner? Still, I suppose the primitive crabber would have found a rudimentary hammer lying about somewhere, not unlike the one I was given, which was in truth a mere stumpy cylindrical block of wood like a baton. Bear that in mind, it proves pertinent.

Perhaps I made a mistake when, on plucking my first crab from the heap, I turned its face towards me and gazed for a few moments into its wide-set dead eyes. I shuddered a Lovecraftian shudder. Indeed there was something about the entire scene that made me wonder if I had wandered into H. P. Lovecraft’s benighted and eerie fictional fishing village of Innsmouth. Then I turned the crab upside down and looked with further shuddering at the lineaments and integuments of an alien monster. Let the smashing begin!

I thumped my hammer or baton down upon the shell, and heard it crack. After several further thumps I gained enough purchase to wrench it apart and lay open the innards. Success, I thought. But no. It was pointed out to me that none of the soft bits now visible were edible. All these had to be ripped away and tossed into a large bucket along with the shell fragments. What meat there was I had to winkle out of nooks and crannies as best I could. It is worth noting here that the typical Chesapeake Bay crab is fairly small as crabs go, about the size of the palm of my hand.

Several smashed crabs later I was exhausted. I had eaten roughly the amount I would imagine would form a square meal for a sparrow. I looked at my baton, and wondered what other uses it might be put to. The conversation had turned to rustic pursuits, and it occurred to me that, stumpy as it was, the baton could serve as a Morris dancer’s stick.

“What”, asked the Americans at the table, “is Morris dancing?”

“Allow me to demonstrate,” I said, brightly. And so, joined by my sister-in-law, who knows about these things, we gave an impromptu demonstration – without bells, of course, and humming our own music, and shouting, and bashing our sticks together. Other diners gawped, awestruck, and, I hope, impressed. Nobody called the emergency services. Seldom, if ever, can Vera’s Beach Club & Restaurant have witnessed such revels. I think Lovecraft would have approved.

8 thoughts on “What I Did On My Holidays”