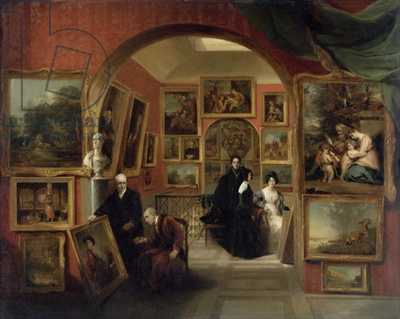 Last month’s Dabbler Book Choice was Ian McEwan tricksy new spy story Sweet Tooth. Here’s Brit’s review. To be in with a chance of getting your hands on future giveaways, sign up to the Dabbler Book Club today!

Pictured above is The Interior of the British Institution Gallery, a painting of paintings within a painting. It was created by John Scarlett Davis in 1892, thus proving that postmodernism began a lot earlier than is generally realised. It’s tricksy, it’s clever, it’s fun…but is it art? We can ask the same question of Ian McEwan’s new novel Sweet Tooth. This is a post-post-postmodern spy yarn, the ending of which doesn’t just pull the rug out from under the reader’s feet, it pulls the carpet, the underlay and the floorboards too. It will amaze you or annoy you or, most likely, do both.

McEwan’s 1970s London spyworld is the crappy tea-and-biscuits John Le Carre kind, rather than the glamour-and-gadget kind. Cambridge graduate Serena is recruited by MI5 to play a miniscule role in an unimportant part of the cultural Cold War. Her mission is simple enough: to encourage a young, supposedly pro-West author called Tom Haley to accept funding to write full-time. He thinks the money is coming from an innocent literary foundation; in fact MI5 are the ultimate source of the cash – they hope he’ll write famous anti-Soviet works to provide balance in the otherwise commie-friendly literary scene. McEwan’s paintings within paintings are Tom’s short stories, all of which are rather brilliant and, as it turns out, their cunning, memorable plots presage the novel’s big deception.

Inevitably, Serena and Tom fall in love. There are twists, there are turns, there are parodies and clues. Martin Amis even makes a fleeting appearance as a character, much less annoyingly than in his own books. But so much of this novel’s worth depends on the bravura final chapter that Sweet Tooth borders on the shaggy dog story. There is no doubt that McEwan has mastered his craft: his prose is unshowy and perfectly pitched. His two best books – Atonement and On Chesil Beach ­- have both come in middle-age; but those works had something to say. He seems to have written Sweet Tooth just because he can. So don’t expect to be taught anything profound by Sweet Tooth, but do expect to be entertained and ultimately dazzled. If you’ve got a soft spot for conjuring tricks, or Escher drawings, or paintings within paintings, then Sweet Tooth won’t disappoint. 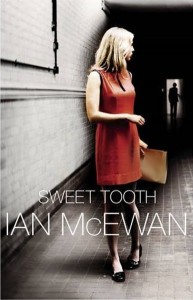