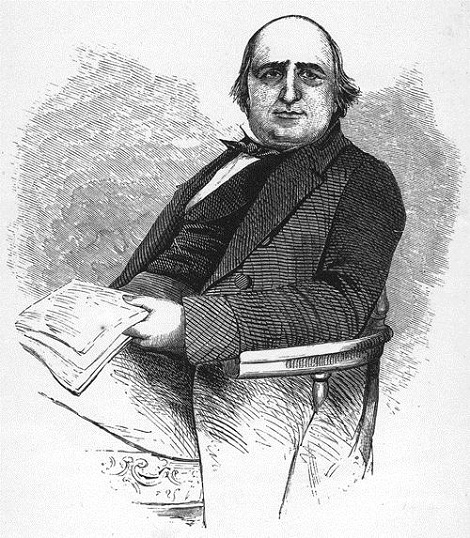 The lexicographer records the vocabulary of slang, but, unless their dictionaries also  offer citations, they cannot properly record its use. The sources for 19th century slang are widespread but a relatively small proportion of these report the language as spoken, the actual sound of the street. One group who did may be termed the pioneer sociologists, or as some prefer it, given that the discipline was still unformed, the higher journalists. Of these none, even his direct successor James Greenwood, could rival Henry Mayhew, whose bicentenary passed last Sunday.

Mayhew, born in 1812 and thus Dickens’ exact contemporary, was one of London’s literary phenomena. One of 17 children he rejected his father’s wish that he enter the law and aged 16 turned instead to writing. He edited variously Figaro in London (1835–8), Punch, of which in 1841 he was a co-founder though he departed a year later, the Comic Almanack (1850–51), and the Morning News (1859). He was a widely published freelance. He wrote for the stage – the farce The Wandering Minstrel (1834) plus a number of productions co-written with others – and with his brother Augustus humorous novels – notably Whom to Marry and How to Get Married, or, The Adventures of a Lady in Search of a Good Husband (1848) – and works of travel literature. In portraits he resembles the paradigmatic genial (old) buffer, but he seems less so in life. No-one appeared so sympathetic to the urban poor, yet he castigated those he met and deemed immoral or ‘licentious’ and campaigned, not especially successfully, against their pleasures: the cheap theatre and, even if the realities he would catalogue might at times seem far more lurid, the melodramatic popular fictions known as ‘penny dreadfuls’.

His triumph, and the one piece of work for which he is remembered, was London Labour and the London Poor (4 volumes, 1861-5) . This was based on some eighty-two articles, published between October 1849 and December 1850, entitled ‘Labour and the Poor’, in the Morning Chronicle of which Mayhew was the metropolitan correspondent. Mayhew was not an original – the early 18th century’s Ned Ward and Tom Brown had also walked the London streets bringing their inhabitants to life for an interested audience – nor was his focus on the London poor unique – the 1840s government was looking hard at poverty, and produced a series of Blue Books devoted to sanitation, housing, health, burial and much more. (And Mayhew described his work as ‘the first “blue book” ever published in twopenny numbers.’) The condition of England, and specifically that of its impoverished citizens was becoming of interest: Carlyle had taken a look in his piece ‘Signs of the Times’ in the Edinburgh Review in 1829 and Disraeli’s Sybil (1845) was subtitled ‘The Two Nations’ and showcased the grimmer conditions of the working class. Dickens, who knew Mayhew and may even have drawn on his work, was of course, among so much else, among those pioneer sociologists.

Yet in London Labour and the London Poor, subtitled ‘A Cyclopædia Of The Condition And Earnings Of Those That Will Work, Those That Cannot  Work, And Those That Will Not Work’, and expanded by a fourth volume devoted to Prostitution (although others were enlisted as its writers), Mayhew offered a picture of poverty-stricken London that had never been attempted. Writing in Punch Mayhew’s Morning Chronicle colleague Thackeray, picturing Mayhew as an anthropologist travelling in ‘the poor man’s country’, told how ‘a clever and earnest-minded writer […] reports upon the state of our poor in London; he goes amongst labouring people and poor of all kinds — and brings back what? A picture of human life so wonderful, so awful, so piteous and pathetic, so exciting and terrible, that readers of romances own they never read anything like to it; and that the griefs, struggles, strange adventures here depicted exceed anything that any of us could imagine.’ The flow of praise continued long after Mayhew’s death. E.P. Thompson, writing in 1967, called London Labour  ‘the fullest and most vivid documentation of the economic and social problems, the customs, habits, grievances, and individual life experiences of the labouring people of the world’s greatest city of the nineteenth century.’

Not everyone has been convinced. The critic Gertrude Himmelfarb has savaged the work, maintaining that its title is misleading, it’s ‘sample’ interviewees unrepresentative and its contents and statistical tables unreliable, tainted throughout by ‘fallacies, including arithmetical miscalculations, questionable sources, data pertaining to different periods, and categories added together as if they were all distinct and mutually exclusive.’  And for her the very depiction of the ‘poor man’s country’ was not so much too good to be true, but over-selective,  excessively lurid, too journalistic to be sociologically valid. 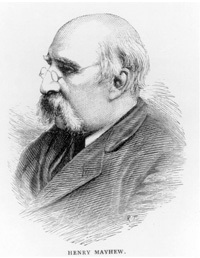 Urban anthropologist, journalist or sociologist, whatever Mayhew’s motives, however meretricious some might find his presentation or invalid his statistical evidence, no one would deny the excellence of his interviews. The power of these interviews, and the language in which they are recounted, is at the heart of the work’s success. It was, as he explained, ‘the first attempt to publish the history of a people, from the lips of the people themselves — giving a literal description of their labour, their earnings, their trials, and their sufferings, in their own “unvarnished” language; and to pourtray [sic] the condition of their homes and their families by personal observation of the places, and direct communion with the individuals.’[1]

As faithful transcription of the interviews required, they are dense with slang, at least 1250 discrete terms.  Mayhew’s interest in specific occupations, and his coverage of those who lived on the margins of, if not wholly beyond the law, means that there is a high volume of cant. Mayhew’s lexis overlaps with Hotten’s Slang Dictionary (1859) on over 530 occasions, and it is possible, given the original newspaper publication of the work in 1851, that his are the first examples of many of the words that appeared in the lexicographer’s work.

This post is a modified extract from my forthcoming Sounds of the Street: A History of Slang (to be published by Atlantic Books)