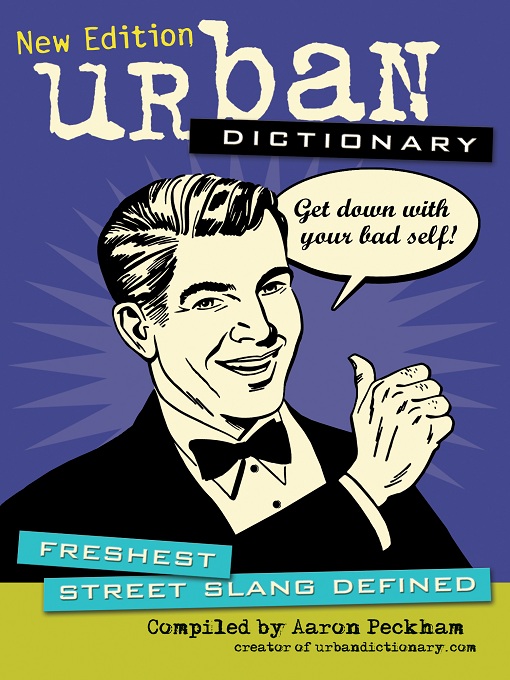 Other than in his own adopted third persona, and the occasional reference to Mr Meades who is a friend as well as a minor deity (a fact currently echoed in seemingly every medium) Mr Slang does not drop names. It is time to make an exception. An exception that I would suggest is mitigated by the fact that the name in question – assuming that I assess the Dabbler demographic with reasonable accuracy – will fall with a pretty soft thud. So: I had that Aaron Peckham in the back of my cab the other day. Or to be more precise, I had that Aaron Peckham at the other end of table at a slang conference I attended a couple of weeks ago. Bells unrung? Look him up. No, I’ll tell you; Mr Peckham is the sole progenitor, the one-man originator, the fons et origo of the Urban Dictionary (http://www.urbandictionary.com). The Urban Dictionary, which urges contributors ‘define your world’ and at a rate of 2,000 neologisms  a day has amassed some 6,763,429 definitions (at time of writing) since its founding in 1999, , is currently the Internet’s go-to lexicon. At least in the realm of fresh-minted terminology. It began life as a slang dictionary, slang being a loose synonym of ‘urban’ when it comes to language, but that adjective has been dropped. Journalists, some say of the lazier sort, adore it. It is regularly quoted. It is, unlike products a good nearer Mr Slang’s home, seriously down with the kidz. Indeed it is created by the kidz. Some 6.7 million hits-worth of kidz each and every month even if of every thousand users, only one offers up a new word. How can we not stand in awe.

We do. I do. I stand not just in awe, since as I must have said before, size matters in lexicography, but also at one side – the wrong side, naturally – of a generational abyss. No mere gap but a bottomless pit. If I represent one aspect of slang lexicography, the traditionalists who model themselves on the OED, then Mr Peckham’s legions, the majority of whom are aged 14-25, represent the antithesis. I am looking at the end, they have barely essayed the beginning. Mr P. is a charming young man (he is 31) and he was gratifyingly tolerant of us old folk.  I admire his enterprise. Like many Internet creators he has conjured something substantial where once stood nothing at all. He funds the project through ads, but resists the many dubious supplicants – often politicians or tacky and not so tacky merchandisers – who offer him rewards for turning over UD to their exploitation. He founded the site to stand against what he saw as old people’s hegemony of definition: why should you tell us what we say means? It is a good Sixties conceit, the sort that underpinned the underground press for which I laboured. He maintains his position and thus his credibility. I like his style.

But awe is one thing, intellectual trust is quite another. Credibility is admirable but nebulous: my problems lie in the concrete. If it cannot provide authority, what is left to the dictionary? Spelling is simply not enough. If its definitions cannot offer some form of accuracy, of ‘truth’, then what is their purpose? The dictionary is a tool, the tool should do its job and the job is providing information one can trust. It may err, but it is hoped that these are errors of omission not commission. Like Dragnet’s Joe Friday the lexicographer aims for ‘the facts, just the facts’. New facts, of course, may overturn their predecessors, especially in the sphere of dating, which can always be pushed back a decade or more. Thus the traditional lexicon.

The Urban Dictionary does not, let us be quite blunt, give a fuck for all that. Look up an entry. See how it works. Here is a definition. Now here is another, and another and yet others too. They may jibe with one another, they may not. They may contradict. All that differentiates them are a pair of icons: thumbs up and thumbs down. One can see by the appended numbers which definition the UD-ers  prefer. But other than by checking the respective counts (and ‘downs’ may challenge ‘ups’ quite closely even in what those of us who still trade in such value judgments might see as the ‘right’ definition) there is no verdict. Merely the varied opinions of the UD crowd. Far from playing the traditional dictionary it is relativism epitomised. All are qualified, all are welcome, there is no comment, and defining is free. Like the Internet of which it plays a part, no-one has the right to mount a platform and dictate. Or if they do, no-one will listen. One might call it the wisdom of the crowd. One might call it the country of the blind, without even a one-eyed man to be king.

I railed at Mr Peckham on this account. I asked, and I was not alone, merely the most vociferous, how could he term his website a dictionary when by every standard it is patently no such thing. He was quite candid. The term dictionary gave the website authority; the fact that it was consciously pitted against the traditional variants of that authority was a paradox which he fully appreciated. He had no intention of abandoning that useful noun.

Later, we were drinking, I part apologised. What he heard from me, I explained (though he had doubtless worked it out unaided) were the words of a frightened old man who had glimpsed the future and found it shocking. The earth was moving and not in what a punster would term a Hemingway. The old man seemed to have no place in the new world and his feet no longer held him steady on a shifting terrain. His life, his work – and he had long since given up attempting to differentiate between the two – were under threat. Or maybe not even under threat, merely by-passed by the rush of a new, younger, otherwise focussed crowd.

I have wondered who will succeed me in the slang lex. world. It is half a millennium old; surely it is not due for extinction. It may be that my answer lies in Mr Peckham and the Urban Dictionary, with its non-judgmental acceptance, its all-encompassing welcome for both contributors and language, its prizes – inclusion – for merely turning up. It may well be. But I hope, I do really hope, that it is not.

12 thoughts on “Urban Dictionary: The Folly of Crowds”