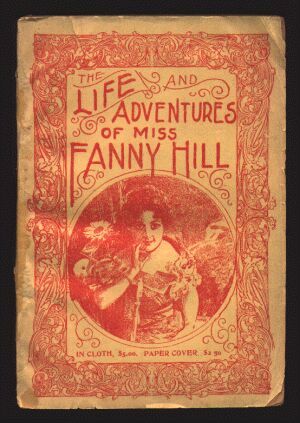 This week Jonathon Green salutes the author of Fanny Hill, a book with a single aim: ‘to write about a whore without using the language that was seen as part of her stock in trade’…

It is my intention to review, perhaps next week, Emily Brand’s new study of the Georgian Bawdyhouse. My failure as yet to read the text should not, were I a professional (let alone a sock-puppet), stand in the way, but I am foolish and feel the need to peruse. Instead I offer as an amuse-bouche a few words on the era’s John Cleland, author in 1748 of Memoirs of a Woman of Pleasure (generally known as Fanny Hill) and as such perhaps the only writer have created a pornographic book which is completely without obscenity.

Not that there was yet a proper definition of ‘pornography’ (its first use is in 1842) nor yet the sort of ‘obscene publications’ legislation that was passed in 1857 and revised in 1959. That said, the printers of Cleland’s book, which appeared in 1748, were charged with producing an obscene work, and were found guilty. Cleland himself renounced the novel as ‘a Book I disdain to defend, and wish, from my Soul, buried and forgot’ and it was removed from circulation, remaining off-limits until 1966. It was alleged that Cleland was paid off to avoid his writing any more ‘obscenity’ with a government pension of £100 a year for life. If so he must have squandered it: he died poor in 1786.

Such was the future. In 1748 he had a single aim: to write about a whore without using the language that was seen as part of her stock in trade. He does not, of course, escape slang’s inevitable themes. Thus the penis (‘an object of terror and delight’) is variously an axe, a battering ram (with, like all the erections we encounter, a scarlet ‘head’ be it ‘ruby,’ ‘vermilion,’ ‘flaming red’ or whatever), a red-headed champion, a ‘delicious’ stretcher, a ‘stiff, staring’ truncheon, and a ‘terrible’ weapon. It can also be an engine (invariably ’wonderful’, ‘thick,’ or ‘enormous’), a machine (whether ‘unwieldy’ or ‘formidable’), an instrument, a picklock (the labia being ‘soft-oil’d wards’ which it opens) and a wedge. If the penis is a conduit-pipe (and elsewhere a pipe), then the vagina is the pleasure conduit. It can be a staff of love, a sensitive plant (a contradictory image, since the standard version shrinks rather than grows when touched), a wand, a white staff, and, less obviously a fescue (an old term that plays on its standard meaning: ‘a small stick, pin, etc. used for pointing out the letters to children learning to read; a pointer’) one of the wide selection of penis as pointed instrument images. Morsel is also on offer, but doubtless Fanny is only being figurative (in one thing Cleland is faithful to the porn tradition: no-one is ever under-endowed), and the morsel is being ‘engorged’ by her delicate glutton or nether mouth.

Fanny, being a professional, is obliged to be ‘up for it’ but she differs from most of her peers, at least as recorded, in enjoying the sex and having orgasms. But as slang (and pornography), even euphemised, makes sure, the over-riding image is of the submissive female, even slightly reluctant; her honour or at least her body always requiring a degree of force. Thus the vagina is the ready made breach for love’s assaults, the furrow, which ‘he ploughs up’, the saddle (‘He was too firm fix’d in the saddle for me to compass flinging him’). Its physical nature and bodily position are emphasised: the central furrow, the centre of attraction, the ‘soft, narrow chink’, the ‘tender cleft of flesh’, the ‘cloven stamp of female distinction’. It is also a hostess for sexual enjoyment: mount pleasant (used in the plural form for the breasts), the seat of pleasure, the pleasure girth and pleasure pivot. It is a jewel (though lady’s jewels, like the later family ones, are the testicles), the maiden-toy, the main spot or main avenue and the mouth of nature. It is also, and here one may note Cleland’s consciously punning name for his heroine, which might be ‘translated’ as ‘Mount of Venus’, the fanny. All of which imply pleasure and enthusiasm. Only in the use of pit, slit and slash does he present another slang trope: the vagina as wound (and Fanny calls it that too) and threatening, unfathomable abyss. The testicles are the tried and tested balls, not to mention  the treasure bag of nature’s sweets. The pubic hair is moss or a thicket.

As for intercourse, one finds fall, as in ‘give her a fall’, and nick and nail, which echo the slang theme of sex as man-to-woman violence . The orgasm is a let-go and to have one is to go or go off. The released semen is an injection (‘His oily balsamic injection mixing deliciously with the sluices in flow from me’). The stallion capable of two consecutive bouts, is ‘loaded for a double-fire.’

Finally the house of conveniency (a house of convenience was merely a privy) where Fanny works. Run by an abbess or mother its employs hackneys (like the hackney horse they are ‘for hire’) and misses of the town and opens its door to cullies (a word that fittingly means a gullible fool as well as a whore’s client).

Whether one dismisses Cleland’s language as over-wrought and at best material for latterday parody or, like the new DNB ‘a stylistic tour de force, employing a dazzling variety of metaphors for parts of the body and for sexual acts,’ its euphemistic role remains undeniable. Though it is hard for what are perhaps the coarser sensibilities of modern life to see quite how anyone derived sexual thrills from his elaborate phraseology and protracted but strangely ‘hands-off’ copulations.

Cleland’s work is ‘literature’ now, but in its day it was scarcely better respected than such pornographic staples as Fifteen Plagues of a Maidenhead or The School for Girls. It was certainly prosecuted with similar vigour and for all his denials, Cleland remained branded with the reputation of his only really major work. The use of euphemisms may also be tied to another aspect of Cleland’s writing, his claim that he only wrote of vice to expose its evils. As Fanny herself puts it ‘If I have painted vice all in its gayest colours, if I have deck’d it with flowers, it has been solely in order to make the worthier, the solemner sacrifice of it, to virtue.’ Like the old News of the World, Cleland ‘made his excuses and left’, but not before telling the story, and embroidering it in euphemistic language that while technically ‘clean’ leaves no doubts as to its intent.