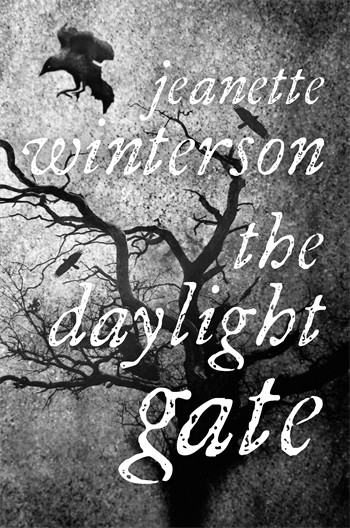 To completely misappropriate Jack London –  “You can’t wait for inspiration, you have to go after it with a club.” and, in the spirit of all things dabblerish, we went about setting up our Dabbler Book Club for the purposes of sharing inspiration and information with our fellow Dabblers. This month we’ve managed to get our paws on 10 copies of Jeanette Winterson’s soon to be released horror novel, The Daylight Gate, already exciting the critics with its dark  re-imagining of the Pendle witch hunts…

A mysterious gathering of thirteen people is interrupted by local magistrate, Roger Nowell.

Is this a witches’ Sabbat?

Two notorious Lancashire witches are already in Lancaster Castle waiting trial. Why is the beautiful and wealthy Alice Nutter defending them? And why is she among the group of thirteen on Pendle Hill?

Elsewhere, a starved, abused child lurks. And a Jesuit priest and former Gunpowder plotter, recently returned from France, is widely rumoured to be heading for Lancashire. But who will offer him sanctuary? And how quickly can he be caught?

This is the reign of James I, a Protestant King with an obsession: to rid his realm of twin evils, witchcraft and Catholicism, at any price …

How to get a free copy of The Daylight Gate by Jeanette Winterson
If you are already a member of the Dabbler Book Club you will automatically be entered into the draw. If you haven’t already joined, all you have to do is sign up below. It’s free.

After that, you don’t have to do anything. All members will be automatically entered into the ballot for one of 10 free review copies, which will take place on Thursday 16th August. We’ll email the winners, at which point you can opt out if you really don’t want that month’s choice and would rather another member got the chance.

We’ll be reviewing The Daylight Gate in the next month or two, and you can contribute your thoughts (though you’re not obliged to.)

Thank you to our friends at Cornerstone for kindly providing the copies.

Ts &Cs: All entrants will automatically be entered into the Dabbler Book Club. This means that you will receive occasional emails from us about the next monthly book and other offers. However, we will not pass your details on to any third party and you can unsubscribe at any time by emailing editorial@thedabbler.co.uk and requesting to be unsubscribed. Winners will be drawn at random from the Dabbler Book Club members at 12pm on Thursday 16th August 2012. The judges’ decision is final. The Dabbler reserves the right to offer an alternative prize or to offer no prize and withdraw the competition at any time for any reason. More competitions are available at Free UK Competitions.