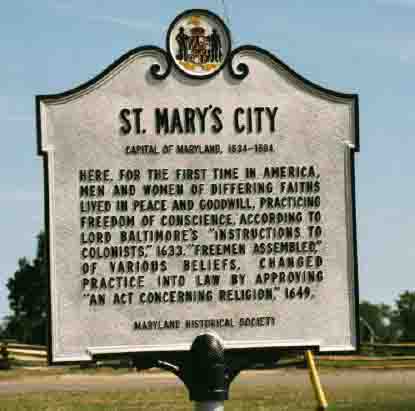 Today’s Dabbler letter from America finds the site of America’s first experiment in religious liberty in an unexpected place..

John Pendleton Kennedy’s 1848 novel Rob of the Bowl has all the hallmarks of overwrought Gothic historical fiction.  A haunted chapel, mysterious blood stains, an evil pirate named Cocklescraft, the beautiful daughter of an aristocrat, a duel, and the reappearance of a long-lost son.  More unusual is the novel’s background, a Puritan uprising against Catholic rulers in 17th century colonial Maryland.  I came across a reprint of this long-forgotten romance in the gift shop of St. Mary’s City, now an archaeological site in the beautiful tidewater region of Southern Maryland near the confluence of the Potomac River and the Chesapeake Bay.  In the same shop I purchased a replica of a rosary found on the site – a one decade rosary with a ring that was moved from finger to finger until all five decades were recited. No doubt Catholic settlers brought it, and others like it, from England.  Such a rosary could easily be concealed in the hand, a useful feature in England where the public practice of Catholicism was banned at the time. Obscure little St. Mary’s City, founded by Catholics, is ironically the site of America’s first experiment in religious liberty.

I ended up spending most of my life in Maryland because every time we drove into Virginia we got lost.  Transplants from the west coast, we arrived in the Washington D.C. area, as so many other young professionals do, for a government job.  Gentrification by urban pioneers was still in the future and we understood from friends that only the very poor or the very rich lived in D.C.  We would have to choose between the Maryland and Virginia suburbs.  Apartment ads in hand we set off to explore our options, but the tangled Virginia roads, seemingly all in a state of constant construction, defeated us.  Maryland’s broad highways slicing through the countryside to spacious new suburbs seemed bland, but livable.  So serendipitously I became a Marylander and discovered that the history of the state matched my interests in unexpected ways.  Raised a Catholic and steeped in the history of the English Reformation since university days, I have read everything I can over the years about 16th and 17th century England, particularly the religious conflicts.  My favorite nonfiction book is The Voices of Morebath: Reformation and Rebellion in an English Village by Eamon Duffy.  It is well worth learning far more than you ever wished to know about sheep farming in Part 1, so you can understand in Part 2 how the parish accounts illuminate religious change. Some scenes are unforgettable: a parish priest left hanging for days from the spire of his church, parishioners taking their statues of the Virgin out of hiding when Catholic Mary inherited the throne.  Maryland history is inextricably linked to this England.  But unlike the New England Puritans who were still busy suppressing dissent and burning witches, the Catholics of Maryland espoused freedom of conscience.

It was Charles I who granted a charter to the Catholic Lord Baltimore, Cecil Calvert, who in gratitude named the new colony after Charles’s wife, Queen Henrietta Maria.  No, Maryland is not named for the Virgin Mary or the Catholic Queen Mary, two common misconceptions.  Cecil’s brother Leonard led the first group of settlers who sailed from Cowes in 1633 on the Ark and the Dove, landing at St. Clement’s Island on March 25th 1634, where, for the first time in the colonies, the Catholic Mass was celebrated.  Soon the new capital of St. Mary’s City was established on the mainland.  Today the city is gone, but because it was abandoned rather than built over, archaeologists have the best-preserved remains of an American 17th century town available for study.  They discovered it was built according to an Italian Baroque plan of two triangles meeting at their points in the town center, one triangle for civic buildings and the other for religious buildings, a physical division reflecting Lord Baltimore’s dream to separate Church and State.  The statehouse, the chapel, and the framed outlines of some other buildings have been reconstructed, looming like ghosts over the site as the visitor wanders the well laid out streets.  Gazing across the peaceful river views and bucolic fields, it seems possible to believe that this was once the scene of religious tolerance and harmony as recorded on the historic plaque:  “Here, for the first time in America, men and women of differing faiths lived in peace and goodwill, practicing freedom of conscience.” But dig a little deeper and the picture is not quite so rosy.

The Maryland colonial assembly’s 1649 “Act Concerning Religion,” known as the Toleration Act, started out with language rather surprising for a message of tolerance.  The death penalty was recommended for anyone “who shall from henceforth blaspheame God, that is curse him, or shall deny our Saviour Jesus Christ to bee the Son of God, or shall deny the Holy Trinity….”  So tolerance was certainly not granted to non-Christians or dissenters who strayed too far from key doctrines.  These early Marylanders did not envisage a synagogue or a mosque alongside their chapel.  But the act did go on to grant Christians of various denominations the right to worship freely.  Toleration had its price, however, for Catholics in Maryland were soon far outnumbered by other groups fleeing persecution, including Puritans from Virginia.  In 1650, empowered by Cromwell’s Commonwealth in England, the Puritans staged a revolt and replaced the Catholic government.  Now those who had benefited from toleration repealed the Toleration Act; the persecuted became the persecutors.  In 1658 the Calverts briefly regained control, but by 1692 the Puritans were firmly in charge, burning all the original Catholic churches to the ground “to prevent the growth of Popery within this Province.” In a move chillingly prescient of China’s Cultural Revolution, Catholic children were encouraged to rebel against their parents.  St. Mary’s City was abandoned and the capital of Maryland moved to a Puritan stronghold renamed Annapolis after Princess Anne, the future Queen.

By the time John Pendleton Kennedy used this episode as the background to his novel, separation of Church and State was enshrined in the Constitution.  But just as the early settlers were unable to leave the religious conflicts of the Old World behind, so today the arguments over religious liberty go on.  Dominionists plan to turn America into a Christian Nation governed on biblical principles, politicians warn of the dangers of Sharia Law, Muslims face the same kind of suspicion as the Catholics of the 17th century.  If you read too much history of religion you can lose your faith, not in God perhaps, but certainly in humanity.  Much better to pick up some escapist fiction.  How about a swashbuckling romance about pirates in early Maryland?