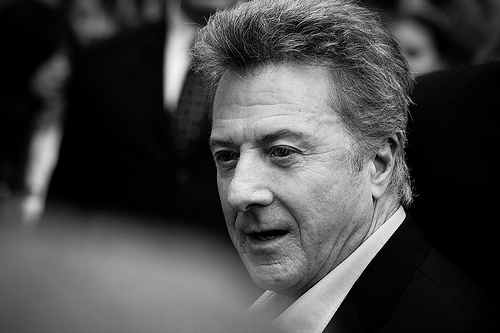 On his birthday we pay tribute to a great actor – and one of life’s scrappers.

Dustin Hoffman celebrates three-quarters of a century this month. Obviously a great actor, but just as obviously quite funny looking. He had to wait until he was 29 for his break – in The Graduate – and no-one can say he didn’t pay his dues:

For five years, Hoffman scraped together a bare subsistence living in New York City. He got a handful of tiny parts, mostly one-shot guest appearances on New York-based TV series…Hoffman worked as a waiter, as a toy demonstrator at Macy’s, as an attendant at the New York Psychiatric Institute, and as the only male typist in the steno pool at the Manpower temp agency. When jobs got really scarce, he would sleep on Gene Hackman’s kitchen floor. And on the few occasions when he was able to get an audition, he was turned down every time.

He decides to give up acting – ‘to the extent that you can quit something you’re not doing’ – to try to get into directing. But then he gets a break, an audition for a part in a very Off-Broadway production:

The role for which Hoffman read was Immanuel, a handicapped, cross-dressing German who was living with an American soldier in the ruins of Berlin after World War II. “He just walked in off the street”, says Ribman [the playwright]. “And we knew instantly he was Immanuel”.

I wonder whether Hollywood stardom can still come to such an unlikely candidate.

From ‘Scenes from a Revolution‘ by Mark Harris.