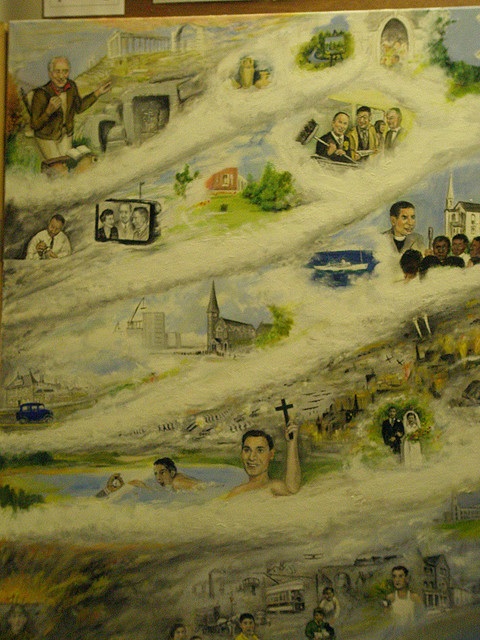 Should you want to visit the coast but stay indoors out of the sunshine why not take a trip to a seaside museum? Anne Ward, author of the Nothing to See Here blog and book, offers a suggestion.

The Musgrave Collection in Eastbourne is a true one-off, just like its owner, 94 year old George Musgrave. Who is this man and why does he have his own museum, you say? Well, it’s a long story.

To start at the very beginning, the first exhibit is dedicated to The Dad I Never Knew – George’s father who died in WWI when George was only two years old. Next, fast forward to the 1950s with display cases full of plastic moulds, scenery and miniscule model figures that George designed for commercial toy manufacturers in the 50s and 60s. The “Swoppets” that he designed for Herald Miniatures are fabulous things – tiny cowboys and Indians run amok along the shelves, so animated in appearance that I bet they come alive at night and continue their battles. The original models, painstakingly created from wire and Plasticine show that this is a man with a creative mind, a steady hand and an eye for detail. After this, in a bit of a curatorial non-sequitur, are miscellaneous paintings of people, animals and Patcham Windmill near Brighton where George lived and exhibited until it was subject to a compulsory purchase order. Next, stretching right to the back of the gallery are forty paintings of St Paul – a personal project that took up decades of his life and many research trips to the Middle East and beyond.

I wasn’t even halfway round at this point but already had the measure of the Musgrave Collection – expect the unexpected. Round the next corner there it was – some portraits of famous figures like Michael Grade and Roy Castle and an amazingly detailed, very clever diorama illustrating the four seasons, beside some display cases showing the history of communication and an impressive collection of Roman coins. As a final piece de resistance, his “Speck of Dust” painting (top), completed at the age of 91 shows the whole history of his colourful life in one go. Even here there are more surprises like his invention of the single yellow line, Olympic swim training and teaching in Africa. It’s a life that has spanned genres, continents and centuries. Blimey. The grandest exhibit, missing on the day I visited is the artist himself, who appears in the museum a few days each week to give visitors a guided tour (although after seeing his work I felt like I knew him already). At 94 he is still active and a new painting created especially for the Eastbourne Festival is proudly on show.

There are grander museums in the world (almost all of them, in fact) but what The Musgrave Collection lacks in big name artefacts, air-conditioned galleries and interactive exhibits it makes up for in sheer charm and chutzpah. The man-hours that went into this are staggering. If every 94 year-old made a museum of their life I imagine it would be pretty interesting but few could match George Musgrave for imagination and determination. He’s got his own 15 minutes of fame here. If there is ever a rating scale for Nothing-To-See-Here-ness it will be called the Musgrave in his honour.

4 thoughts on “The Musgrave Collection”