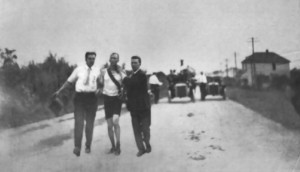 Following Frank Key’s post earlier this week, you may be interested to hear about Tom Hicks, the Olympic Marathon champion of the 1904 St Louis Olympic Games. Having been helped by his trainers into the stadium (see above), Hicks collapsed on the finishing line and the medal ceremony was delayed whilst he was revived. He had “received several doses of strychnine and brandy throughout the race to increase his endurance.”

See Tom’s photograph, along with many more examples of performance and body enhancement at the forthcoming Wellcome Collection exhibition – Superhuman, which opens on 19th July and runs until 16th October.

Devices to help gain competitive advantage on show will range from training shoes, isotonic drinks and blade legs to curious contraptions such as the Whizzinator – a false penis designed to dodge doping tests by delivering clean urine.

Please don’t try this at home…