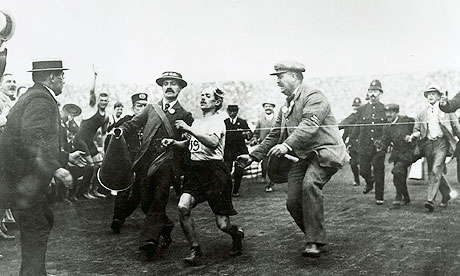 Here’s your chance to get involved with the Olympics! Why not join Frank in feeding strychnine to the marathon-runners?…

Well, it took a seemingly endless series of lengthy phonecalls with Seb, but I am delighted to announce that I have won my Olympic contract. The company I set up, Key Marathon Refreshments, will be the official supplier of snacks and beverages to the Marathon runners during their twenty-six-mile slog. Now all I have to do is to recruit a team of little helpers, like Santa’s elves, to fan out along the route, ready to press our snacks and beverages into the outstretched hands of stumbling, exhausted, and hallucinating runners. The helpers’ bibs and tunics are currently being stitched and sewn by indentured orphans in a secret underground facility. If you would like the chance to be on the team, please leave your details in the Comments. Previous experience of handing out snacks and beverages at a major sporting occasion will be looked on favourably.

In spite of the ballooning cost, there was much talk of hosting an “Austerity Olympics”, taking the 1948 London Games as a model. For me, this was far too modern. Part of my pitch to Seb was to insist that we go further back, to before the two world wars, and to take as our model the 1908 London Olympics. This was an age of true amateurism, of doughty athletes in baggy clothing who arrived at the stadium on the same omnibuses and charabancs as the crowds, when everybody had stiff upper lips and smoked like troopers.

Hence my menu for the Marathon runners’ refreshments is identical in every respect to what their 1908 forebears got, to wit:

Absolutely true, as noted in The First London Olympics 1908 by Rebecca Jenkins (2008). I must admit I am sorely tempted to up the dosage of strychnine.