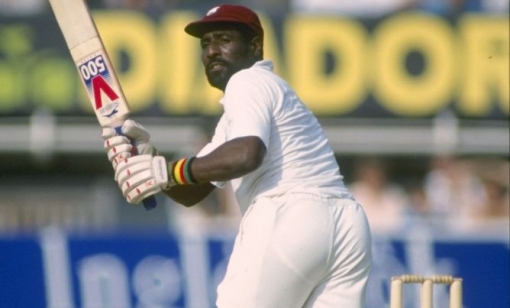 When he went to the ring, he was often smiling. He knew that when the heavyweight champion of the world defended his title, it was a solemn moment, but he found it hard to forget how strong he was.

Good that, isn’t it… AJ Liebling wrote it about Rocky Marciano, but it might just as well be about Isaac Vivian Alexander Richards walking out to bat. He was usually chewing gum instead of smiling – although the flash of teeth from underneath that Roman nose sometimes gave the impression of one – and his journey to the wicket was inordinately slow for the entrance of a gladiator.

‘Hurry up,’ someone in the Yorkshire crowd once heckled. ‘That’s why,’ Richards said, ‘when you look at records and things, and you see the record of Vivian Richards against Yorkshire, I could be high up where averages and runs are concerned’.

I met him last year. It was on a flat, cold morning at the University of Surrey, and he’d come straight from the airport to a reception to promote the Antiguan Olympic team’s use of the facilities there come 2012. The room was full of journalists and local radio and TV people, and I heard him before I saw him. He was talking to a young and beautiful radio reporter standing somewhere towards the side of the bar. ‘My full name,’ he was telling her slowly, ‘is Isaac Vivian Alexander Richards… It’s a very long name, isn’t it…’ He left an arch pause before breaking into that unmistakable, high laugh.

He was 58 then, almost 59, but aside from the smallest fleck of grey in his goatee, he looked the same as he had when he retired from cricket in 1991, head shaved, face unlined, eyes bright and dark, stomach washboard flat and shoulders and waist still ascribing the perfect ‘V’ of a middleweight boxer. He’d famously never been inside a gym, but those boxing references just kept on coming. Some who knew him well called him ‘Smokey’ after Smokin’ Joe, with whom he’d shared such indomitable spirit. To everyone else though, he remained simply King Viv, destroyer of bowlers, avatar of modern batsmanship. Even the knighthood, which he shrugged off [‘Hi man, hi… call me Viv’] didn’t seem quite enough. King Viv it was, and is.

I’d known for a while that I might be able to speak to him, and I knew exactly what I was not going to say: that the first three times I saw him bat, he made 291 at the Oval, 138 not out at Lord’s in the World Cup Final and 118 in a Benson and Hedges final for Somerset a couple of years later – ‘You see, Viv’, I was definitely not going to tell him, ‘you were getting worse every time…’

We sat down at a small table overlooking some plastic hockey pitches. He was drinking orange juice. ‘You know Viv,’ I heard myself saying in a voice that seemed to come from a distant, empty room, ‘the first three times I saw you bat…’ He listened patiently. ‘…So you see,’ went the voice that was apparently mine, ‘you were getting worse every time…’
He looked at me for a second, glanced down at his juice… and then smiled. It felt a bit like like I imagine getting off the mark in your first Test innings feels. We had some common ground – not a sentence you can utter every day – in that we’d both been to Alf Gover’s cricket school in Wandsworth; he reminisced about the eggy smell of the old gas lamps that lit the place and the penetrating winter cold that took until lunchtime to lift, and remembered lovely, Patrician Alf and his famous ‘one to drive…’

What he recalled most about that 291 at the Oval was also something sensory: how hot and brown the pitch was; how un-English. We spoke for about 15 minutes, I suppose, and he said something I’ll never forget, a phrase that serves as an epitaph for his epic career: ‘You see,’ he said, ‘with the bat, I was a soldier…’

6 thoughts on “Viv Richards: A Meeting with the King”