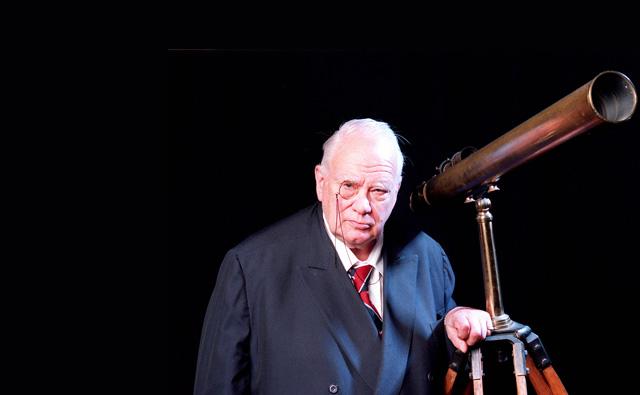 Luke Honey writes about food, drink and the finer things in life over at his blog The Greasy Spoon. Today he veers away from victuals and reacquaints himself with a national institution…

We’ve just had a most entertaining half hour or so watching “The Sky at Night”, apparently the longest running television series in history.  Could this be the last bastion of English amateurism?  The BBC films the programme in sunny Selsey, West Sussex-  using the oak panelled dining room of Patrick Moore’s thatched and lattice-windowed cottage as a studio.  It’s terribly chintzy:  like a set from “The Mousetrap”, circa 1952.  Sir Patrick, now a splendid nonagenarian, cuts a dash in his egg-stained Air Force tie, monocle and clipped (albeit, slurred) tones amongst the spotty, bemused professional anoraks of the astronomical world.  His croquet lawn is littered with telescopes and observatories.  The low-budget lighting and shaky direction give the programme a certain je ne sais quoi:  it’s all slightly bonkers.

I like enthusiasts.  Why is that television presenters of this persuasion always seem to live in Sussex or, failing that, amongst the rhododendrons and silver birches of Surrey?  I’m reminded of the equally splendid Robert Alexander Baron Schutzmann von Schutzmansdorff, aka Bob Symes, the avuncular and tweedy presenter of the 1970’s series “Model World”, he with the buttery, exceedingly good voice, Tsarist beard and gauge one model railway running through the laurel bushes of his garden.  I seem to remember that his shed doubled as a signal box.

Several years ago, I was at a memorial service- for my great uncle, I think, and fell into a chat with some nice old buffer, who looked as if he could be a judge, or at least, if he wasn’t, should have been.  “Tell me, my boy”, he said, fixing a look at me over his half-moon glasses, “what are your hobbies?”  I was slightly taken aback, but it was a good question.  Do people have hobbies anymore?  I’m not sure that they do. Bird egg collecting and butterfly hunting are, of course, now taboo, and I suspect that today, any child of ten years old who collected stamps in a serious way, might be looked upon as slightly odd and even risk ostracisation in the playground.

But that’s the charm of “The Sky at Night”.  It’s not slick, it’s not contrived; it’s endearingly amateur-  and eminently watchable; even if those of us, of a non-scientific bent but seduced by the romance of astronomy, can’t understand a word of it.