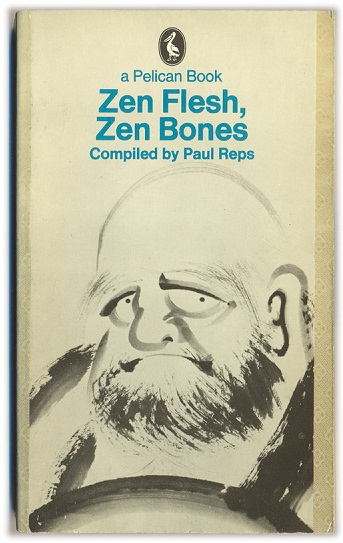 Spiritual enlightenment and the wisdom of the Zen masters – yours for only a penny!…

Keen Dabbler readers may recall my fondness for the joke about the man who has an orange instead of a head. In fact it is not a joke at all but a profound Zen parable. And though it is of course perfect and unimprovable in its form and content, if you were forced to add a line to it, the only possible one would be “At these words he became enlightened.”

This is a common punchline in the collection of excellent unjokes that is Zen Flesh, Zen Bones. You may well have a battered Pelican copy of Paul Reps’ compliation of Zen writings laying about your house somewhere, especially if you or perhaps an aged relative have dabbled in Eastern philosophy or violent martial arts. It may be in a box in the attic, or it might be handy on your bedside cabinet for nightly attempts to achieve universal Oneness before sleeptime.  If not, you can purchase a copy online for a penny, which seems a small but somehow apt price to pay for seven hundred years of Oriental wisdom.

First published in 1957,  it is actually four distinct works complied by Paul Reps, “an American deeply interested in bridging the understanding of East and West”, with help from  Nyogen Senzaki, a celebrated proponent of Zen in the US who as a Japanese infant “was left in a field and found by a Buddhist Monk”  (according to the book’s blurb  anyway; Wikipedia disputes) and who later became “a ‘homeless monk’ wandering over Japan and finally settling in California.”

The first section, 101 Zen Stories, is the best, containing such gems as this:

The Moon Cannot Be Stolen

Ryokan, a Zen master, lived the simplest kind of life in a little hut at the foot of a mountain. One evening a thief visited the hut only to discover there was nothing in it to steal.

Ryokan returned and caught him. “You may have come a long way to visit me, ” he told the prowler, “and you should not return empty-handed. Please take my clothes as a gift.”

The thief was bewildered. He took the clothes and slunk away.

Ryokan sat naked, watching the moon. “Poor fellow,” he mused, ” I wish I could give him this beautiful moon.”

Now you may have just become enlightened simply by reading the above, in which case you do not need to purchase the book or read any further. If not, try this one:

When Banzan was walking through a market he overheard a conversation between a butcher and his customer.

“Give me the best piece of meat you have,” said the customer.

“Everything in my shop is the best,” replied the butcher. “You cannot find here any piece of meat that is not the best.”

At these words Banzan became enlightened.

After the 101 Zen Stories comes The Gateless Gate, a series of problems traditionally set by Zen masters for their pupils, along with an explanatory commentary by ‘Mumon’ that frankly poses far more questions than it answers. Then comes Ten Bulls, a series of woodblock illustrations with supposedly meaningful captions.

In the final, very short section, Paul Reps provides two answers to the question “What is Zen?” Both are brilliant and quite astounding in their clarity, insight and brevity. However, I am not going to tell you what they are. You’ll have to buy Zen Flesh, Zen Bones. You won’t regret the purchase, it is a very short, funny book which will only take all the rest of your life to finish.

If you would like to recommend one of the thousands of great books that can be bought online for a penny, email your review to editorial@thedabbler.co.uk