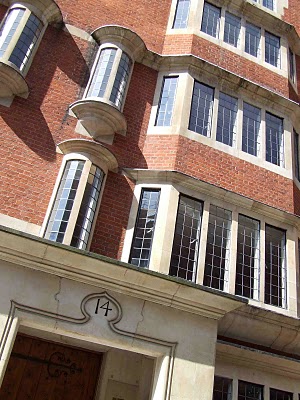 In this series Philip Wilkinson – author, architectural historian and denizen of the wonderful English Buildings Blog – takes us on a journey round some buildings with rather unlikely creators…

Charles Francis Annesley Voysey was one of the great domestic architects of the Arts and Crafts movement, famous for his low-slung, landscape-hugging country houses, with their sweeping roof lines, rendered walls, low-ceilinged interiors, and meticulous details. In designing these buildings, Voysey created a hugely influential style. His ideas – together with those of William Morris and others – influenced the architecture of the garden city and garden suburb movements. With their stress on truth to materials and their purposeful planning, Voysey’s houses have also been seen as precursors of the much more radical buildings of the modern movement.

But at 14 and 16 Hans Road, built in 1891–92 and just a stone’s throw from Harrods, is evidence of what Voysey could do when designing town houses. Here in Knightsbridge, an area where many houses were built in the late-19th century in the ‘Queen Anne’ style, the emphasis is on tall, narrow buildings and the dominant material is red brick, the opposite of a typical Voysey house, in other words, in planning, form, and materials. Voysey picked up with this theme but played his own variation on it, keeping the brick and the tall form of the house, but adding stone dressings, shaped parapets and neat tall oriel windows above the entrances. The house numbers are in cartouches that are shaped using a variant on Voysey’s trademark heart motif, and the wooden doors have striking iron hinges. The houses were designed for Archibold Grove, a Liberal MP and the designs were well liked, both for the elegant exteriors and the internal layout, with most rooms benefiting from plenty of natural light. The overall proportions of the houses were praised in the press, too, as was the restrained use of carved decoration.

Voysey was to have designed the neighbouring number 12 too, but Archibold Grove’s liberality was wanting when it came to the fee, and the architect and client fell out. As a result, the commission for this house, beyond Voysey’s pair in the picture below, went to A H Mackmurdo. It’s a good brick and stone neighbour to numbers14 and 16, but not quite as much of a surprise as Voysey’s tribute to the London townhouse. 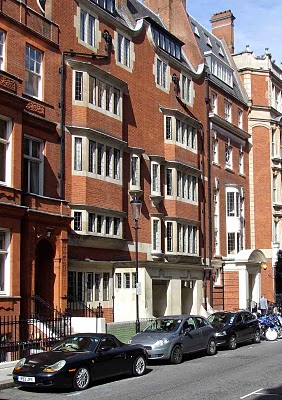 2 thoughts on “Voysey comes to town”