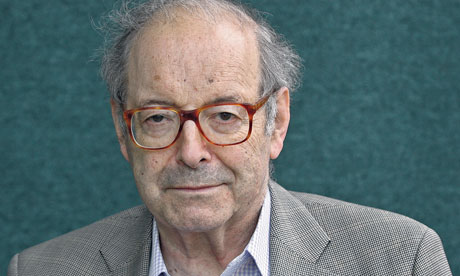 From the Dabbler archives, Rosie Bell’s excellent tribute to John Gross. The post is also notable for concluding with some remarkable lit-crit twaddle from one Dr Dylan Trigg, subsequent star of a Noseybonk episode…

I was sorry to hear of the death of John Gross. His Rise and Fall of the Man of Letters is one of my favourite books and has been since I was a teenager.

We were living in humid Hamilton, New Zealand, a city that was growing fast with wide sticky roads and sprawling ranch style houses. My father was an estate agent at the time and rented out flats, and in one of these he had found a box of books which he gave to me. Among them was a fat hardback – expensive in New Zealand at the time – called The Rise and Fall of the Man of Letters by John Gross.

The Rise and Fall etc is a history of British intellectual life since 1800, with potted biographies of literary journalists and neat, throwaway remarks about the periodicals they wrote for and the movements they were involved in. It is very readable, with an open, tolerant humorous tone. I did not know the voice of the English liberal, but I found it congenial.

The chief practical purpose of literary histories is to teach us something about books that we have never read and probably never will.

Indeed. I knew that one day I should get round to reading J S Mill*. In the meantime I made do with Gross’s synopsis. I trust him since when he writes about authors that I have read – George Eliot, George Orwell – he gives what I think is a fair assessment.

He writes about Carlyle:-

. . . he was very much a portent. He points forward, not indeed to fascism itself, since after all he never crossed over into the realm of active politics, but to the trahison des clercs, the long procession of artists and intellectuals whose hatred of the modern world has led them to flirt with brutally authoritarian regimes or to clutch at obscurantist dogma. And, as with so many of his successors, the infected areas of his work cannot simply be cordoned off from the healthy. Both are the product of the same fundamentally imperious approach to social complexities, of an imagination naturally drawn to clear-cut diagnoses and drastic solutions, impatient of hedging and compromise. It is so the credit of such a man that he should nevertheless have been willing to prescribe unromantic short-term palliatives (organized emigration, elementary schools, etc.) but this was hardly his first claim on the consideration of his contemporaries, any more than it is on ours. His most enduring distinction as a social critic is to have brought into dramatic focus the ruthlessly disruptive effects of unrestrained laissez-faire industrialism. Trying to describe the larger forces at work in his society, he fell back on metaphors of homesickness, uprooting, disharmony. As metaphors, they are brilliantly suggestive; but as the point of departure for any kind of comprehensive political programme, they need to be handled with care. Like many other romantics, Carlyle ultimately seems to be judging society as though it were an unsuccessful work of art. The analogy is dangerous, since social cohesion can never be as absolute as artistic unity; it will always be easy for those who dream of restoring an organic society to despair, and tempting for them to assume that a deliberately imposed uniformity will come to much the same thing in the end. A romantic is properly concerned with integrity – the integrity of a personality, the integrity of a poem. But politics is the art of rough, very rough approximations; and ever since Plato, the desire and pursuit of the whole has usually turned out, taken far enough and translated into political terms, to be a first-class recipe for totalitarianism.

Well, that was me unconsciously armoured against the ideological interpretations of literature which I later came across when I went to university. And immunised against the revolutionary bugs that floated about in the seventies.

I recently bought the second edition of Man of Letters (reissued in 1991) where in an Afterword John Gross laments the successful colonisation of English departments by the theorists:-

. . . there is a hostility not merely towards the freelance, but towards the free response. For in spite of its apparent variety, a great deal of critical theory is coercive, designed to enforce approved social and political attitudes (roughly speaking, any attitude that rejects ‘traditional hierarchies’). The belittling of the belle lettrist, the person who writes as he pleases, is a bottom a demand for ideological conformity.

The body of theory that has accumulated over the past few years, taken as a whole, seems to me a monstrous excrescence, a vast distraction, a paltry substitute for the experience of literature itself. I believe that in time it will fade, but I am filled with a cold horror at the thought of how much further it could spread before it does.

I’m glad John Gross has read the theorists for me. I’ll take his word for it. When I come across theorists or sons of theorists I find this:-

I am sceptical of this orientation toward the self from the antierioty of the monument. As Donohoe has it, the complex appearing of the monument is only such that it forms a correspondence with the self, with Da-sein. In turn, the objectification of death becomes subjected to an ontic appeal. Not only that, but the temporality of the monument, as stretching beyond time, places the self in a privileged location, insofar as temporality becomes re-presented in and through the self…