This week, the embellishment of monastic chant, and why we have been caught for a thousand years in a very pleasant and rewarding but nonetheless insane digression…

Not long ago I attempted, in a quarterly online magazine called The Junket,  a defence of what we call in Norbiton the Failed Life.

The defence – not much of a defence, really – was built on a discussion of ornamentation in plainchant and early medieval polyphony. The main thrust of the argument was that simple homosyllabic chant, or hymn singing, or music making of any sort (but especially music in an oral rather than a literate tradition), is vulnerable to a sort of psychic itch in musicians or singers or congregations, which leads them, slowly over time, to ornament elements of the tune, and then to embellish those ornaments, and ornament those embellishments and perhaps codify their ornamental embellishments; so that eventually the originating chant – which was really no more than a heightened form of speech – is smothered and forgotten like a coral shipwreck.

All Western art music, it logically follows, is nothing more than a forest of endlessly proliferating variations, at an epic remove, on a body of forgotten Ur-chant. We have been caught for a thousand years in a very pleasant and rewarding but nonetheless insane digression. 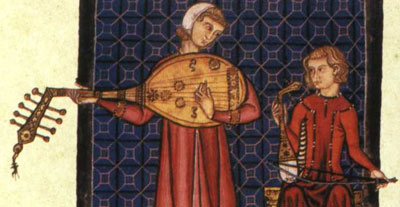 For various reasons, my potted history stopped short in the early twelfth century in Aquitaine, in the region of Limoges, at the monastery of St. Martial, at the point where, thanks to the confluence of a number of striking innovations both in notation and practice, what has been called ‘our modern polyphonic-harmonic sense’ started to take shape.

Among these innovations was a defining shift in the handling of polyphony. Music, including chant, had always to some degree been treated polyphonically: singers would provide a harmonising line (vox organalis) which ran beneath the main line (vox principalis) – in theory either a drone (i.e. on a single note) or a line running in parallel at a fixed interval (fourth, fifth, octave), but in practice a complex rule-bound blend of both.

From the St. Martial manuscripts – four in number, dating from roughly 1100 to 1150 – it is evident that a literal revolution in practice had recently taken place; the two lines are now inverted, the melismatic adornment overlying the chant line: the lines are independent but consonant, so that music, from the twelfth century, is frequently described as an ars combinatoria. But this art of combining is preceded by an art of separation and definition, an anatomy of music, so to speak.

The following example is from the appendix to the Codex Calixtinus, a manuscript lodged at Sant’ Iago de Compostela but probably made in Vézelay, Burgundy around 1170 which has much in common with the St. Martial manuscripts. The lower line is the so-called tenor line (from the thirteenth century it will also be known as the cantus firmus) which holds the chant melody. Passages of chant are also interpolated into the whole.

And this again is twelfth-century polyphony from St. Martial – the interplay of voices, which includes free exchange of role, contrary motion, and accelerating decorative melismas suggest a piece of work conceived as a whole, not elaborated in performance from a single line.

This clear stratification of lines – although not necessarily the complexity of music as a whole –  reached an apogee of artifice in the polytextual motets associated with the University of Paris of the late thirteenth century and early fourteenth centuries (the latter associated with the highly cerebral ars nova movement), in which three (and occasionally four) voices are separated not only in register (higher, middle, lower, known as the triplum, the motetus and the tenor) and pulse (the triplum moving in brisk semibreves and breves, the motetus in breves and longs, and the tenor in perfect longs) but also in text, and even language, as here, for example, where the motetus sings a Latin sermon (against bigamy, for some reason), the triplum a French pastourelle (“In the month of May/When the thrush sings…/Then those in love/Should be joyful”), and the tenor a Gregorian chant melody.

There is a good argument to be made that the polyphonic and especially the liturgical music written between the advent of the ars nova in the fourteenth century and the High Renaissance and Counter-Reformation polyphony of the end of the sixteenth century was, in terms of the complexity of its patterning, more intricately conceived and executed that anything written in the subsequent 350 years, down to the music produced by the Second Viennese School. But it was a tradition conscious of its roots in plainchant. Guilluame Dufay was still writing monophonic chant for liturgical use in the mid-fifteenth century, and Tomás Luis de Victoria, in the final movement of his Requiem of 1605, acknowledged (by no means uniquely) the foundations of his practice by alternating plain chant with passages of polyphonic elaboration.

5 thoughts on “Early Polyphony and the Failed Life”